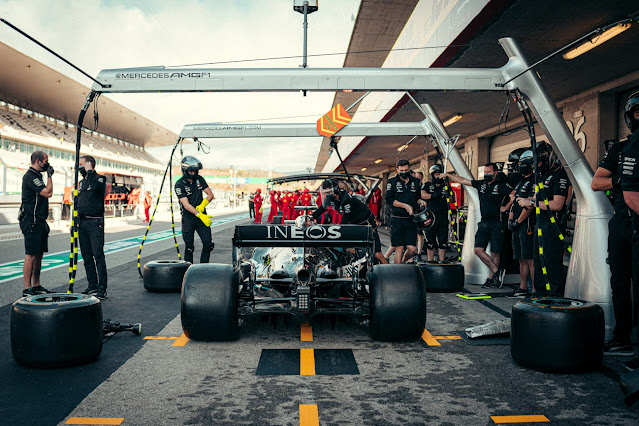 Staggering blue skies, dusted with clouds looked benignly over the sweeping landscape of Portimao, smiling gently as the drivers and teams attempted to come to grips with a brand new (basically), aesthetically glorious circuit in what was increasingly looking to be a highly constrained and insufficient amount of time, at least if you were a team. OF course, as spectators, there is nothing deliciously better than the teams lacking the data as all sorts of surprises start to emerge. Chief among them, the fact that no one seems to be entirely on top of the tyres, as getting the Softs into the window to qualify still seems to be a bit of magic, with some teams requiring multiple laps to get them fully going. In fact, Red Bull, in the form of Verstappen, was just a tenth of Mercedes, despite setting his fastest time on the Medium tyre.

But for those thinking that means Red Bull is favorite for pole, that's an if and only if they can actually get the Soft tyres working, of which there was no evidence whatsoever (save a deleted lap for both drivers) in the last practice session before qualifying. In fact, even in FP3 drivers were still very much trying to find the best lines through corners as teams were trying to work out whether it was going to be a one or two stop and how on earth to manage the front left graining that seemed to be affecting everyone to a greater or lesser extent.

The reason the teams were so behind the 8 ball started with Pirelli running experimental tyres in FP2, which clocked about half an hour from the session, followed by Gasly's car-b-que, which brought out a red flag and then the subsequent collision between Stroll and Verstappen. The fallout from that was no penalty, but Verstappen's comments over the radio and subsequent non-apology apology have certainly become a bit of a topic discussion-wise.

And if that were all, qualifying would be kicking off at the regular time, but the race gods saved the best for the last as in the final minutes of FP3, Vettel, running wide at Turn 14, kicked up a drain cover and ended the session for good, depriving, among others, both Renault drivers of a low fuel Soft tyre run and everyone from having a practice start on the grid. As the commentariat waffled, the marshals and the FIA were on a scavenger hunt for other potentially loose covers, the practice being to drop a pipe in and then cement them over when found, whilst the rest are being welded, glued or otherwise tacked down in a reasonable manner...

Going into qualifying it was Bottas leading the way, a whisker ahead of Lewis with Verstappen just a tenth off, and that time on the Medium tyre. In fact, Albon in P5, Perez in P8 and Ocon in P10 all set their fast times on the Medium tyre so the crystal balls were extra murky even as the finer points of drain covers were being discussed quite seriously... Long run pace also a great mystery and with both the wind and track temperatures being rather capricious, today's spectacle was looking more and more spicy with every passing moment....

Green Light!! Kvyat kicked off the fun as after the extended wait, and abridged FP3, it turns out all the drivers were in a desperate hurry to get going, not withstanding the fact that no one really knew exactly how many laps it was going to be before the tyres actually started working... Perez was the leader early days, 1:18 dead, with Gasly just behind then Kvyat and Raikkonen. Ocon notched P2 then, before his teammate got the better of him by a remarkably slim 0.017 seconds.

In the second wave, Sainz managed to bifurcate the top two, just a tenth back and then Norris split the infinitesimally small gap between the two Renaults...AS the top teams got going, Verstappen was less than a tenth off and into P2 and Leclerc, waving the Scuderia's banner high, rocked up to P3. By this point some teams were having a second go, including Perez who momentarily maintained the top spot as Mercedes got themselves underway. Bottas went to the top as Ocon improved himself to P4 with his second bite at the apple and Hamilton bailed on his first go. Second time was the charm with Lewis going 0.05 seconds slower than his teammate and Norris outdoing Perez for what was at that point P4.

The other end of the field where things were getting desperate, featured Grosjean, Raikkonen, Russell, Magnussen and Latifi, loitering about with 7 minutes left in the session and then the teams began coming in for the interval to right their wrongs and have one last go at the glories of Q2.

Norris led the way for the last chance brigade with 5 minutes left in the session followed by Latifi, and a brace of Renaults, Ocon leading Ricciardo. Grosjean, Raikkonen and Giovinazzi were next, then Kvyat, Albon and Gasly. Stroll and Russell tagged along for fun and as the first hot laps started Ferrari rolled themselves out of the pits and the track came alive.

Grosjean bounced up to P15 whilst Gasly showed no improvement. Albon was up to P6 and Ricciardo went P9. Kvyat improved, but got knocked back down to P13 with a lap deleted for track limit violations. Gasly's second run got him up to P4 and Vettel went P8 while at the back, Russell was up to P15, which put Raikkonen out and that was the end of the session with no more improvements on track. Thus it was that Raikkonen, Giovinazzi, Grosjean, Magnussen and Latifi were going no further and were off in search of some Cataplana to cure their ills while the rest turned it round for the rigors of Q2...

Stroll was first out of the gate for Q2, followed by Kvyat Perez, Gasly and Norris. Vettel, Leclerc, Bottas and Hamilton were next up and then a sizeable gap to Ricciardo, Albon, Russell and Verstappen. The Mercedes and Ferraris were listed as being on Mediums and as the times began to roll in, it was Ocon going out late. Bottas to the top, followed by Perez, Verstappen, Gasly and Albon. Norris rocked up to P3 and it was Hamilton, having some traffic issues getting his time in. But those sorted, he went P2 albeit nearly seconds back. Both Red Bulls ran Soft tyres with Verstappen going P3 and Albon P9.

Ricciardo wound up P10 with Ocon P11 a tenth or so off his teammate and first of those with it all to do. Also on the outside looking in, were Stroll, Kvyat, Vettel and Russell and they rolled back into the pits to make their last adjustments before the final tilt for a chance at the hallowed grounds of Q3.

Gasly led the way then, followed by Stroll and Kvyat. Albon, Ocon and Ricciardo were the next trio then Verstappen and Perez in solo appearances. Leclerc and Norris were next up then Vettel and Sainz forming a nice, mixed ensemble and as they exited the first complex, Gasly was off on his adventure. No real improvement in the first wave and it looked to be just Ocon doing better in the first sector. But across the line, again, there was no improvement though he hit a lot of traffic at the end of his lap. And it was a mixed up, jumbled mess all the way round made all the more fun as Ricciardo had a massive off, through the gravel and into the barrier, just a gentle tap though. The big worry will be the gearbox. Going no further were Ocon, Stroll, Kvyat, Russell and Vettel and they were off in search of some Medronho to drown their sorrows as the rest turned it around for the ultimate palmares of Q3....Mercedes and Leclerc ultimately made it through on the Medium tyre which sets up an interesting start. On replay, it was Hamilton moving out of the way that may have caused a distraction to Ricciardo...

Bottas and Hamilton led the way into the final battle, Bottas setting out first. Behind, it was Leclerc, Verstappen, Perez and Norris. Albon and Sainz were next out and it was just Gasly and Ricciardot in the pits as Mercedes got the party started for real.It was a real back and forth but at the finish line it was Bottas winning the battle of the bankers, by the small but very real margin of 0.047 seconds. Verstappen savagely fought his way to P3, followed by Leclerc and Perez. Sainz then Albon were next, with Albon missing the track limits at T1 and bouncing down to P8.

AS they turned it round for the last go at the ultimate prize on Saturday, Hamilton looked to be out on the Medium tyre, as Gasly emerged for his one go. In the garage, Ricciardo was getting a rear wing replaced, and Sainz was killing it, purpling the first sector and then losing it all through the remainder of the lap and ultimately going a few thousandths slower...

Gasly went P9 as Hamilton was now off in search of pole position, purpling all the sectors and going even faster than Bottas, across the line and P1 as behind his teammate scrambled, with only one bite at the apple due the timing. Verstappen, meanwhile was on a fast lap and as Bottas went to the top. First though, Albon bounced into P4 before Max jumped Hamilton, sending him down to P3 as he was entering the final sector of his last chance.

While he twisted through the final turns, first Leclerc, and then Perez jumped Albon leaving just Lewis, who, after an agonizing wait rocked across the line a tenth up on his teammate, another pole position in his belt, 97 for those who are keeping score at home.

My oh my what a spectacle and with who knows what on tap tomorrow. Hamilton's choice to do 3 laps vs Bottas on 1 lap seems to have been the decisive factor in qualifying but the fact that it was left to the driver just shows exactly how behind the engineers were on their data. Verstappen splitting the Mercs even temporarily was a good sign for the race, but Leclerc in P4 was the big surprise, though on race radio it was Perez lamenting he hated the last sector that might have been the clue we all needed to understand why.

The race tomorrow features 3 of the top 4 starting on the Medium tyre, with Verstappen the odd man out. Given the dearth of long run data and the continuing evolution of understanding the tyres, there's no real guarantee on the strategy front, and the Soft tyre should give an advantage at the start of the race. Theoretically. Maybe. Perhaps. Behind Ocon in P11 will likely start on the Medium, as frankly the Renault looked a bit quicker on that tyre in FP3 and they may well have missed a trick from having a go in the dwindling of Q2. Of equal concern is the fact that Ricciardo failed to make an appearance in Q3 suggesting that perhaps there was a larger issue after his contact with the barrier...

The race gods are also cooperating as the forecast on the morrow is for colder and windier conditions, which will do no one favours with regards to the tyres and even the bestest of boffins, Shovlin from Mercedes, seemed to have no real clue as to whether the one or two stop will be favoured. A difficult track with loads of unknowns, changeable weather, and Hamilton chasing a record surely will be worth watching and if that's not enough for you, then consider how close the midfield battle is in the Constructor's, with Racing Point, Macca and Renault all within 6 points as the races left are dwindling rapidly...