Ferrari were the team that spearheaded an in season testing revival. As most will agree Ferrari have been slow to make alterations to a Formula that now requires a lot more off track aero analysis. They have struggled over the last few years to correlate the data coming from their CFD, Simulators and Wind Tunnel(s) with the real world parts on the cars. A return to in season testing gives them the opportunity to see if/where the numbers stack up.

Mugello offered the opportunity for Ferrari to assess the data in a real world scenario, they took the first 2 days to put some mileage on the car with both Fernando and Felipe using mainly the specification used in the previous races. This gives the team a baseline of data to work from and allows them to better understand the upgrades added on the 3rd and final day of testing.

Ferrari's early season woes have been attributed to many things but their biggest problems have been too much drag, lack of rear downforce and general aero inefficiencies. With this seasons exhaust position/angle rule changes it is more important than ever to focus aero attention in the exhuast region. This is because the exhausted air has the best chance of increasing rear end downforce as unlike the air that passes over the car it is accelerated. Ferrari's design ethos has centered around them enclosing the exhaust within the sidepod tube to try to engage the airflow through the sidepods and converge both flows into a higher density flow. This is known around the F1 paddock as their 'Acer Duct' as the duct carries the technology companies logo. (I will refer to it hear-on as that) 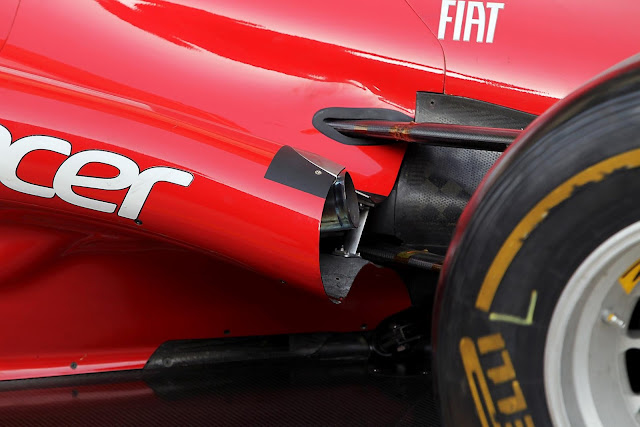 Moving to the front of the sidepod's Ferrari along with most the other teams have adopted slanted radiator designs that slope rearwards (from the top) over the past few years. The reasoning for this approach is it not only reduces the CoG but affects how slim you can make the sidepod vs how much additional cooling space you can make. It does however mean you would have to also reprofile the radiator fin angle in order to get maximum cooling over the surface area. However the team have this year decided to go back to a vertical radiator (as have Sauber who also run the Ferrari V8) perhaps with an eye on more cooling efficiency but also to make use of the aforementioned Acer Ducts. The exhaust will act on the airflow coming through the sidepod entry pulling the airflow through the radiator and onward towards the outlet. The team may have made the switch back to a vertical radiator in an effort to keep this flow uniform whereas the other teams direct their airflow aft of the radiators inbound toward the engine covers cooling exit. To further confirm this theory Sauber's version of the Acer duct is a little higher on the engine cover exiting around the suspension. The idea is that the exhaust pulls the air through the radiator much the same as a fan on a regular road car works (Remember no fans in an F1 car)

So why go to all this effort I hear you say. Well the original Ferrari design ethos was trying to pull as much air as possible over the rear floor in order to seal the diffuser. I'll try to explain Diffuser Sealing better as it's something that's mentioned regularly in F1 circles in a way that in assumed people understand what it is.
The diffuser is one of the most important elements to creating downforce on the car, as air flows under the car the diffuser rises and creates more surface area. Air will always move to an area of lower pressure and as it does so it speeds up, as the area in the diffuser fills more space is available underneath and so the process continues. The faster you can get this pressure moving the better. Above the diffuser area on the car's floor is just as important as you want to create high pressure in this region as it will help speed up the flow beneath. In 2010 we had exhaust blow diffusers which were strategically placed on the floor of the car to speed up flow on the floor creating more downforce. The term sealing the diffuser is creating downforce in the region above the diffuser in order to mirror the flow beneath thus 'sealing' the outer extremities or footprint of the Diffuser. The available area of the diffuser can be altered in order to create this sealing effect but obviously the bigger the diffuser you can utilise and seal the more rear end downforce you can generate. Making exhaust gas manipulation imperative to the amount of rear downforce you can generate.

This years regulations means that we have a return to periscope exhausts and thus the teams have a hard time making the exhaust interact with the floor to generate downforce. McLaren's design is at the forefront as it utilises the 'Coanda Effect' to keep airflow attached from the top of the sidepods and from around the sidepods and bending it down onto the floor area. Ferrari's original design attempted to do so too but the lack of exhaust effect on the sidepod flow means the air detaches and doesn't follow the contours of the sidepod under the Acer duct. 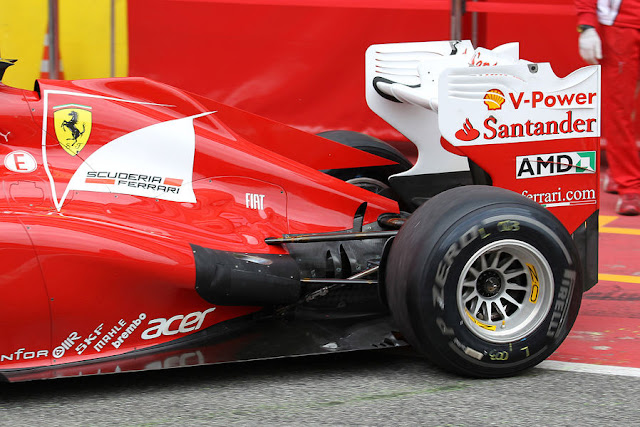 The Mugello spec exhaust is designed to keep the airflow attached from over the sidepod and then interact with the radiator exit (which has been narrowed) pulling the airflow down over a more central section of the sidepod. The new Acer Duct / Exhaust configuration should be more beneficial than the original iteration as the Acer duct is shorter and should help pull some of the air around from the side of the sidepod under the Acer Duct. We may see Ferrari play with other exhaust positions more tilted towards the side of the Acer Duct in order to promote that flow.

In my opinion Ferrari may be better placed to reshape the radiator exits to where Sauber have theirs leaving a more open ended solution available for the exhaust outlet.

The new engine cover features a bulbous section just ahead of the shark fin which looks to me like it may have something to do with the the tubing that comes out of the airbox outlet and runs into the crash structure. I need some more pictures to confirm but I imagine the tube blows under the re-profiled/lifted/cupped section in the centre of the beam wing. 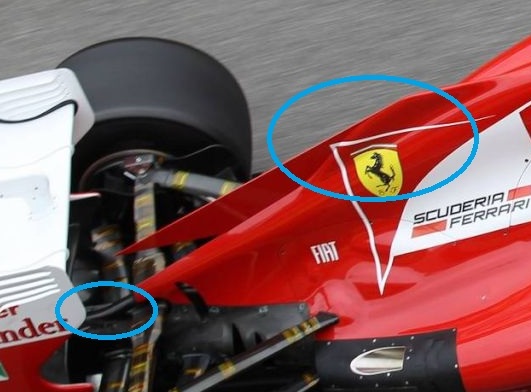 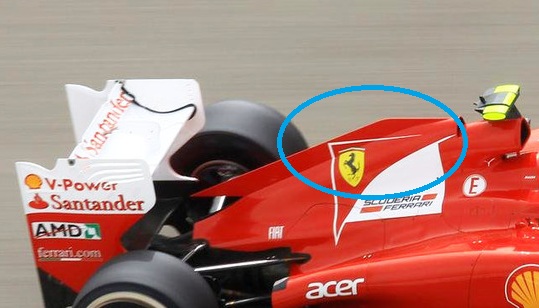 The new rear wing endplates have an extra louvre at the front edge and their profile has been flattened whereas the old louvres curved downward. The endplate strakes have increased from 2 to 4 and increase in size as they come away from the main endplate. 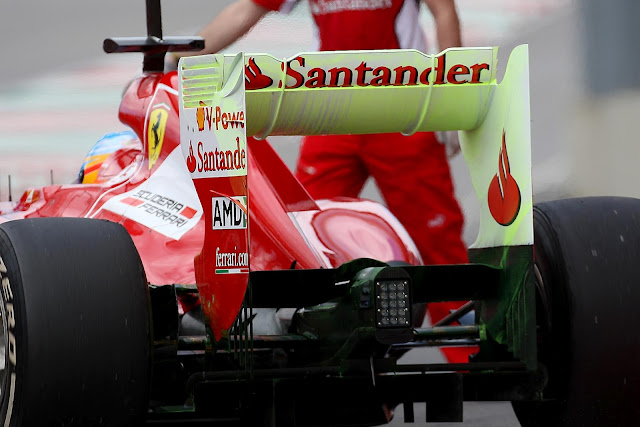 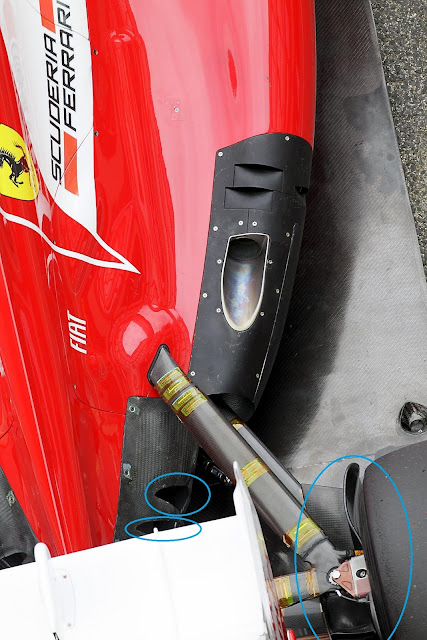 You will also note from the picture above that Ferrari have some cutouts in the lower cooling outlet which will interact with the the airflow and energize the flow inbound.

In summary I believe this iteration will give Ferrari a much needed jump in performance and a better base to move forward in terms of development.