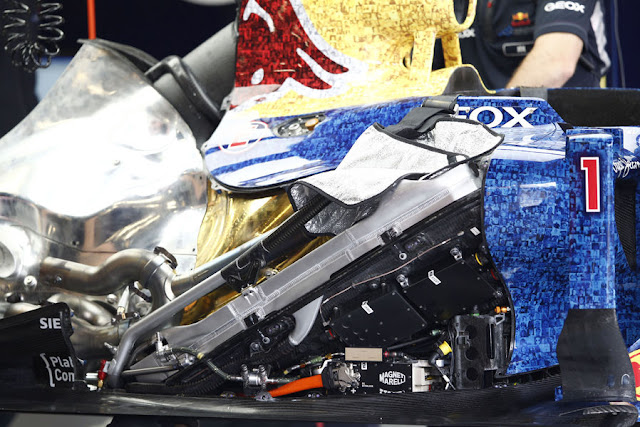 Above: The original picture from AMuS showing the Resonator/Expansion Chamber 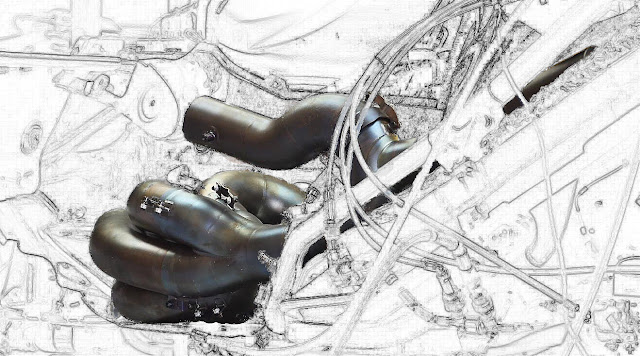 Above: The image adjusted to show the exhaust and the resonator chamber more clearly

Silverstone saw yet another twist in the application of Red Bull's exhaust package as they added a resonator chamber to the collector.  From the picture above trace the path the exhaust takes from the primaries toward the collector (single point where the 4 runners meet) you will see there are two pipes, the one that goes left is the exhaust outlet and the one that continues vertically is the resonator/expansion chamber.
Tied in with Red Bull Off Throttle blowing using a chamber like this could smooth the transition from On throttle to totally Off Throttle.

The usage of such a pipe is obviously not something that has been done in haste and will have been tuned to the exact requirements of the Renault engine. Due to the packaging required for the RB8 exhaust ramp exit the tuning length of the exhaust has been compromised, this would lead to a decline in performance during a set rev range. (This is not exclusive to just the RB8's packaging) The use of the resonance chamber allows both an airflow and sound shift further down the exhaust mimicking the effect of larger/longer exhaust runners.

Timing the Inlet and Exhaust events could also bore an advantage in terms of scavenging more airflow back into the engine cylinder giving a larger reaction during the engines power cycle. Technically you would leave the exhaust valve open for slightly longer than usual on overrun in order to recapture some of the air from the resonance chamber, this can be reused in the Intake and Compression strokes to give a larger power and exhuast stroke.

It is also plausible that the chamber offers further benefits in the shape of the Kadenacy Effect . The Kadenacy Effect is the sound wave created by combustion. As the air leaves the combustion chamber through the exhaust valve a sound wave is part of the airflow (positive wave) when it reaches its outlet a negative wave returns as the exhaust valve closes. Due to the resonance chamber the frequencies involved will be altered and help with the extraction of the gas that would normally be held in the exhaust awaiting the next engine cycle, extracting more airflow than an exhaust the same size but without the resonance chamber.

The effectiveness of a well tuned resonance chamber in combination with the now limited off throttle blowing will obviously have a larger effect on the Off Throttle effect than without the chamber.

Ferrari have already been using a Resonator / Expansion Chamber this season but I feel theirs is primarily focused at tuning the exhaust length rather than utilising the benefits that can be gained under off throttle events. 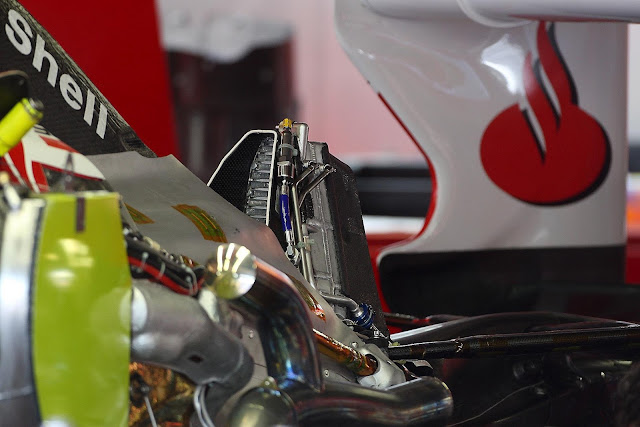