In terms of regulation change 2013 doesn't throw up too much drama for the teams but here's a quick look at what has changed (For the purpose of this, the part of the rule amended is highlighted in blue)

3.7.3 Forward of a point lying 450mm ahead of the front wheel centre line and less than 250mm from the car centre line and less than 125mm above the reference plane, only one single section may be contained within any longitudinal vertical cross section parallel to the car centre line.
Furthermore, with the exception of local changes of section where the bodywork defined in Article 3.7.2 attaches to this section, the profile, incidence and position of this section must conform to drawing 7. This section may not contain any closed channel the effect of which is to duct air directly or indirectly to or from the external air stream for any purpose other than data acquisition.

The above ruling is in place to stop the transportation of air internally (through tubing) to or from the nose to the bulkhead. This is to stop teams influencing the Front Wing by use of ducting be it DDRS or otherwise.

This article is in regard to the modesty panel that the teams will now be able to use in order to cover the step noses of 2012. The modesty panel is as close to a spec part as Formula One goes and means that no one team may glean an advantage by adopting the rules in a different context. 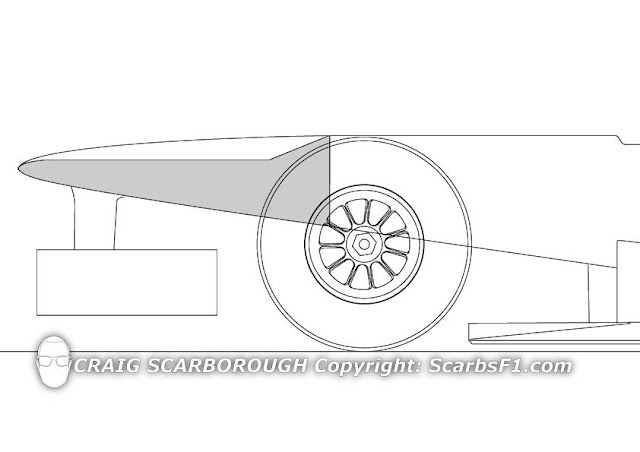 Above: Craig 'ScarbsF1' Scarborough's diagram above gives us an idea of what the Modesty Panel may look like

3.18.1 The incidence of the rearmost and uppermost closed section described in Article 3.10.2 may be varied whilst the car is in motion provided :

It cannot be used to change the geometry of any duct, either directly or indirectly, other than the change to the distance between adjacent sections permitted by Article 3.10.2.

This line is written in order to rule out the plunger affixed to the Mercedes WO3 Rear Wing Top Flap that exposes the ducting that allows Mercedes to use DDRS. The way in which this is written however I believe still leaves the door open for the Top Flap to expose ducting in the Rear Wing Endplates like the ones I showed McLaren may be using at the moment.

Above: Image mentioned in my article 'McLaren Low Downforce Rear Wing' showing how a duct to the endplate may be being exposed by the top flap moving under DRS

Interestingly the following two articles in regards to DRS are not present in the 2013 regulations of which I'm sure is just a mistake:

3.18.2 Subject to any special conditions relevant to a specific Event, details of which the FIA will provide to each competitor at least one week before the start of an Event, the adjustable bodywork may be activated by the driver at any time prior to the start of the race. In conditions of poor visibility however the race director may, at his absolute discretion, disable all such systems until conditions improve.
If the adjustable bodywork is disabled in this way at the start of any of the three periods of the qualifying practice session (Q1, Q2 or Q3) it will remain disabled for the remainder of the relevant period.

3.18.3 For the sole purpose of improving overtaking opportunities during the race the adjustable bodywork may be activated by the driver after he has completed two laps after the race start or following a safety car period.
The driver may only activate the adjustable bodywork in the race when he has been notified via the control electronics (see Article 8.2) that it is enabled. It will only be enabled if the driver is less than one second behind another at any of the pre-determined positions around each circuit. The system will be disabled by the control electronics the first time the driver uses the brakes after he has activated the system. In conditions of poor visibility however the race director may, at his absolute discretion, disable all such systems until conditions improve.
The FIA may, after consulting all competitors, adjust the above time proximity in order to ensure the stated purpose of the adjustable bodywork is met.

The one thing that bemuses me about the regulations is in regard to torque maps. The FIA went to great lengths in order to bring parity to all teams by allowing teams a 2% tolerance from one of their first 4 maps of the year. The new regulations haven't been altered in this department (Although the 2013 appendix aren't available yet and may cover this) and as such will the FIA do the same next year and allow the teams to run anything in the first 4 races then choose their tolerance map? If so I'd hazard a guess at some lairy torque maps being worked on for the first 4 races of next season.

The other important aspect as far as I'm concerned is that the FIA are yet to try and rule out the usage of DRD (Drag Reduction Device - http://www.somersf1.blogspot.co.uk/2012/09/lotus-mercedes-drd-drag-reduction.html)  This would require wholesale changes in the way the regulations read in and around the central portion of the Rear Wing which I think could be difficult for them to change.
Tagged
Newer Post Older Post