Gurney Trims, Tabs or Flaps and why they're important for the Diffuser in 2012

A Gurney flap is so named after Dan Gurney who first applied such a device to the trailing edge of the rear wings of his car's in the 70's. This was not a new concept however and has been used in flight applications since the early 1900's in order to make a wing create more lift to the deficit of more drag.

The Gurney is quite a blunt method of producing lift/downforce but can also help to rectify deficiencies in the wings design. It helps to trim the angle of attack of a wing thus allowing a higher angle of attack before separation occurs. In terms of flight, had a designer miscalculated the design profile of his wing adding a gurney may help to rectify the flight pattern, as such the same can be done with an F1 wing. The advantage of this in terms of motorsport is that you can continue to leverage more downforce from a wing by increasing the wings angle of attack, however by default this will create a larger proportion of drag. This is caused by the airflow on the rear of the wing being unable to sustain the same AoA and so separation occurs as the boundary layer increases at the trailing edge.

The FIA regulations mandate the height of a Gurney Flap be no more than 20mm on the Rear Wing's Top Flap but don't specify any further on how the flap be angled and indeed it's chord or design profile.

As we have seen during 2012 the teams are using Gurney's more and more with Front Wings being treated with them in order to create downforce in specific regions. It is however the area above the diffuser that see the teams utilising Gurney's the most this season with an array of different approaches.

With Exhaust Blown Diffusers having been outlawed for 2012 the teams are constantly looking for ways to further enhance the performance of their diffuser in order to extract more downforce and so this season have set about constructing more and more complex Gurney's.

The perforation allows for airflow to seep through from the high pressure side into the low pressure region helping to maintain the speed of airflow to the trailing edge so the flow doesn't separate. This creates a more  co-efficient balance of downforce vs drag creating a more stable flow structure from the diffuser. 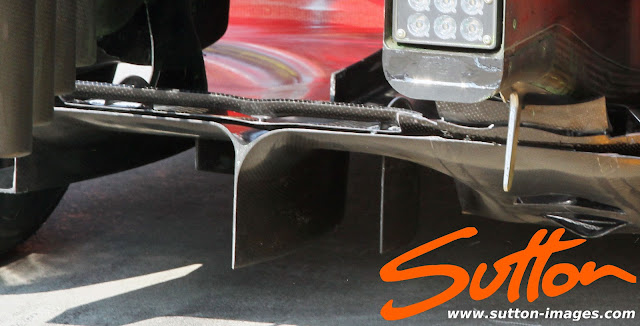 Above: Ferrari F2012 at Monza - Gurney above the Diffuser now has 2 tiers in order that more AoA can be run on both tiers 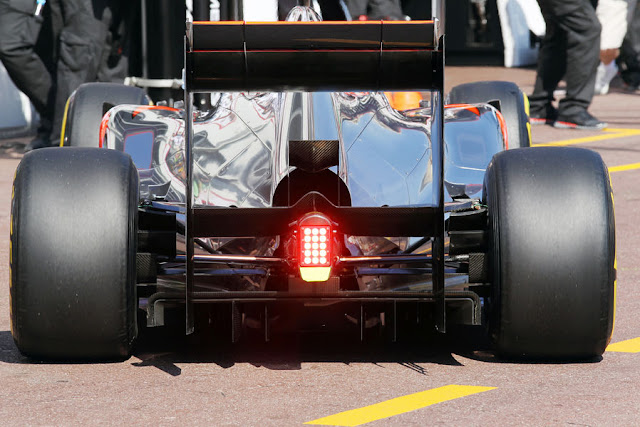 Above: McLaren's Monaco (and previous) specification Diffuser Gurney saw the perforation extend all the way around the periphery of the Diffuser 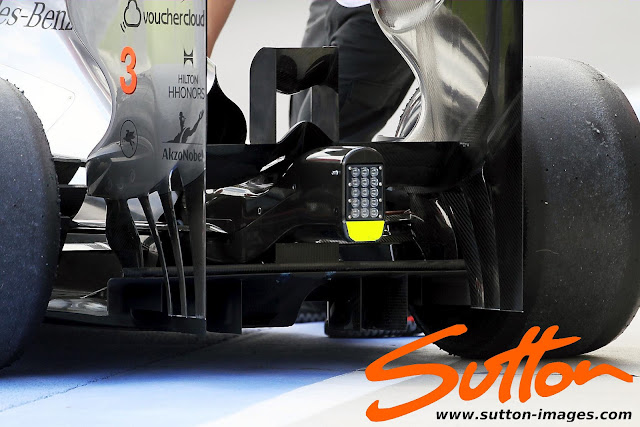 Above: For Silverstone and Hockenheim the team simply lopped off the edges of the Gurney stopping it a few inches short either end 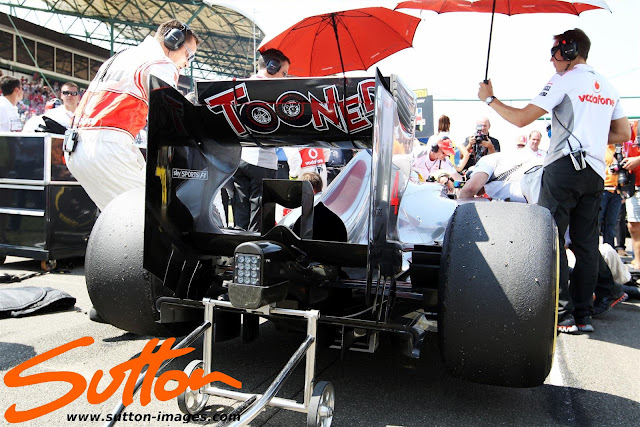 Above: Since Hungary McLaren have run a very similar design to both Ferrari and Red Bull with a fluted end that joins the edges of the diffuser 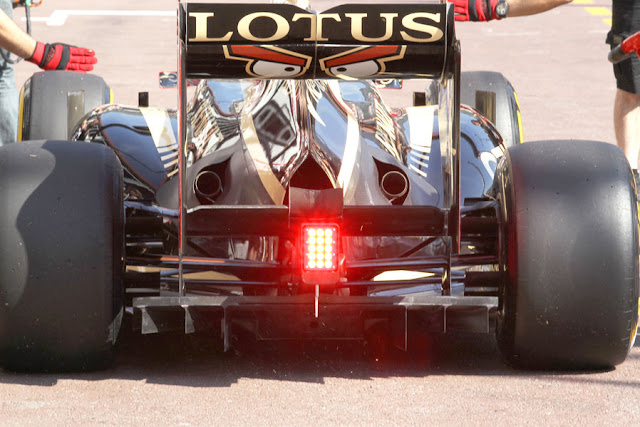 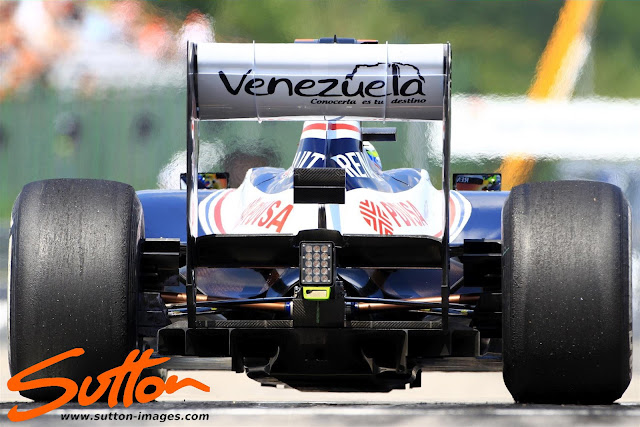 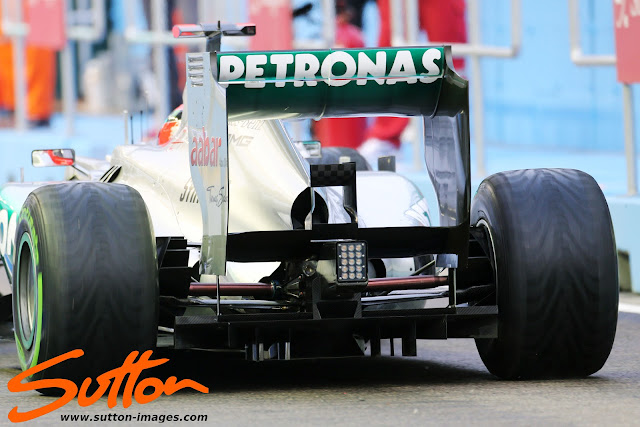 Above: As we can see from these 3 images Lotus, Williams & Mercedes all choose to run with a perforated central section to their Gurney.  Their approach helps in not only extracting raw downforce from the Diffuser but managing the effects of lateral tyre squirt on the diffuser channels 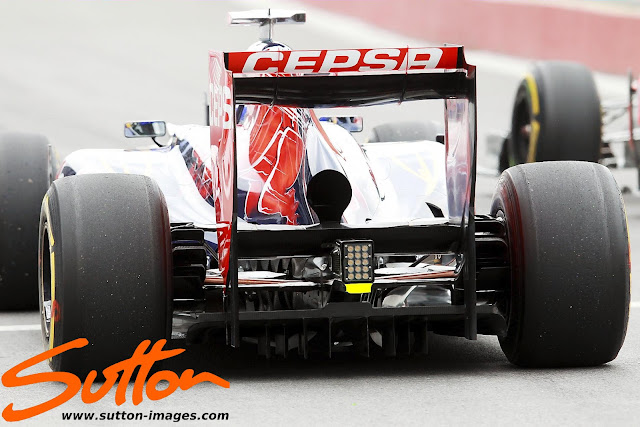 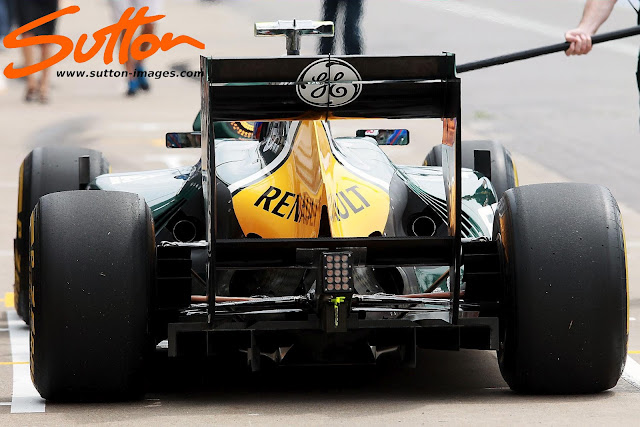 Above: Caterham & Toro Rosso showing that their use of Diffuser Gurneys can still be used as a blunt instrument with large vertical tabs

As shown by the leading teams this area is crucial in extracting additional performance now EBD has been banned and as the teams find further ways in which to manipulate the exhaust plume toward this area these Gurney Tabs, Trims or Flaps may become even more complex.
Tagged
Newer Post Older Post