Ferrari have been testing many Front Wings over the last few races so it was no surprise they arrived in India with yet another iteration. 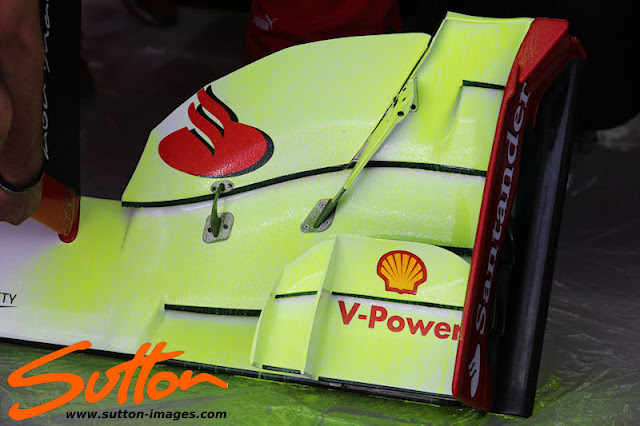 The main Wing differs only in small details from its predecessors but the Endplates offer an alternative arrangement for the holes. 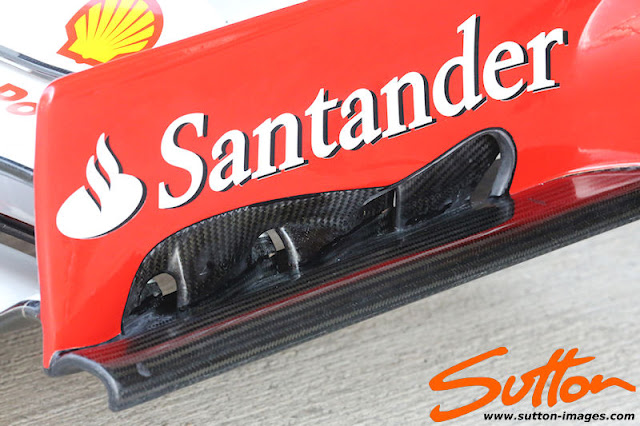 The team also arrived in India with a new diffuser arrangement featuring a section in the central portion that allows the starter holes airflow to exit higher up.  This is not revolutionary and a more aggressive version has featured on the Mercedes W03 for some time. 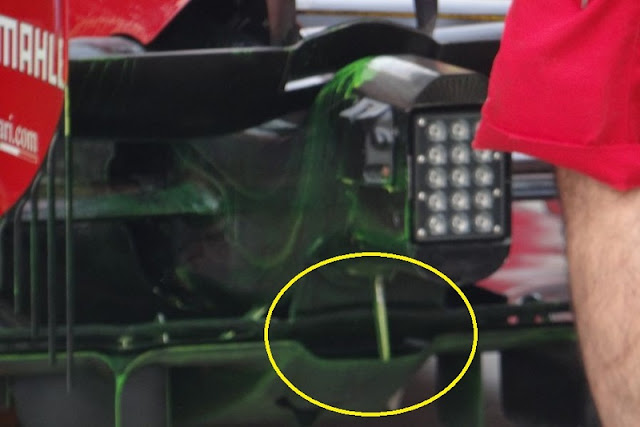 Alongside the Diffuser amendment it was presented with a new Gurney Flap.  The Gurney extends down around to the bottom edge of the Diffuser where as the old one stops short and had more of a bulbous section as it curved around the top edge.  (The new Diffuser Gurney is very similar to the one McLaren ran earlier in the season and have since switched to one very similar in design to the outgoing Ferrari one)  As we can see in the picture below they have still opted to use a 2 tier Gurney just as Red Bull are employing. 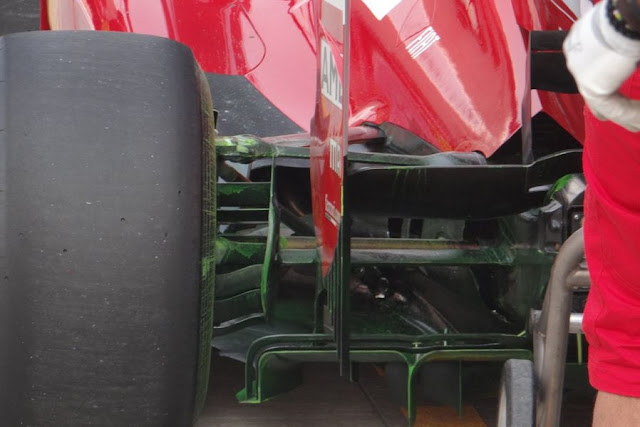 Above: New Diffuser Gurney extends around the whole of the Diffuser 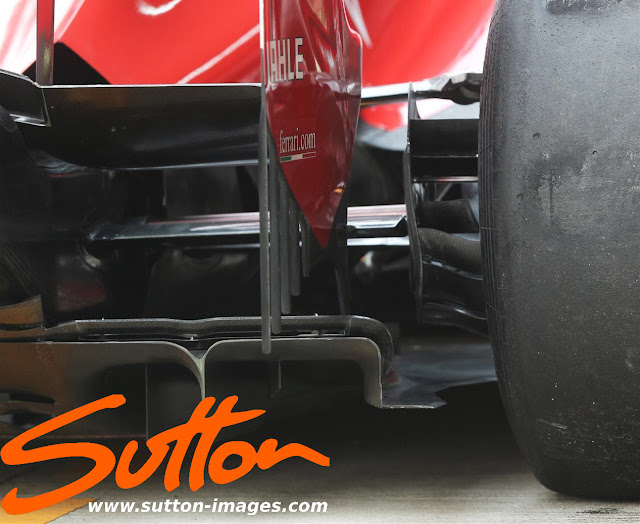 Above: Old Diffuser where the Gurney didn't come all the way around the edge

Both drivers did back to back tests with the Diffuser during the practice sessions but as only one was available at the circuit Fernando went on to race it.

An area where the team have stepped back is the cockpit fins, the team have been running for a number of races the foremost fin as part of the Mirror Stalk. In India the team reverted back to old fins under the mirrors. 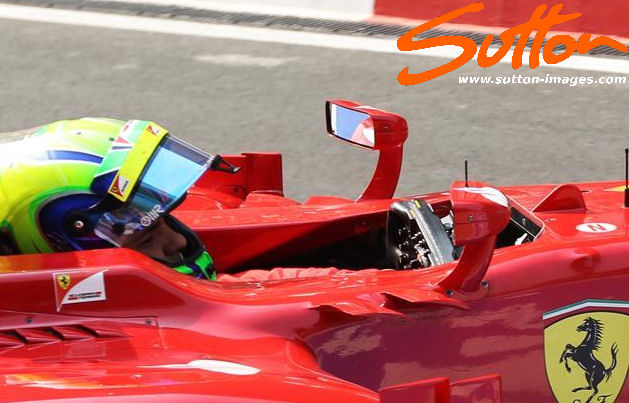 In India the team once again revised the cars but this time chose to run their drivers with a minor difference.
Mark ran with different Sidepod Airflow Conditioners, unlike the ones on Seb's car and that have been run all season these Conditioners connect to the Sidepod at a lower point whilst Seb's arch over creating an airflow frame much higher up the Sidepod. 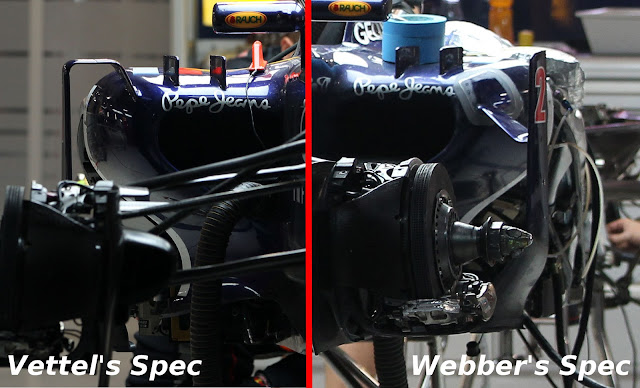 The Conditioner's on Seb's car are pretty much the same design used since the start of the season and so it's unsurprising the team would look to develop this area.

I looked back last week at Red Bull's update path over the last few races and chiefly the alterations made to the Front Wing and Nose. I also looked at how the team had revised the length of the Sidepod in order to extract more Exhaust/Aero performance: http://somersf1.blogspot.co.uk/2012/10/red-bull-recent-development-analysis.html

If we were to look back at my comments on the RB8 after Spa and Monza (http://finalsector.co.uk/tech-roundup-low-downforce-special-spa-monza/) we would see that I eluded to the Tunnel concept choking, as too much airflow overwhelmed the area's the Tunnel's were sending airflow to.

In the pictures below from Italy & India we can see the different ethos employed around the outside of the lower engine cover exit. 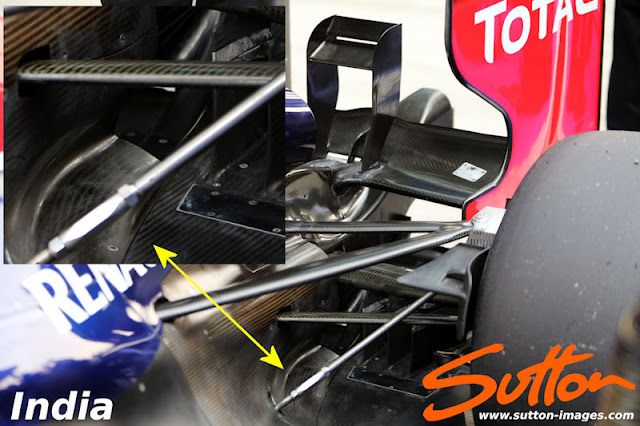 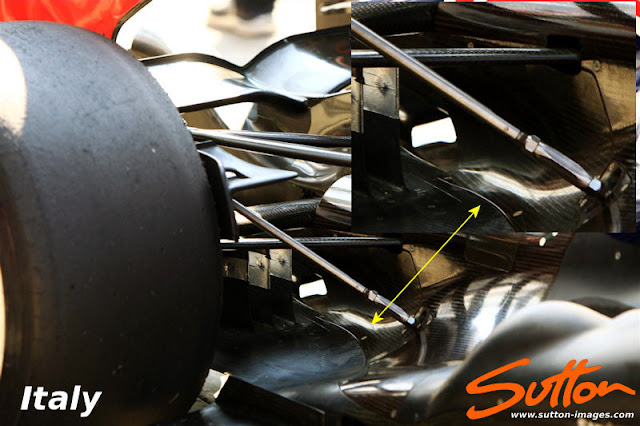 This airflow is received from the smaller more rearward Tunnel and was initially aimed squarely at the Starter Motor Hole (SMH) With the Starter Motor Hole being overwhelmed by airflow the airflow was causing the SMH to stall affecting the diffuser's performance, meanwhile the airflow that couldn't penetrate the SMH tumbled off causing a more widespread diffuser inefficiency. 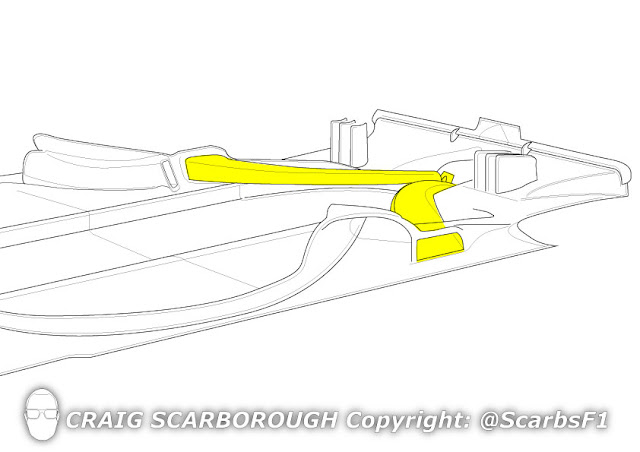 Above: Great Illustration of the Red Bull Cross-Under Tunnel by Craig Scarborough the full article pertaining to this diagram can be found here: ScarbsF1 - Red Bull Ducted Sidepod & Blown SMH

With a wider reaching outlet now in employment it allows the SMH to receive airflow but as the floor is scalloped out around the sides of the SMH and Crash Structure a much more laminer and constructed flow pattern emerges which isn't degraded or overwhelmed by an exponential increase in speed. This allows the Exhaust plume to flow between the Driveshaft Cowl / Floor Strakes unimpeded by an erant flow structure leading to an increase in downforce and better overall balance.

As always it must be pointed out that Red Bull are still the only team to have employed the Driveshaft Cowling / Floor Strakes in 2012 in an attempt to control the airflow in this region. Although the team have made many revisions to the design of their Exhaust solution during 2012 this feature has remained constant and plays a large part in the efficiency of Exhaust Plume control for Red Bull.

In this last shot we can see that the team also painted flo-viz around the Exhaust Ramp/Engine cover at some point throughout the weekend. This was probably to assess the effect of the New Vertical Floor Strake position we can see being used in the picture below. The Strake reaches in more towards the ramp aligning with the outer part of the exhaust channel acting as a Vortex Generator at the edge of the floor further helping to 'Seal' the edge of the diffuser. The previous Strake was perpendicular to the outer rear edge of the floor. 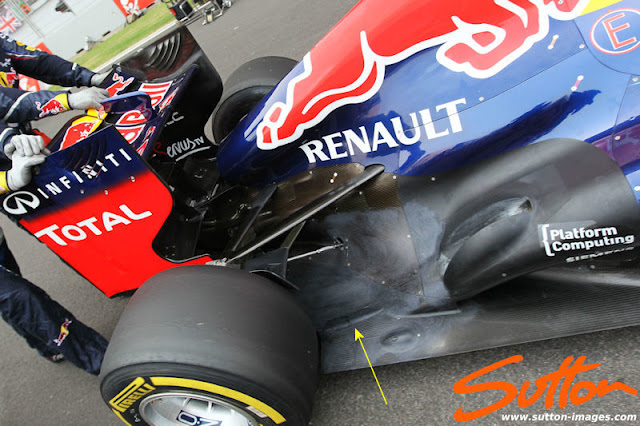