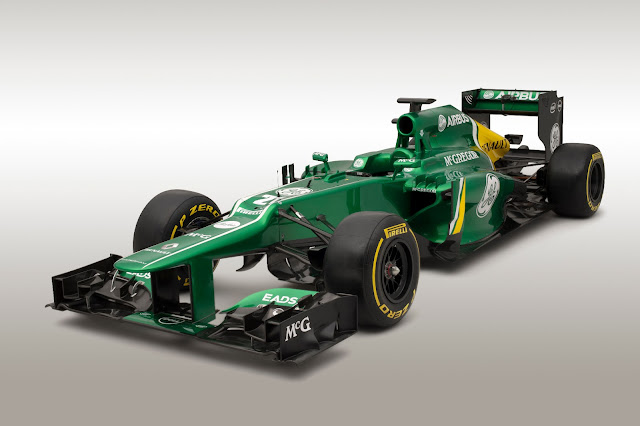 You may be confused in thinking that the newest Caterham should be designated CT-02, well that designation has been handed over to the newest road car instead.  Caterham have lead the way in terms of the new teams since the 3 entered in 2010, however snapping at their heals at the tail end of 2012 were Marussia who without KERS made some strides taking the battle for 10th down to the last race at Interlagos.

Like Marussia the team have opted for evolution over revolution as demand on every department will be stretched during 2013 with the inception of the new rules coming in 2014.  It's likely we will see little development from the 2 tail end teams this year as even the more established teams will have to battle with resources to provide a good car in 2014.

A new paint job on the CT-03 has lightened the entire car and somehow seems more aesthetically pleasing, meanwhile the car will be piloted by 2 new drivers: Charles Pic & Giedo Van Der Garde in what most perceive as a shift toward the team taking pay drivers over talent.  Charles joins the team from their closest rival Marussia who impressed in his first year in F1 for me and was an obvious alignment with Caterham for me with their fresh relationship with Renault taking hold.  As we know Caterham are working with Renault as part of an alliance to develop road cars and as Pic is part of Renaults development programme the switch made sense for both parties.  Of course allied to this Renault will undoubtedly be providing Caterham with some economic benefits most likely in the form of a free or heavily reduced rate engine supply.  The team continue their association with Red Bull Technology too utilising their gearbox. 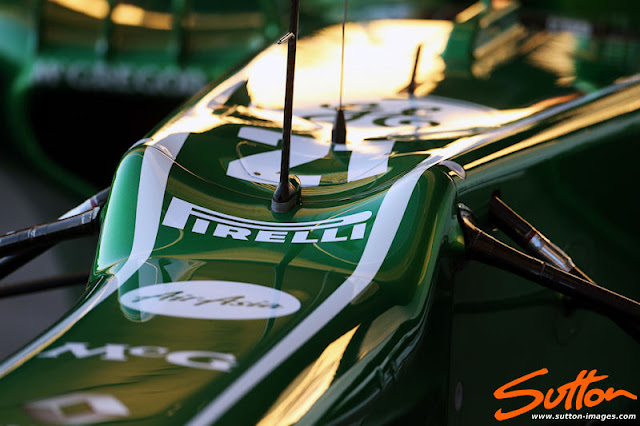 The team were the first to break cover in 2012 causing the start of the controversy over what most deemed as the ugly step noses.  The flat approach of their nose earnt it the Platypus nickname but unpurturbed the team have continued with this for 2013.  Their approach makes sense, as a team with less resources producing a new arrangement or using a vanity panel would require more CFD & Wind Tunnel work to be carried out on what essentially is a minor aerodynamic gain/loss ratio. 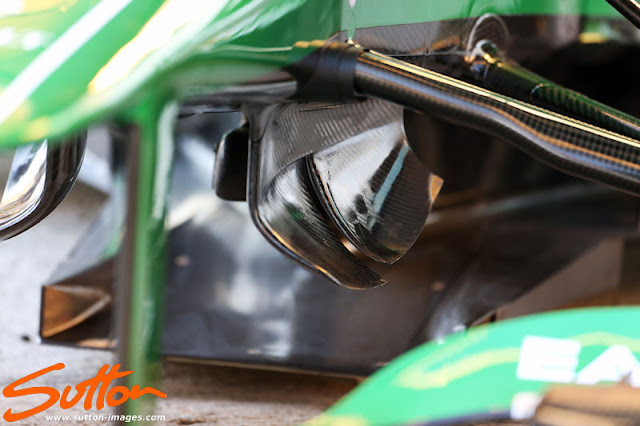 Under the nose the car is treated to a set of turning vanes with the same design ethos employed by Red Bull and Ferrari.  This is a key area with the raised nose profile as it effects how the additional air is distributed to the Sidepods 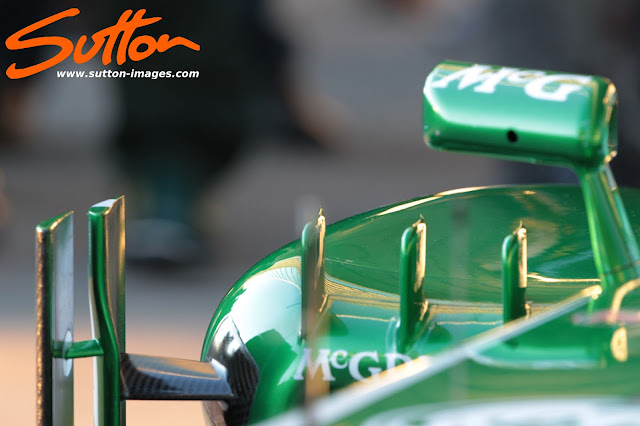 The Sidepod layout has been treated to a revision with an altered Inlet profile allowing for a more aggressive undercut.  Meanwhile on top of the Sidepod the team have applied 3 Vortex Generators in place of the 2 that the CT-01 used toward the tail end of 2012.  The team also continue to use a twin element airflow conditioner to the side of the Sidepod but have undoubtedly changed the profile of the element in order to change the flow characteristics around the altered Sidepod undercut. 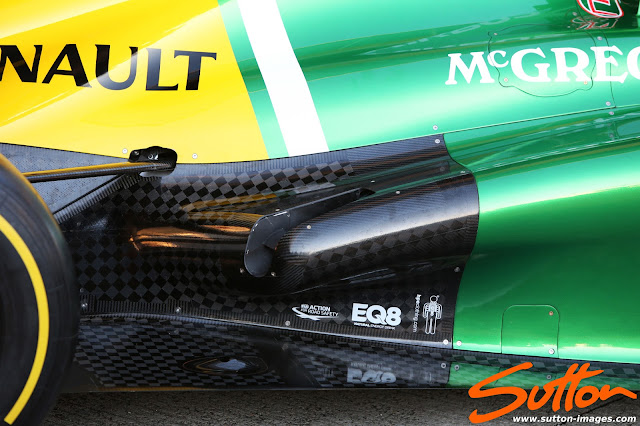 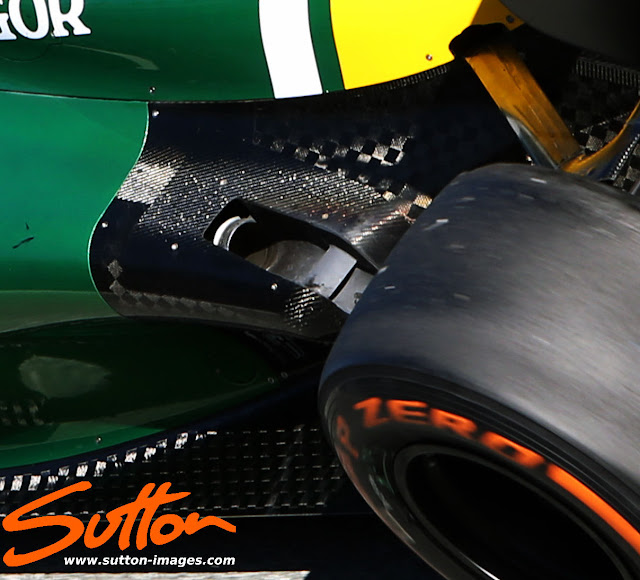 The Sidepods themselves have been re-profiled to cater for the change the team made mid 2012 season to a Semi-Coanda exhaust layout. Previously the team had adopted a downwash configuration and so the Sidepod was much wider than the CT-03's.
The team have also added a blade section at the tail end of the exhaust channel, many are questioning it's legality but as the blade sits below the tailpipes common axis I'd doubt it is.  If the exhaust channel were to be at the same horizontal angle as the exhausts exit then I'd consider it illegal but Caterham's Semi- Coanda channel is pitched down.  I have been asked about re-ingestion of airflow too but the rules don't cover this explicitly and instead require that bodywork not have a right circular truncated cone ahead of the rear wheel centre line.


5.8.4 Once the exhaust tailpipes, the bodywork required by Article 3.8.4 and any apertures permitted by Article 3.8.5 have been fully defined there must be no bodywork lying within a right circular truncated cone which :
a) Shares a common axis with that of the last 100mm of the tailpipe.
b) Has a forward diameter equal to that of each exhaust exit.
c) Starts at the exit of the tailpipe and extends rearwards as far as the rear wheel centre line.
d) Has a half-cone angle of 3° such that the cone has its larger diameter at the rear wheel centre line.
Furthermore, there must be a view from above, the side, or any intermediate angle perpendicular to the car centre line, from which the truncated cone is not obscured by any bodywork lying more than 50mm forward of the rear wheel centre line. 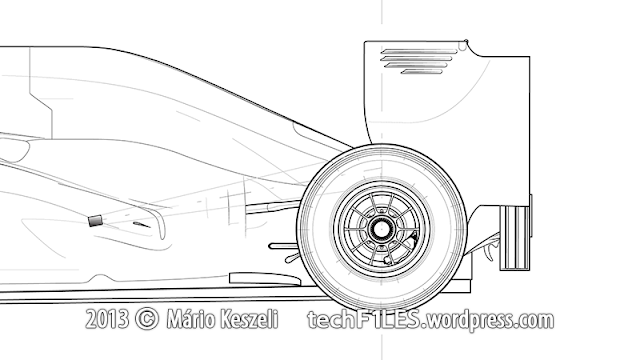 Above: Fellow Tech analyst Mario Keszeli has quickly mocked up the sketch above to show the exhaust channel, the area at which the exhaust is pointed and the blade inside the channel.  The exhaust plume will of course follow a different projection than the cone section referred to visually and in the regulations and is the point at which the blade becomes relevant.

We have to wait to see if any of the teams object to the teams use of the blade or simply assess their own versions afterall it's not a complicated piece of bodywork and so is easier to copy than dispute. 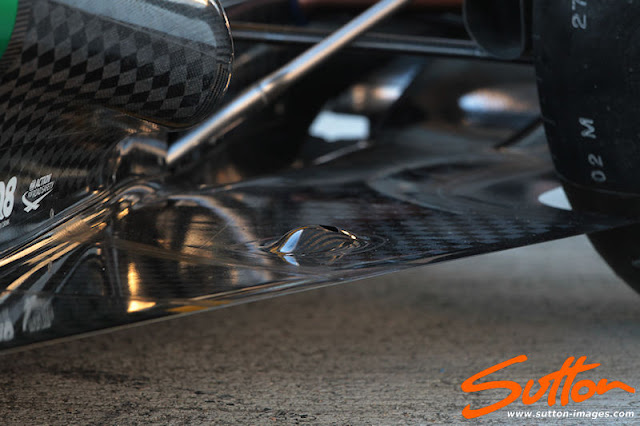 At the rear of the car the team continue to run with exposed halfshafts although most of the top end of the field appear to have converged on the Red Bull shrouded option.  The floor ahead of the rear tyres remains free of vertical strakes and/or tyre squirt slots. 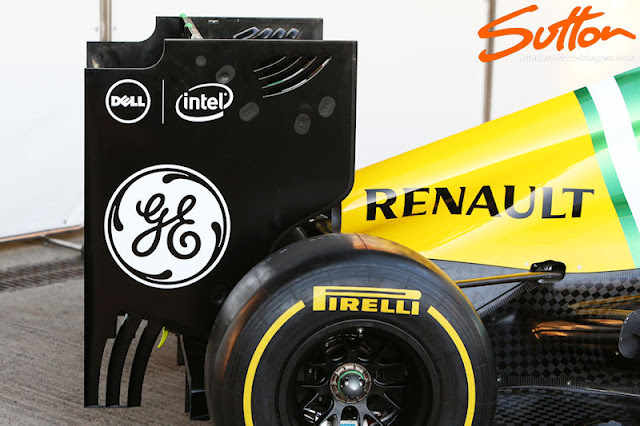 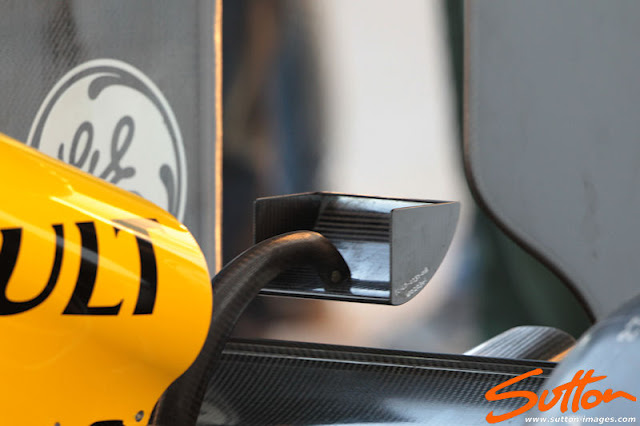 The team carry over some of the elements they produced in their mid/late season upgrade packages for the CT-03 including Rear Wing Endplate Strakes and their Monkey Seat which extends from a Swan Neck mounted on top of the Gearbox enabling a clean flow to the Beam Wing.
Tagged
Newer Post Older Post