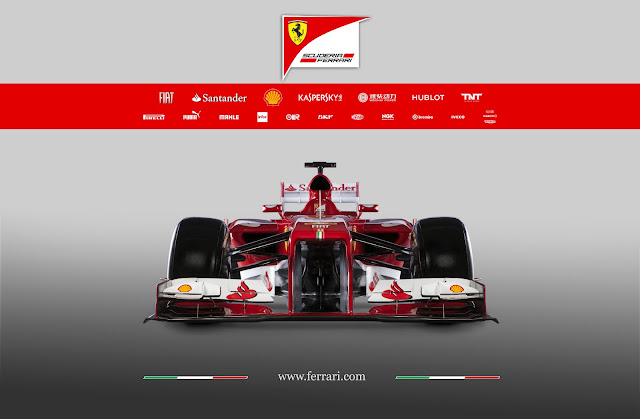 Ferrari announced earlier in the week their 2013 challenger would be designated F138 (13 for the year and 8 denoting the last year F1 uses the V8 engine configuration)
Its been well documented that Ferrari's problems last season were compounded by correlation issues with their Wind Tunnel. The team realizing this have set about updating their facilities in Maranello and shifted design focus for this challenger during last season to the Toyota facility in Cologne.

The F2012 had been muted to be an aggressive design leading upto it's launch last year. The car featured a step nose much to the annoyance of many of their fans but more importantly at the front of the car pull rod suspension.
It became apparent early on that Ferrari had made some design decisions that may impinge on their performance. The Sidepod layout featured a return to upright radiators meanwhile their exit at the rear of the car exited in combination with the exhaust plume. Ferrari's solution was trying to pull the airflow through the Sidepod and create more flow over the rear of the floor.  The team swiftly set about changing their exhaust position running many different versions of their Acer duct before settling on a more McLaren inspired external exhaust.

Alonso's championship assault was mirrored by Ferrari who were aggressive in their application of upgrades. These didn't always and get raced as they continued to struggle with scale and CFD correlation with quite a few front wing designs falling on the scrap pile.

The F138 launch images perhaps show the closest car to what the a team will test with so far, plenty of detail changes when compared to the F2013.  Starting with the Front Wing the top flap's inner section has been split into two sections much like other teams started adopting last season.  This increases the co-efficiency of the section whilst also setting up the airflow aft of the wing better.  As per 2012 the team continue to have a stacked wing effect at the outer portion creating 6 elements 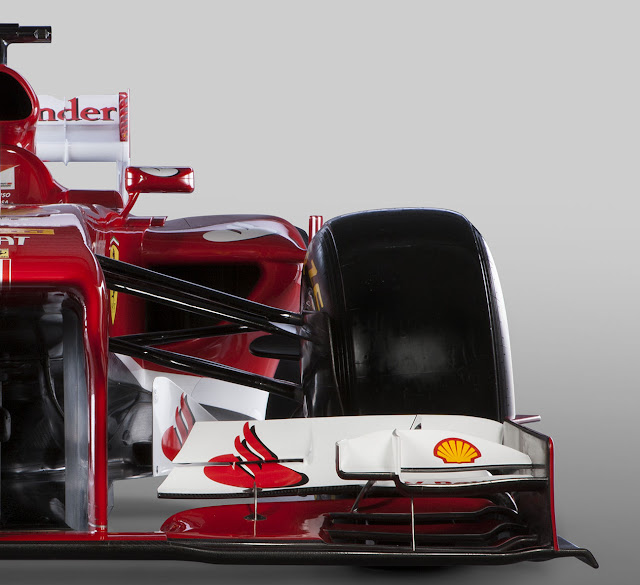 In side view we can see the Endplates complete the same structure as the F2012 helping to maximise the 6 tiers working on the Wing elements inside of them.  The nose just like McLaren takes the height rules to it's limits allowing more air to be driven under the car.  Utilising the vanity cover allows the nose tip to be placed even higher allowing more clearance underneath, with the nose tip so high the team have decided to offset the Wing Pylons by graduating them rearwards meaning the frontal area is maximised and the pylons themselves extended further back to aid in controlling the air further downstream. 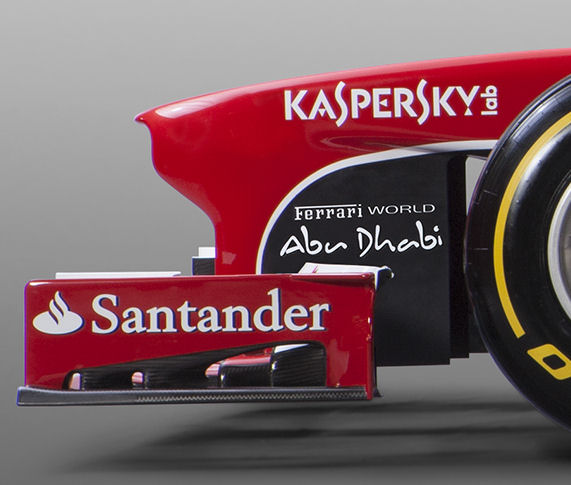 The image below shows how high / flat the nose meanwhile the team show their under nose turning vanes to be similar to last years.  The Pull Rod Front Suspension used by the team in 2012 has been re-designed in order to make working on the car easier for the mechanics. 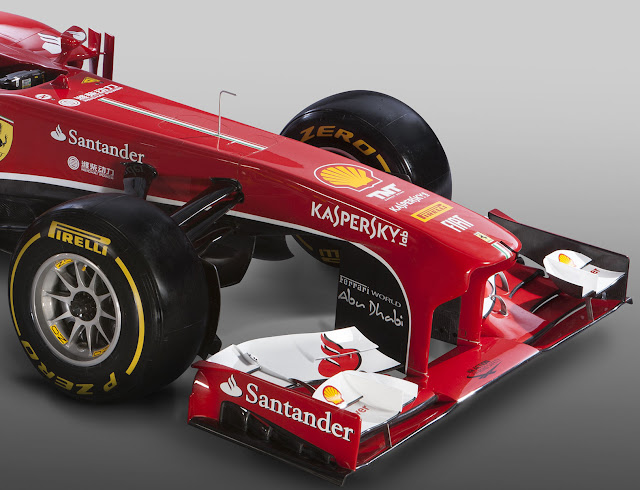 Moving down the car to the Sidepods and the 2012 ethos appears to have carried across to the F138, without the bodywork off I obviously can't confirm it but it would appear that the team have stuck with their vertically mounted radiator layout rather than returning to the slanted layout (Signaled by the abrupt bodywork curves in that area). The Inlet remains relatively unchanged as do the Vortex Generating fins next the to the cockpit entry and the twisted twin element Sidepod Airflow Conditioners.  The bargeboard features a less aggressive design with the serrated edges missing at present.  The roll hoop remains unchanged in design as does the duct behind. 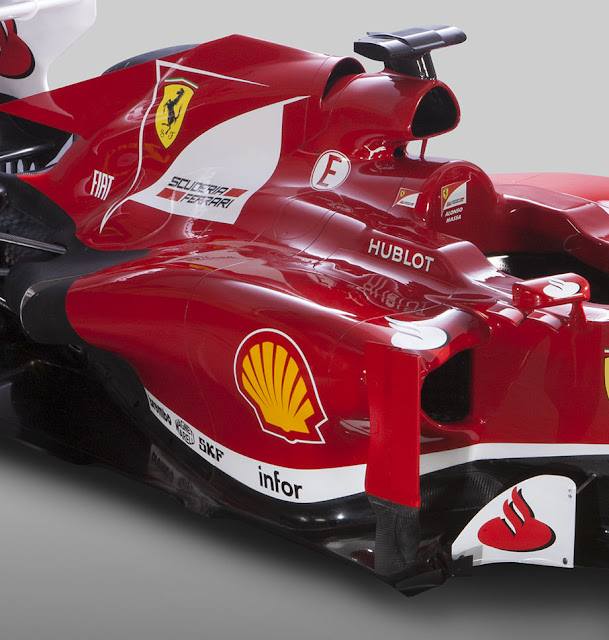 At the rear of the car the launch images show the F138 sporting the semi-coanda exhaust just as they did through the 2012 campaign.  Ferrari like McLaren and Force India have also adopted the integration of the halfshaft into the lower wishbone as I talked about alot (sorry) last season as a concept Adrian Newey's lineage of cars from the RB5 have used.  This allows the wishbone to be placed higher whilst also removing the aerodynamic effect the halfshafts rotation has on the exhaust plume.  Like Red Bull it would seem that Ferrari have also placed a couple of vertical strakes underneath the wishbone in order direct the plume over the diffuser.  It would appear that Ferrari have also taken the opportunity to lengthen the gearbox area to further take advantage of the exhaust plume manipulation in the coke bottle region.
The team have retained their outer floor slots just in front of the rear tyres but I suspect as the team extract more performance from the exhaust and enable airflow to seal the floor between the tyre and floors edge these will become redundant.  Further modifications have been made to the rear brake ducts with holes cut into the top edge increasing it's efficiency.

Lastly and perhaps most radically are the Rear Wing Endplates which feature slats at their rear, I will look into these further to assess their true purpose but just like the strakes we see adorn the bottom of the endplates on most cars these slats will manipulate the airflow ahead of them.  My initial thoughts lead me to believe they are using these in order to enhance the diffusers effect. 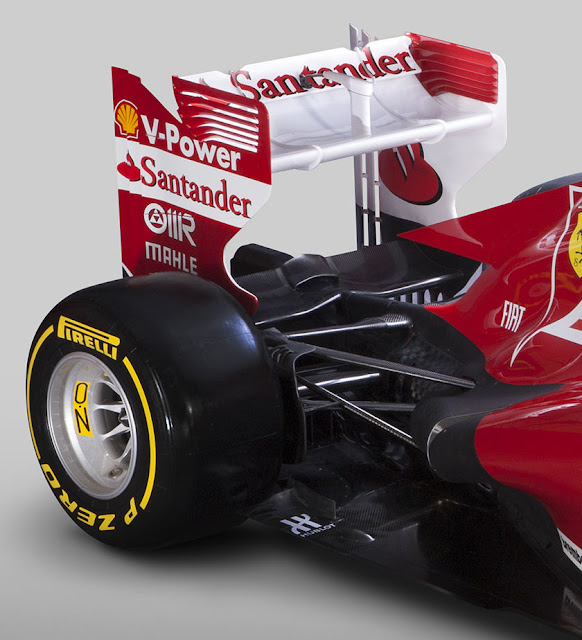 The lack of cooling at the rear of the car clearly signals this isn't the complete story from Ferrari and just like their rivals I suspect they will test with a different exhaust design.
Tagged
Newer Post Older Post