Criticism leveled at Pirelli in Malaysia, is it justified? 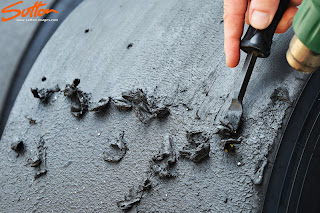 Lets cast our minds back to the start of the 2012 season and the comments from the teams and drivers regarding the Pirelli tyres. Lets say they were critical at best but by mid season the teams got on top of their issues with them and adapted, resulting in less pit stops and inevitably less moaning.

Pirelli's remit from the FIA is simple, create tyres that challenge the teams, thus creating more pit stops, varying strategies, more overtaking and in turn more for the viewer to absorb. The teams lobby on one hand for a better 'show' (for their fans) but in reality would love a more controlled tyre as it lessens the challenge the team faces.

For 2013 Pirelli took on board some of the criticism the teams leveled at them in regard to the way the front tyres wore in 2012 and redesigned the construction of the 2013 tyre. The tyre is now more forgiving in the sidewalls whilst the central platform of the tyre has been made more rigid. The net result is a slight increase in the weight of each tyre (Increase in the minimum car weight within the Technical Regulations to compensate) whilst affording the driver a much larger contact patch due to the construction changes. With the compounds all being moved down a tier and a new Super Soft entering the fray the degradation levels have also increased.

Red Bull have voiced their displeasure in Malaysia at the situation claiming it is unfair that the teams with more downforce seem to be at a disadvantage, Sebastian Vettel even went as far as to say:

"Today I think tyre wear was pretty severe for everyone. You end up going round way under the car so it's not a lot of fun but that's how it is, it's the same for everyone. We need to try a couple of things to make it better; we tried today, now obviously it's up to us to hopefully learn the right lesson and make a step forward."

Whilst Team Principle Christian Horner had this to say:

"I think what we want to avoid is drivers cruising around under the performance of their car, unable to follow another car closely, otherwise it's not racing. But it's still early days so let's see a sample of two or three races and then be able to gauge from there."

Both are making the assertion that the team have more downforce (either than their competitors or than last years car) and that by virtue of this tyre wear increases. I have to say that surely this is logical anyway? A car with more downforce asserts more force onto the tyres, heating them more rapidly and therefore wearing them more quickly. I can see the other side of the coin in that if you have less downforce you should slide around more thus wearing the tyre, however with the enlarged contact patch it would seem that you simply add more energy / heat to a larger surface area. Without the rigid central platform on the tyre it would deform and quite rightly a sliding car would generate excessive heat and therefore excessive wear.

If we were to watch a lap onboard the Lotus it's clear to see that the team have found a way in which to assert the necessary force whilst cornering, however it would appear they are utilising the full contact patch therefore dissipating the heat across the whole width of the tyre. In comparison Red Bull seemingly have a very peaky window where they are operating the tyres, wearing this section of tyre more aggressively by virtue of thermal degradation. They are not the only team and if you watch the onboard footage of the cars, during cornering you will see the band of rubber pushed across the tyre as it heats up and then gets spit off the side of the tyre.

The other area of note in regard to the Pirelli's bought up this weekend is the use of the Renault R30 as Pirelli's development mule. It's something that I mentioned when Pirelli first announced they had acquired the chassis from Lotus and that is that Lotus will have a certain level of data available to them from the R30 that other teams argue is now giving them an advantage. I can see both sides of this argument as quite rightly Lotus do have a reference data to look at in regards to the R30, however I'd argue that firstly the R30 wasn't the best Enstone car and secondly they can have all the data they like from the R30 but that doesn't equate to the same tyre model as the 2013 tyres.

The E21 is clearly an evolution of the E20 and as we all saw in 2012 Lotus were capable of great tyre management, with a greater window for tyre performance the E21 has simply shown more of this potential. This of course is allied to the team using the 'Coanda' exhaust the season and achieving a downforce gain further enhancing the platform of the car.

So, storm in a tea cup? Yes, I think so, the teams have to adapt just as they do to any other variable that is presented to them in F1, for arguments sake the loss of unlimited DRS in qualifying this year.
Just like last year the tyre debate will rumble on until around round 8 at which point the likes of Red Bull will realise they have to give up some of the camber, low tyre pressures and/or ride height etc that was giving them an advantage in 2012 and found a better solution thereby allowing them to run 1 less stop like Lotus etc are doing already.  There is always more than one way to skin a cat and at the moment some teams don't like the fact others are doing it in a way they can't.

As an aside, whilst others have been critical of Pirelli I find their approach to suit F1 as they are helping to push the boundaries of the sport, teams and drivers. With conversation constantly dominated in the media at the moment about their product they are resolute in their approach as I think they should be. Lest we forget when we had Michelin and Bridgestone battling it out the tyres were prototypes each race, so that they could one up each other for the most exposure.