My initial intention behind my modern interpretation of the McLaren MP4/4 was to mark the 25th Anniversary of perhaps the most revolutionary machine to grace F1. 2013 however also marks the 50th Anniversary since McLaren's inception and so the team were keen to showcase their most famous car at the MP4/28's launch:

Before I embark on the unenviable task of trying to re-design a masterpiece perhaps we should look at the original MP4/4 in the way I look at contemporary F1 cars: The MP4/4 was designed and engineered by Gordon Murray and Steve Nichols and to most will simply been seen as an evolution of John Barnard's original design. The 4/4 however was more than just repackaging and redefining the concept. Several key design and installation decisions would ultimately decide the 4/4's layout with Murray's low line aerodynamic vision being complemented by them. 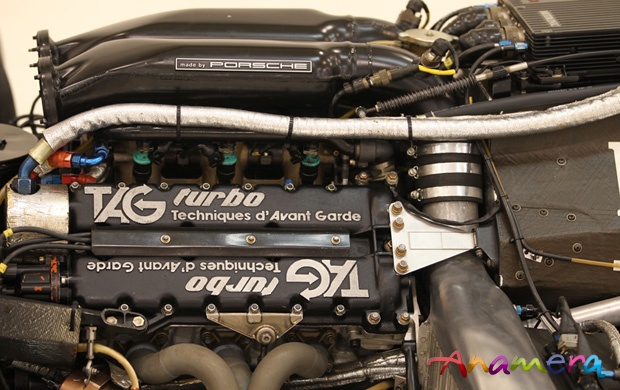 In 1987 the MP4/3 had used the TAG labeled Porsche V6 twin turbo that had been used by the team going as far back as 1983 in the MP4/1. The Porsche engine providing power for Constructors Championships in 1984 & 1985 whilst drivers took titles in 1984, 1985 & 1986. Williams rose to the top in 1987 using the Honda power unit which also powered the Lotus of rising star Ayrton Senna. In a move that would see the continued pairing of the Brazilian and Honda, the Japanese manufacturer moved their engine supply to McLaren where the starlet would also move for 1988. 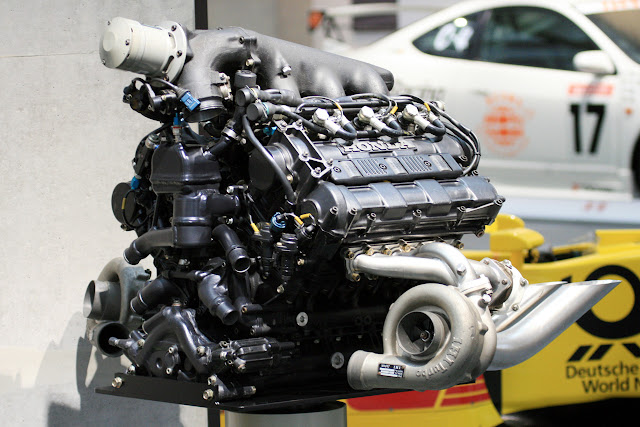 1988 was to be the last year for turbocharged engines in F1 with the FIA moving the formula back to Naturally Aspirated (N/A) engines in 1989. This lead to most of the field using N/A engines for 1988 in a precursor to the 1989 regulation change. Honda however continued to supply their V6 1.5 Litre Twin Turbo to both McLaren and Lotus even though the FIA had restricted it further by lowering boost pressure to 2.5 Bar (previously run at 4.0 Bar). They also reduced the allowable fuel tank size from 195kg's to 150kg's resulting in the need for greater fuel economy. The advantage of the Honda engine over it's Porsche predecessor was not just a power one with the Honda engine featuring a 80o layout as opposed to the Porsches 90o both lowering the CoG and the overall installation height.

The Honda powering the MP4/4 was the most powerful on the grid even with the 2.5 bar boost restriction, in qualifying trim the car produced in the region of 1000bhp. A ferocious amount of power tamed by the arguably the best 2 drivers: Alain Prost and Ayrton Senna. 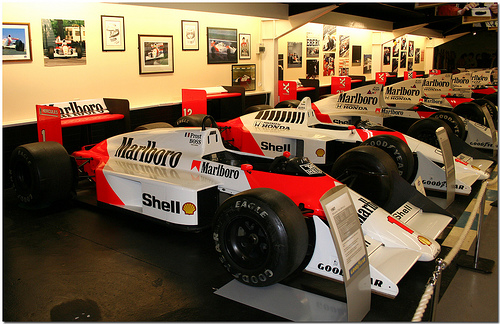 The reduction in fuel tank size also meant that the team would be able to reduce the size of the tank in the MP4/4. Murray was already renown for taking advantage of fuel tank design with his innovative Brabham BT42 which offset the design of the fuel tanks with the cars V8 configuration also lowering the car's CoG. Just like the Brabham days the opportunity arose to alter the dimensional properties of the fuel tank to a lower and slimmer variant.
The use of Honda's V6 80o powerplant meant that the hump in the bodywork that once resided aft of the drivers shoulders could be slimmed lowering the CoG and enhancing Murray's low line ethos. Of course the tanks design didn't stop here and seizing on the Engines lower height McLaren's design team also saw the opportunity to lower the driving position. As we can see above in a side by side comparison of the MP4/3 (left) and MP4/4 (right) the angle of the drivers backrest has been sloped more, not only allowing for the driver to sit lower in the cockpit but also allow for the fuel tank to be extended longitudinally at the base of the cockpit. 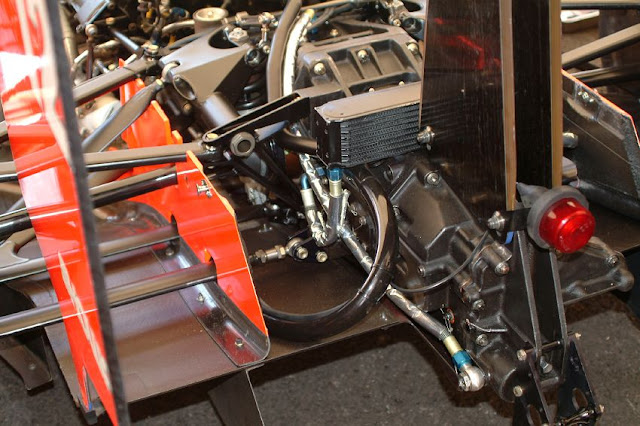 The car's gearbox was a collaboration with Weismann featuring 6 speeds the manual gearbox altered the characteristics of the car. It's predecessors had featured 5 speed offerings in collaboration with Getrag (MP4/3) and Hewland (MP41&2). Murray already had a great relationship with Pete Weismann from the Brabham days and so simply transferred this to the McLaren stable. Weismann wanted to build McLaren a Transverse gearbox but they settled on a 3 shaft longitudinal transaxle gearbox instead for 1988, taking the transverse in 1989 instead. The MP4/4's transaxle gearbox was designed with the Tilton clutch in mind who had manufactured a smaller diameter clutch for Lotus Honda in 1987.

Having spoken to Tilton they have confirmed that Honda had asked Tilton to design a more compact and durable clutch for the Lotus. Tilton duly obliged providing a 5.5” diameter carbon/carbon clutch, the first to be used in F1 winning a race at the hands of Ayrton's 99T in Detroit. Tilton's clutch was a revelation not only due to the size of the unit (as most teams still struggled with 7.25” diameter clutches) but the carbon/carbon design allowed for superior heat management, low inertia, high torque capacity along with a smoother engagement. All of this leads to an extended lifespan on not only the clutch but any associated parts. The clutch also represented a performance advantage in terms of power distribution as it was able to cope with the torque demands of Honda's V6 Twin Turbo engine especially important in qualifying trim. 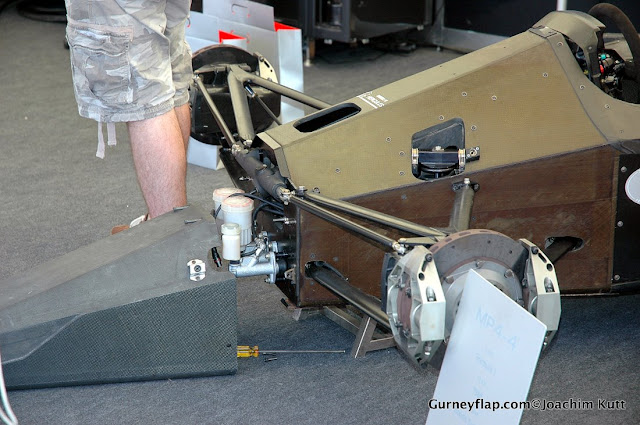 Suspension was taken care of by a talking point of 2012/2013; Pull Rod Front Suspension. It's usage in modern F1 raises an eyebrow as it requires much more attention to packaging and geometry whereas the MP4/4's low line approach would welcome the lower arrangement for both packaging and CoG purposes. Meanwhile the rear suspension was taken care of by push rods, rocker actuated coil springs and dampers. 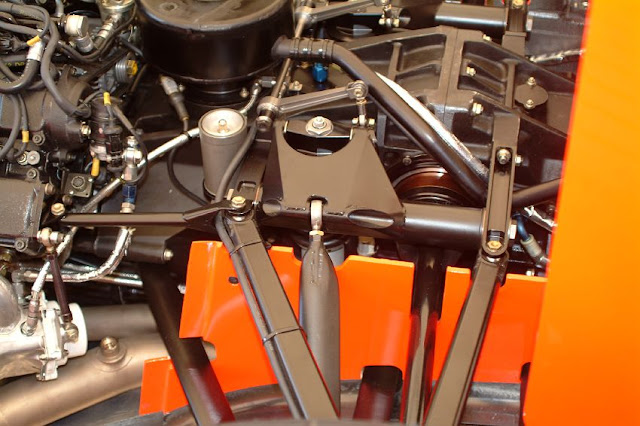 The suspension is an area that is probably most departed from it's modern counterparts and relies on a more inbound road car style setup with vertical strut/damper/spring combo's. The packaging in modern F1 cars still holds some similarities but with torsion bars affording a more compact way of applying control over springs they have become commonplace. 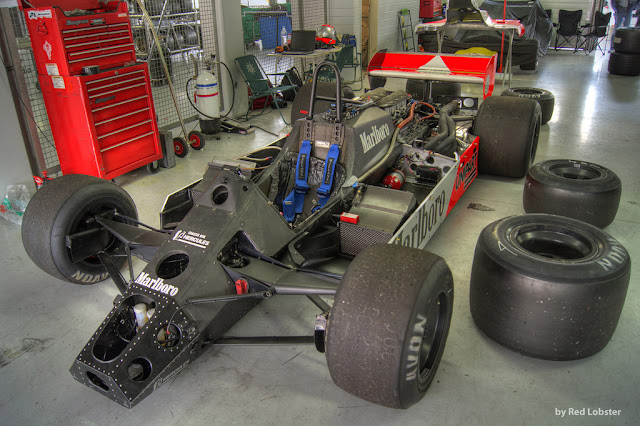 McLaren revolutionized F1 in 1981 when the John Barnard penned MP4/1 utilised a carbon fibre monocoque. Carbon Fibre was still a dark art at the time and even McLaren struggled to find UK based suppliers willing to supply them citing it too ambitious as a project. Barnard turned to the US and found a supplier in Hercules Aerospace who constructed the monocoque. F1 itself was full of skeptics but the application of a carbon fibre monocoque soon became a trend throughout the field as teams realised it's use yielded increased rigidity and saved weight.

The MP4/4 and Carbon Fibre Monocoques now featured in all F1 designs but McLaren still held the lead having been the first to the party. When comparing chassis for the 1988 season the Lotus 100T who were also powered by Honda should have been it's closest counterpart. It seems however that is where the comparisons stopped with the 100T being substantially less rigid, Jackie Stewart reportedly drove the 100T at Snetterton during the 88 season and like Piquet, Nakajima and Donnelly condemned the chassis as being unable to withstand the power delivery of the Honda power plant. His critisism didn't stop there though with the ergonomic layout and general cramped cockpit arrangement also coming under fire. Another element that perhaps stood the 100T at arms length to the MP4/4 was Lotus' continued use of 'Active Suspension', many think of Williams and the FW14B when the topic of 'Active Suspension' is raised but Lotus really pioneered it's use and adopted it for both the 99T and 100T with the latter failing to utilise it without Senna at the wheel.
This great video featuring Chris Economaki explains the Lotus 99T/100T's 'Active Suspension':

When we compare the 4/4 with modern F1 cars the car seems to lack in the aerodynamics department but don't be fooled at a time when engines weren't homoglated and performance could be found in that area, so too the design teams knew that aero was important. Afterall we had seen in previous years a scramble to understand how wings, ground effect and even fans could be used to extract downforce from the cars.

The component decisions made for the MP4/4 altered the approach the team had in terms of aero afterall the limitations of designing an F1 car is the packaging of these components vs the most aerodynamic efficient design, with this in mind in part 2 I'll look at the MP4/4 in terms or aerodynamics.

Heres a collection of great images of the MP4/4 for you to drool over that I have found through my internet travels: 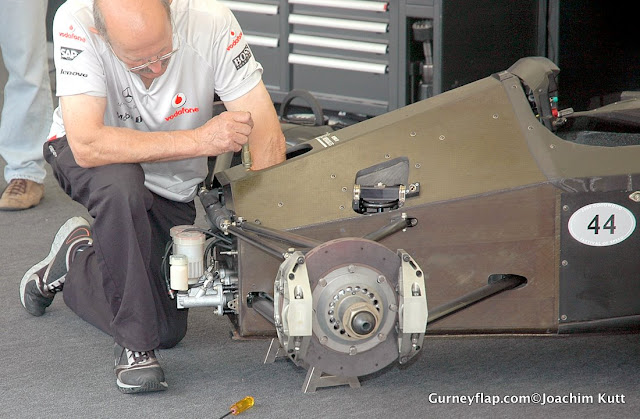 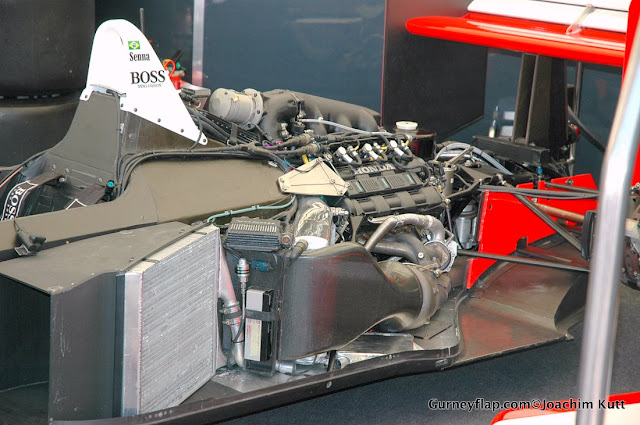 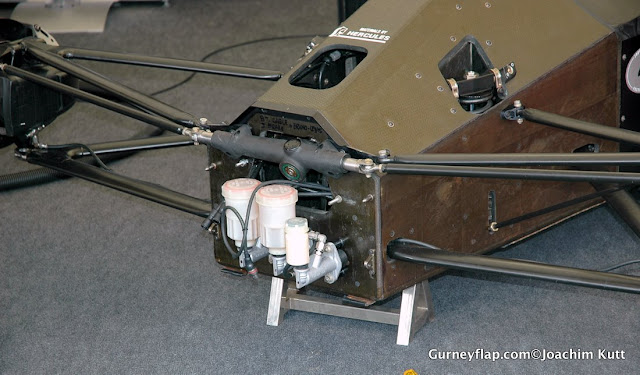 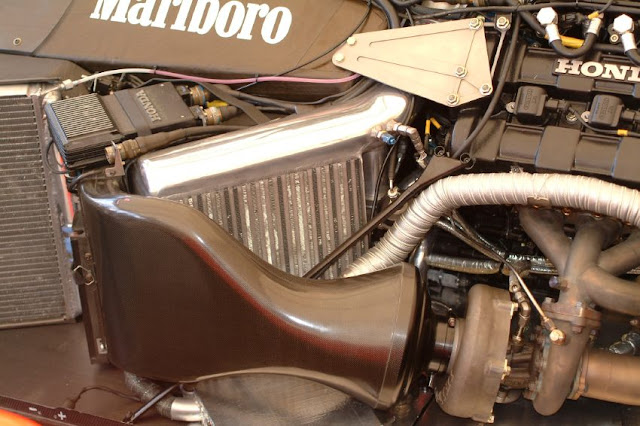 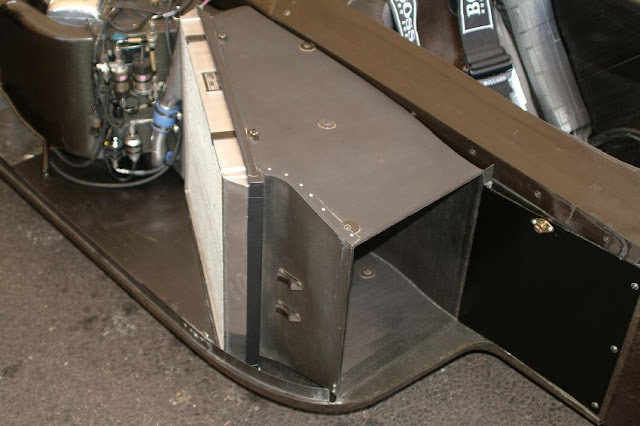 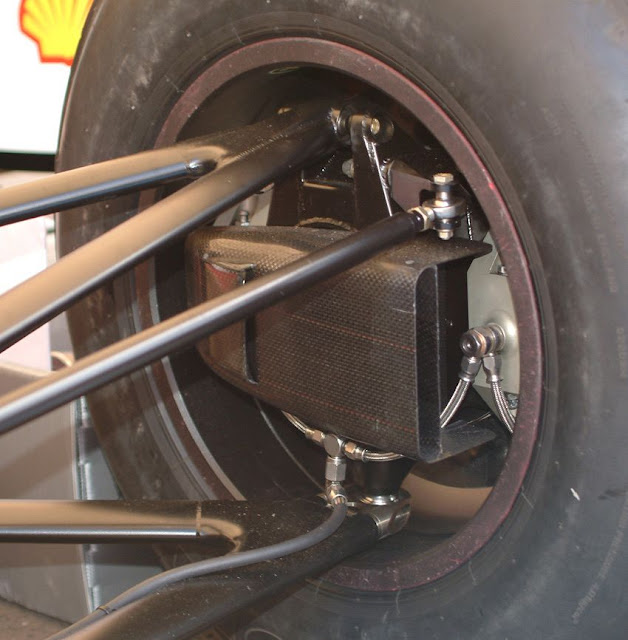 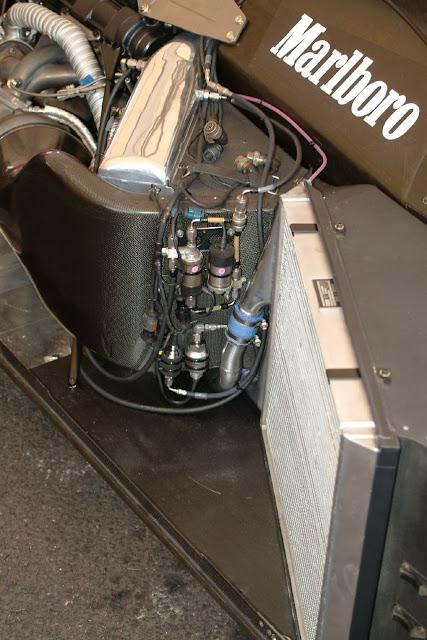 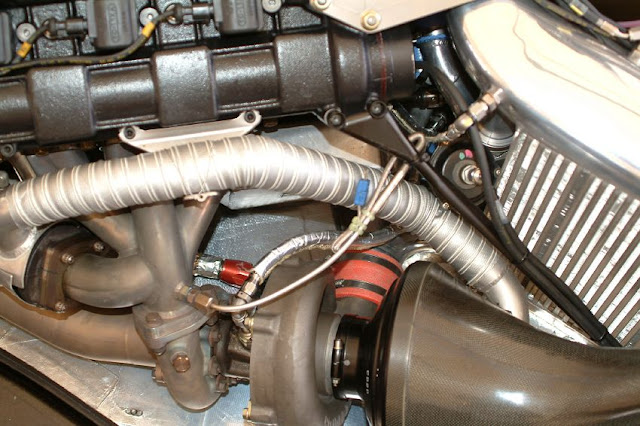 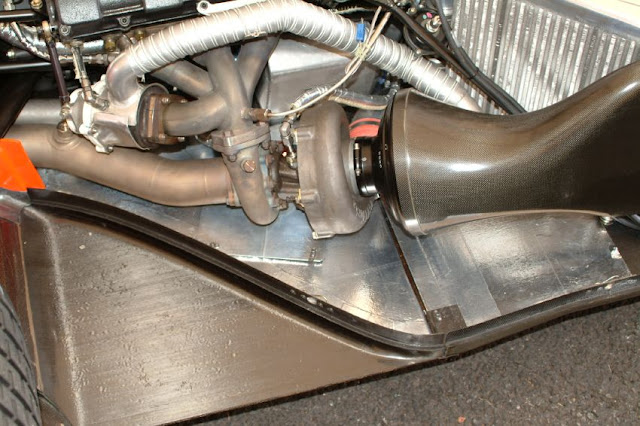 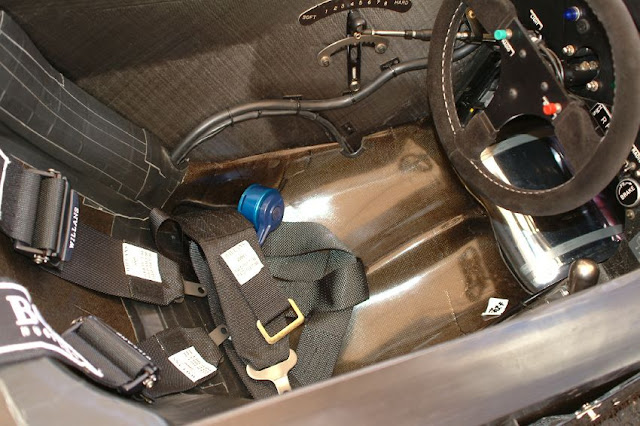