FIA show their teeth and force Pirelli to back down

I've already written at length this week about the Pirelli situation but I find myself at the keyboard once more, it's a topic that I feel compelled to write about as any decision made has significant technical ramifications for the season ahead.

Autosport / Jonathon Noble ran a piece last night (17/05/13) declaring the FIA's position on Pirelli's intention to make changes to their tyre range ahead of the Montreal GP.  The crux of the story centres around the FIA's insistance that changes only be made to the Italian tyre manufacturer's product on the grounds of safety.

Having already explained the 2013 tyres from a technical perspective on Monday: Pirelli - Are they really to blame? the tyre manufacturer released a statement on Tuesday declaring their intent to make adjustments to the construction of the tyres from Montreal onwards.

This came off the back of criticism before and after the race weekend from some teams and media alike, but whilst there were some on the back of Pirelli, both Will Buxton and Joe Saward produced equally great pieces highlighting the charms of the Pirelli rubber. 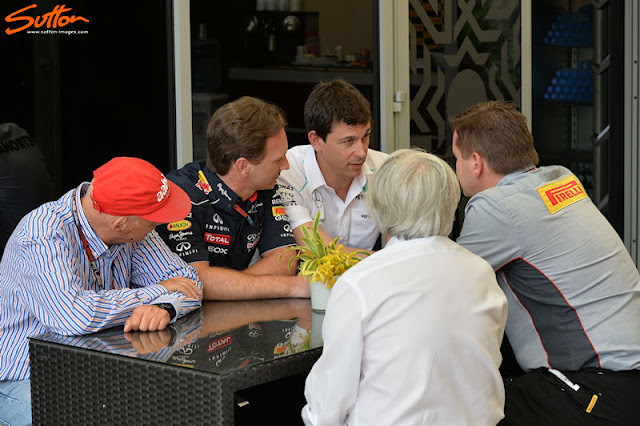 It's no secret that both Red Bull and Mercedes have put pressure on Pirelli since the start of the season, lobbying for change, and although I believe the media have made a great deal of the situation their criticism must weigh heavy on the heart.  Was the scene pictured above the straw that broke the camels back? I doubt it, but it's not often we see the likes of Bernie, Lauda, Wolff and Horner sat around a table chewing the fat with Paul Hembery.

I feel sorry for Paul, he is taking the brunt of the complaints after each GP at the moment.  as we can see in his usual post race 'The race according to Paul' below he has the look and sound of a man very much carrying the burden of the world on his shoulders.  (I thoroughly recommend watching his post race videos btw)

So why do we see Red Bull, Mercedes and Bernie questioning the Pirelli's? Well they're looking after their investment from a commercial point of view, make no bones about it, money makes Formula One wheels turn.  Being bested by other teams doesn't sit well with these teams and makes life difficult with their board of directors.  FOM (Formula One Management) have the commercial interest of the Sport to look after and so too are being lent upon by these teams to affect changes, however it's the FIA that set the rules of the sport and so their renewed show of defiance will perhaps antagonize the situation.

I have spoke to fans on both sides of the fence and all give good arguments for and against this years Pirelli tyres, but the facts remain that the teams themselves seem to be poorly managing the situation.  The tyres aren't made of cheese, going off after half a lap and they are consistent, giving up grip early on and fading away.  The teams however are intent on making the stints last longer and so ask their drivers to drive to a delta, a situation born out of managing the progress of the Lotus.  Ferrari however realised that by driving flat out in Barcelona and having one additional stop that they could hold off the Lotus.  Watching the race back it is marginal, with Kimi's race being hampered by Vettel for 3/4 laps but this really only highlights the Lotus' great tyre usage.  So teams, I challenge you, stop pussy footing around put some extra fuel in the car and go racing.

The fact of the matter remains that any change to the tyres, large or small will have an effect but with the FIA ruling out changes lined up to reduce degradation levels we can expect only a small nuance of the degradation level to change.  The tyre failures we have seen so far this season may have looked spectacular but they have in most cases allowed the driver to either conclude the lap they were on or get to an area of safety.  The construction of the tyre allows the tyre to deflate when impacted by debris but be rigid enough to support the car, this however leads to the tread pattern overheating at which point it delaminates from the tyre.

Hopefully some clarity will arise from Pirelli / Paul Hembery in due course in regard to the change we may see for the GP's ahead, but by the looks of it the debate will continue to rage on until the teams get a handle on the tyres later in the season (just as they do every year).