Well it's kept twitter awash with the usual anti Red Bull sentiments over the last day or so with Autosprint running a story that Red Bull may be using a form of Traction Control, pointing the finger at their revived pace during the Montreal weekend.  It's a story that developed initially over on F1Technical's forum with a picture of Mark Webber's car laying rubber on the circuit after his collision with Van der Garde at the chicane. 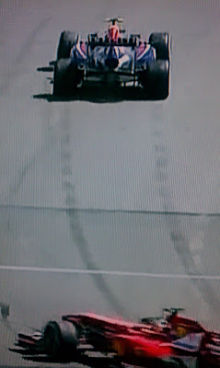 The image shows breaks in the rubber lines as Webber's car takes off down the straight whereas we tend to find when these lines appear on the circuit elsewhere they don't have the breaks.

Some footage of the incident has of course arrived via YouTube and I'm sure will be taken down in due course but for the moment here it is below:


It's a none story for me but I felt compelled to write a few words about it whilst the buzz surrounded the matter as confusion arises throughout the fans.  Traction Control is, as we know banned in Formula One and any attempt to try and use it would be easy to see due to the use of the SECU.  As an explanation for the tread marks I think we have to consider the following:

I have looked through the available onboard footage from Montreal and the incident isn't included, so I cannot establish whether Mark made changes on the corners exit to his diff or whether it was simply a case of too much right foot and KERS.  The fact of the matter remains that calling this a use of Traction Control is a reach by people trying to understand where Red Bull's pace came from in Montreal.  The team did take a plethora of upgrades to the race which I looked at here: http://www.pitpass.com/49282-Canadian-Grand-Prix-Technical-Analysis