How much difference can changing the tyres make?

Tyres have been a hot topic of conversation over the last couple of seasons with teams unable to 'switch' on the 2012 tyres and keep them in the operating window early in the season.  Meanwhile this season has seen the teams draw a line in the sand as some clearly got it right early on whilst others struggled.

2012's construction featured a sidewall that didn't deform dramatically under load, the downside of this is the tread platform wasn't rigid enough to provide a significant contact patch.  (The contact patch is the area of the tread platform that is exposed to the track)  With a stiff(er) sidewall and narrow contact patch the tyre becomes more difficult to 'excite', creating difficulties for the teams in extracting 1 lap performance (Qualifying).  Moreover the management of the tyre over a race distance exacerbated this challenge as the delta between 1 lap qualifying pace and creating a race strategy led to the tyres 'falling off the cliff' toward the end of a stint.  The 2012 construction also led to further frustration as the contact patch of the tyre was more or less a tram-line with the shoulders of the tyre wearing more heavily than the central portion of the tyre.  This meant that as the tyres came off the car they'd often look beaten on the outer edges but have plenty of life left in the centre of the tyre.

Of course as the season progressed the teams used setup changes (Camber, pressure, temperatures, etc) in order to relieve some of these issues.  Their challenge was also eased as Pirelli reduced the severity of their compound choices making it much easier to make the appropriate stint lengths work.

Enter a new tyre construction for 2013, with Pirelli looking to bring a more performance orientated design to once again challenge the teams.  The 'Mark 1' Pirelli 2013 Tyre (Used from Melbourne to Silverstone) featured a much more forgiving sidewall mated to a tread platform that was significantly beefed up.  The aim of this was to bring an emphasis onto thermal degradation. (the movement of the sidewall increases the temperature within the tyre)

This mechanical advantage (the tyres get upto temperature and stay within that window more easily) came with an aerodynamic downside.  The deformation of the sidewall leads to increased airflow instability which can cause issues in crucial area's of the car, none more so than the Diffuser.  'Tyre Squirt' is always an issue for the teams as it impinges on the natural flow of the Diffuser, disrupting it's ability to produce downforce.

Over time the teams found a way to increase the performance of the Diffuser by reducing the impact of Tyre Squirt, this was initially done via EBD (Exhaust Blown Diffuser's 2010/11) where the exhaust plume was directed in the gap between the tyre and the car's floor.  This is what many corner's of the media refer to as 'Sealing the diffuser' as it creates an airflow skirt, allowing the diffuser to work more efficiently.  When the FIA made adjustments to the regulations in 2012, the teams once again outsmarted them by using the 'Coanda' effect to target the exhaust plume in a similar region to the previous EBD solutions.  Of course the effect is reduced when compared to EBD but it is a far better solution than not having it. The image above is a basic explanation of how tyre squirt can influence the diffusers performance with Yellow representing the airflow moving over the cars floor to the rear tyre, blue represents the airflow moving under the car and through the Diffuser, whilst red indicates the intended target of the exhaust plume.

The use of the 'Coanda' style bodywork by the teams has also led to an increase in the use of both tyre squirt slots and vertical floor strakes ahead of the rear wheels.  The quantity and intricacy of these have increased throughout 2012/13 as the teams try to further manage the effects of tyre squirt on the diffusers performance. 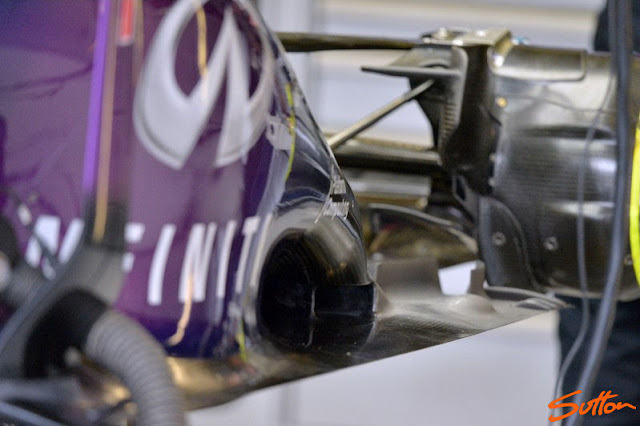 Above: As an example Red Bull have this season run with 2 Strakes rather than 1 and added an intricate selection of tyre squirt slots. These slots and strakes further manipulate the airflow, increasing the exhausts effect of sealing the diffuser.

This season has also seen a rise in teams adopting leading edge holes in their Rear Wing Endplates, a design decision implemented by Williams, Force India, Toro Rosso and Marussia in 2012 we now find similar solutions being used by Red Bull, McLaren and briefly (Silverstone) Ferrari.  These holes allow airflow that would normally be encumbered by the Endplate to bleed through to the other side, reducing the pressure in that region.  On top of this, throughout 2012 most teams ran brake ducts that featured a vertical section on the end of the fins, for 2013 these have disappeared from most teams designs. 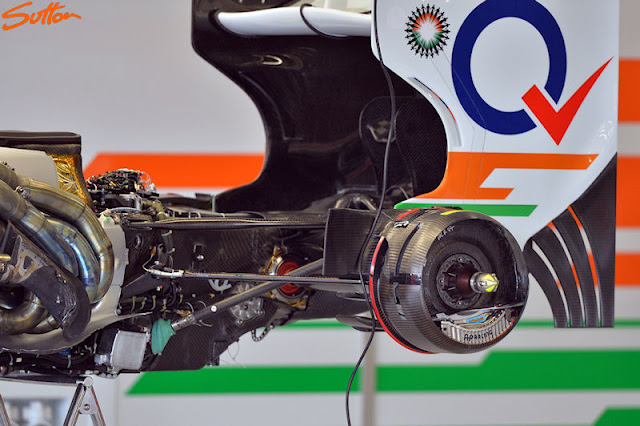 Above: In this image of the VJM06 we can see the hole placed at the leading edge of the Rear Wing (Just in front of the blue O)

The issues created by the deformation of the tyre are not isolated to the rear of the car either, the Front Wing is the first element to guide airflow, whilst generating vortices that set up flow structures further down the car.  The front tyres deformation therefore means that the teams have re-designed elements of the front wing in order to cater for this, rectifying any issues being caused downstream.

The tyres being tested currently at the Young Drivers Test at Silverstone and to be used for the rest of the season feature the same construction as the 2012 tyres but the more aggressive compounds from 2013 will be allied with them.  These Mark 2 tyres therefore offer both a different mechanical and aerodynamic set of principles to those seen so far this season.

Essentially what I'm getting at is that the teams have adapted their cars to meet with the challenges of the Mark 1 2013 tyres.  What we saw at Nurburgring (Pirelli's Mark 1.5 interim tyres) was a change in fortune with Force India struggling whilst teams like McLaren and Sauber took advantage.  This change was subtle one and most likely had more to do with the FIA banning Tyre Swapping and putting restrictions in place for the camber and pressures used by the teams.

It's a curve I expect will continue to become apparent with the teams responding best to the change in construction (Mark 2) taking advantage early on.  Teams like McLaren, Williams and Sauber have already been vocal about their situation being born from a misjudgement of the 2013 tyres during the birth of their cars and so a switch to the Mark 2 Tyres will only aid these teams in their pursuit of performance.  Furthermore the advantage gained by some teams who utilised tyre swapping will be nullified with the Mark 2 tyre being symmetrical whereas the Mark 1 tyres were asymmetric.

I suspect over the next few races we will see teams taking retrospective steps in order to better extract aerodynamic performance from the 2013 Mark 2 tyres.  The likely result will be changes around the Front Wing, in front of the Sidepod, on top of the Sidepod (Vortex Generators / Fins), the floor around the rear wheel, rear Brake Ducts and the Rear Wing Endplates