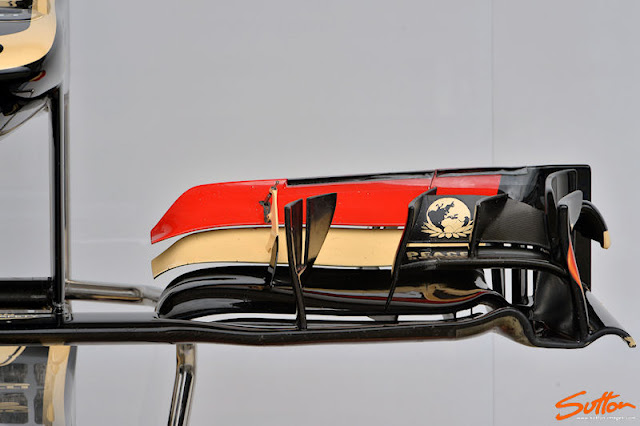 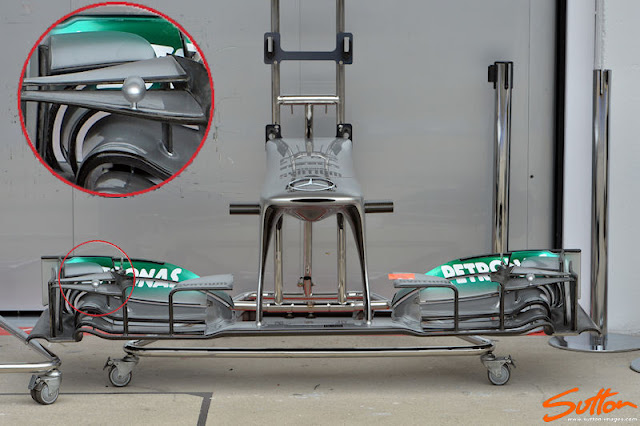 Mercedes W04 Front Wing and Nose.  Several things of interest here, notice the team have added a subtle 'Pelican' bulge under the nose.  This will alter the airflow characteristics in the region having an ongoing effect downstream toward the Turning Vanes and frontal region of the floor and Sidepods. The Inset shows the team have also added a Canard on the secondary section of the Endplate.  The Canard sits horizontally behind their usual Cascade and is likely in response to the change in construction of the tyres for this race.  The Canard will further aid in the manipulation of airflow that the Cascade usually conducts as the airflow heads toward the front wheel/tyre. 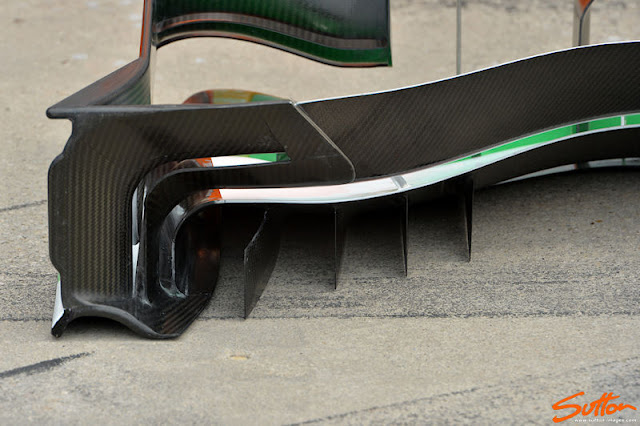 Force India VJM06 - Front Wing from behind, this great shot shows exactly what's going on behind the Front Wing Flaps.  The lower strakes align with the strakes added to the front of the wings flaps over the last few races and are used to guide the airflow ahead of the front tyre.  The rotation of the tyre behind the Front Wing also creates a pressure build up with errant airflow trying it's best to destroy any airflow regime.  The strakes aid in countering this and turn the airflow on the desired trajectory. 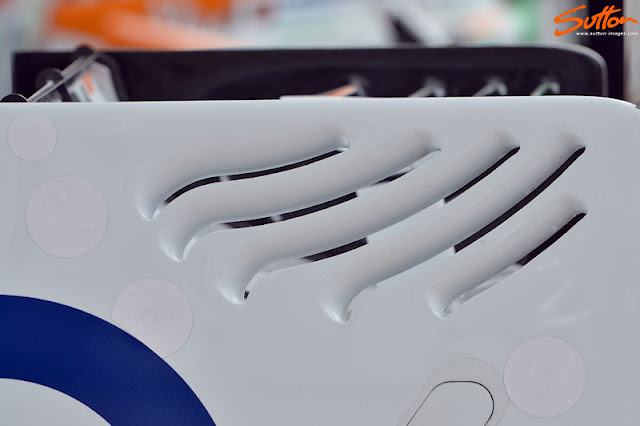 Force India VJM06 - Rear Wing Endplate Louvres - as we know, these louvres help to bleed pressure from the outer portion of the wing reducing drag. 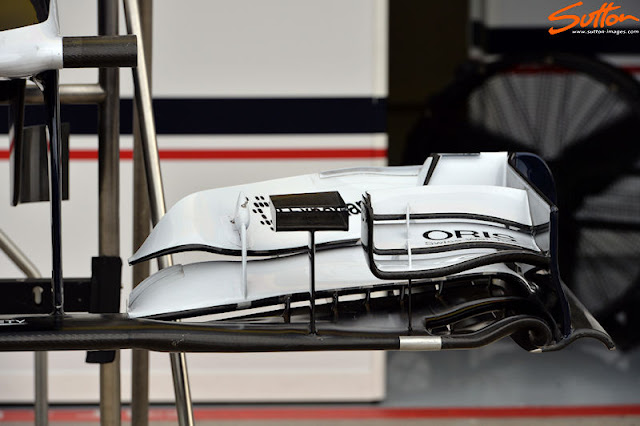 Williams FW35 - The newest of two Front Wings on show, this one features a standalone minor Cascade whilst the larger Cascade is split into 3 tiers 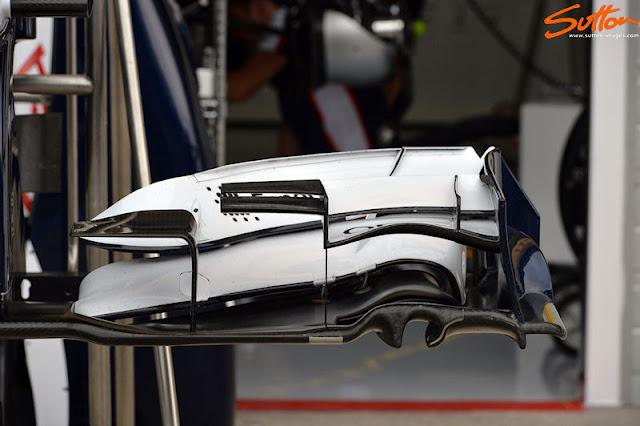 Williams FW35 - The other Front Wing on display is a descendant of the FW34 with the addition of a turning strake added within the main Cascade. 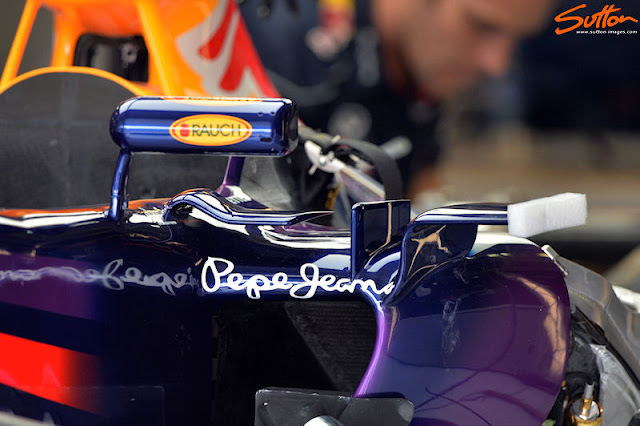 Red Bull RB9 - This is an area that has been of relatively small development for Red Bull this year with similar Vortex Generators adorning the '9' as were on it's predecessors Sidepod.  The team have arrived in Hungary however with a new horizontal Cockpit Fin/Canard that replaces the inner VG.  Furthermore, the shoulder joint (pictured here with the foam on the end) has been slightly inbound lengthening the distance between it's joint and the Airflow Conditioner outbound. 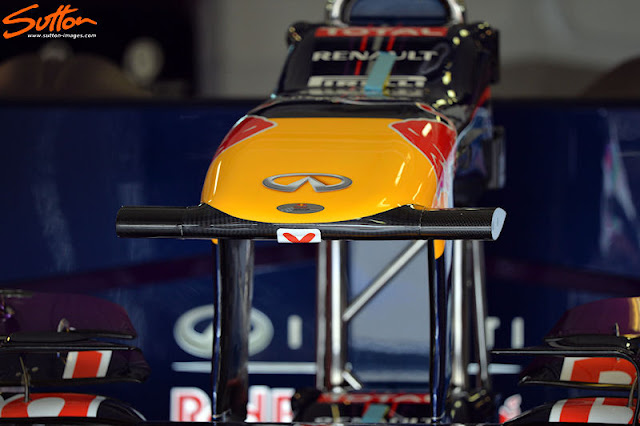 Red Bull RB9 - The team seemingly have 2 distinct design philosophies with regard to the placement of the FOM camera's.  At Silverstone the team moved the camera's rearwards but for Nurburgring and once again here in Hungary we find them back in the Hammerhead position.  Not only do they create a trailing vortex off the outer edge but their placement in the nose tip position generates a small amount of downforce.  This is especially helpful around higher downforce configuration circuits such as the Hungaroring as it helps to make the car a little pointier. 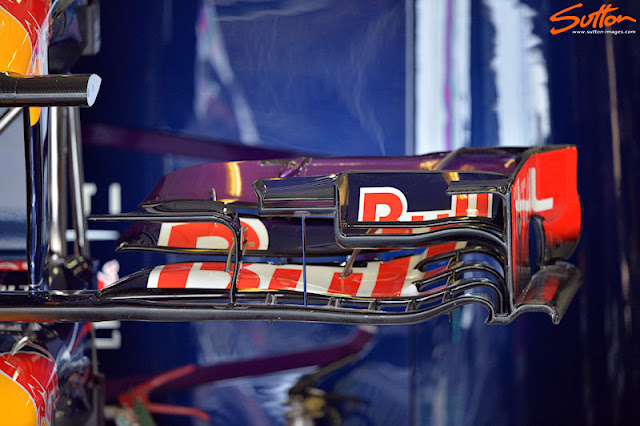 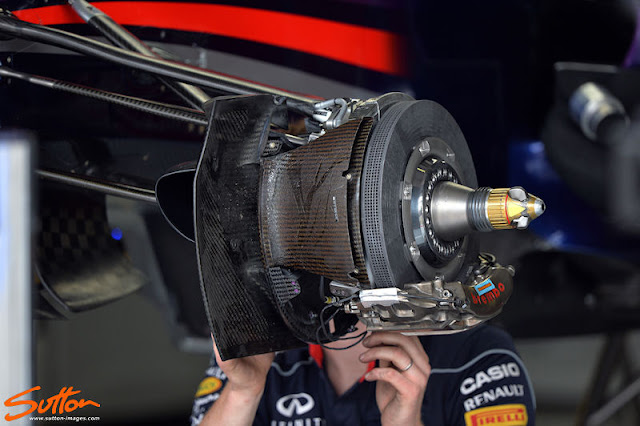 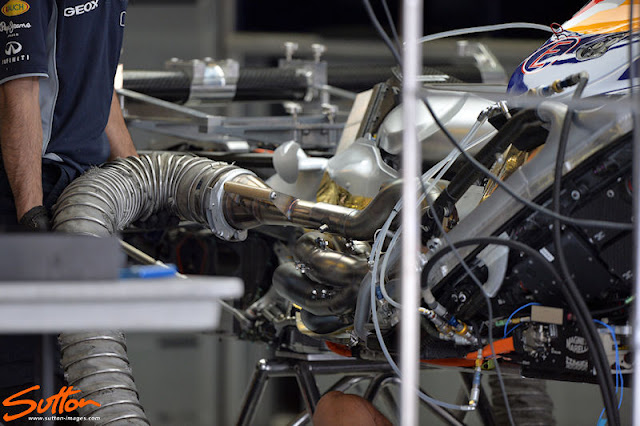 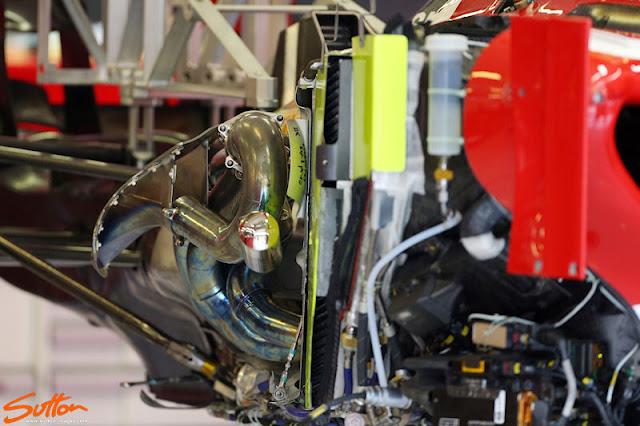 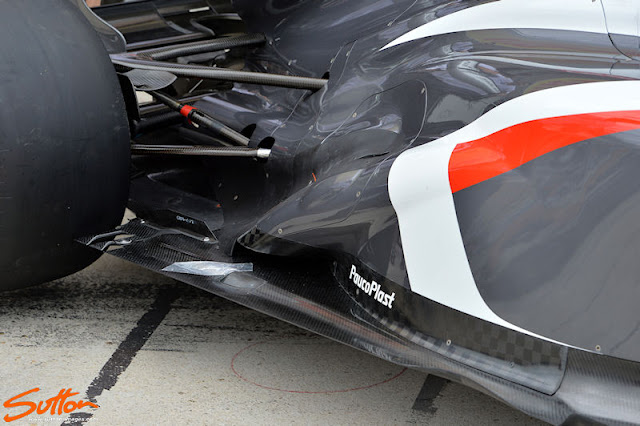 Sauber C32 - Exhaust and Cross Under Tunnel bodywork as tested at the Young Drivers Test, more images below 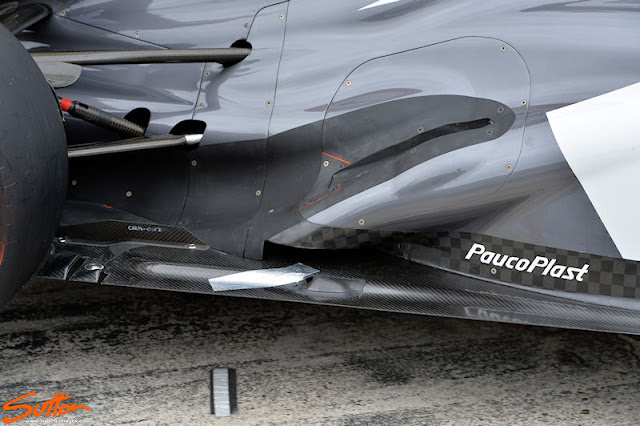 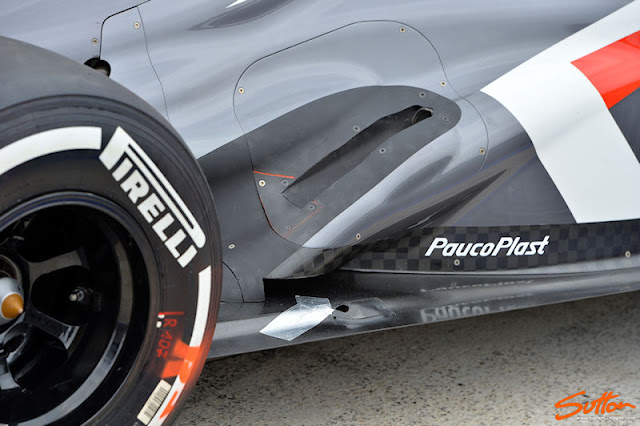 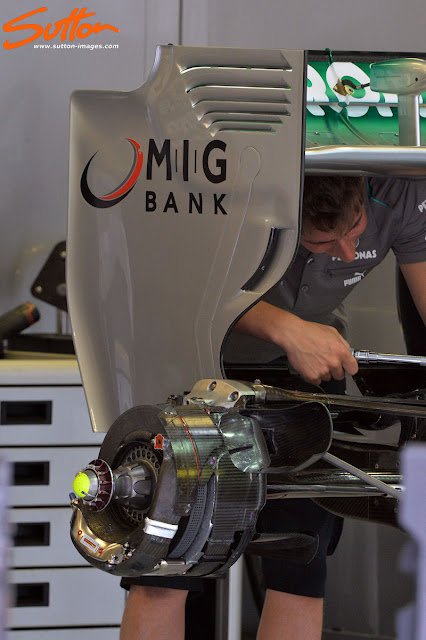 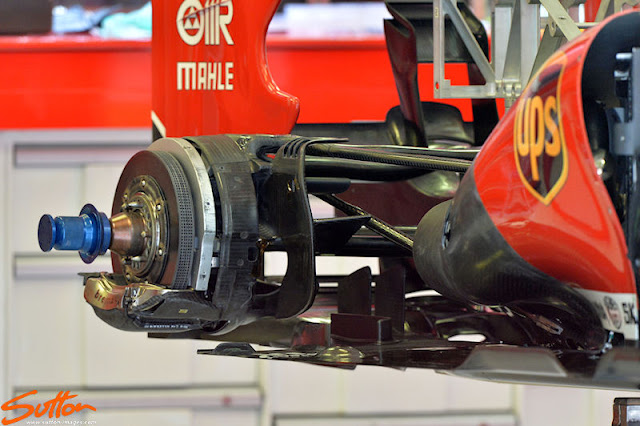 Ferrari F138 - Rear end during build up, note that the team have reduced the number of Vertical Floor Strakes behind the exhaust solution from 3 to 2 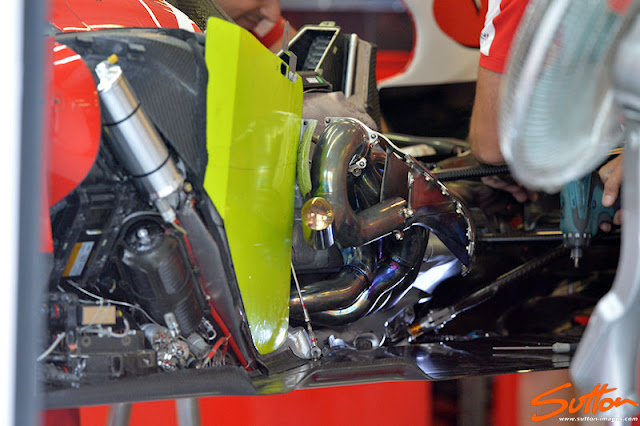 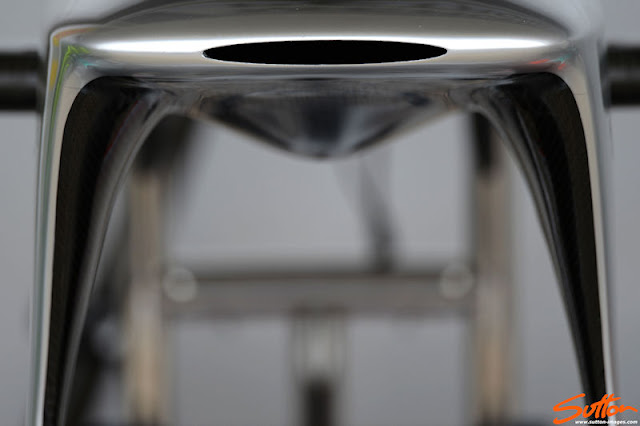 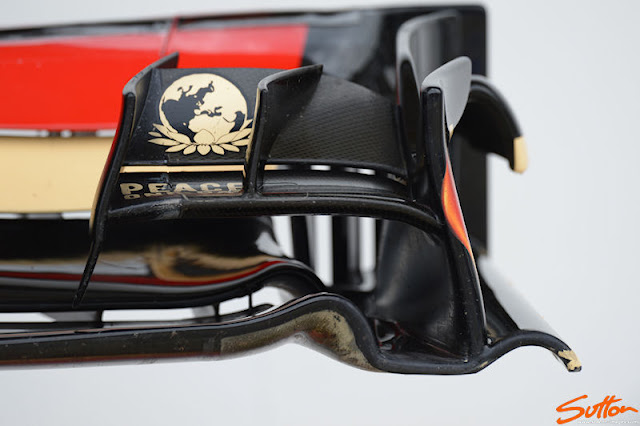