Mercedes were of course venturing a little into the unknown in Hungary having been excluded from the Young Drivers test where other teams had, had the luxury of testing the new tyres. They could however take solace in the fact that the construction is the same as Pirelli provided in 2012, meanwhile the Italian tyre manufacturer were also able to share the data collated by their engineers at YDT. Tyres have been the bane of Mercedes existence since their rebirth in 2010 but no more so than this year with the Brackley squad seemingly being able to hold a candle to their rivals Red Bull through qualifying. Up until Hungary the team have performed well on a Saturday but gone backwards throughout the race as their tyres thermally degraded quicker than everyone around them. The return to a 2012 construction therefore should have been music to Mercedes ears with the team able to take a fresh approach to tyre management.

In light of the change in tyre construction Mercedes have obviously been working closely with their wheel manufacturer Advanti. Advanti started working with Mercedes this year but have plenty of F1 experience having supplied wheels to Toro Rosso since 2008 (until the end of 2012). The reason I bring this is up is a possible development made to the rear wheels. Up until now the team have played with painting the inner face of the wheel black, this has more to do with heat absorption/dissipation than aesthetics (See image below). Along with the dotted sections inbound you also note in the image below that a strip on the face has been definitively marked with a 2 silver bands set around an inch apart. 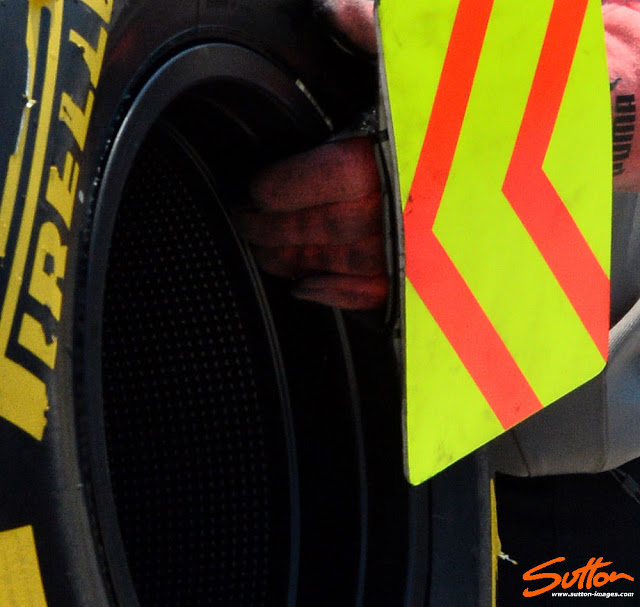 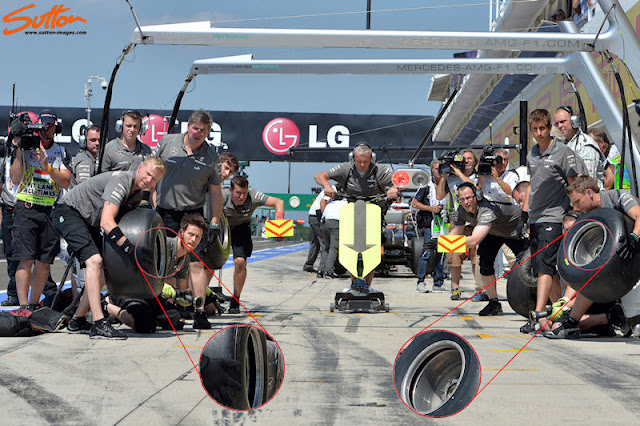 This image shows the team have reverted to a normal finish on the inner face of the wheel but what does remain is the roughly 1 inch strip toward the inner shoulder of the wheel. 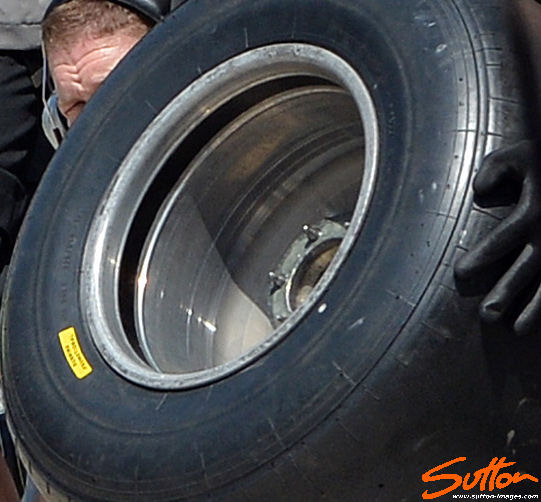 As we can see in the image above a much larger bead/lip defines the edge of this strip on these wheels, now both @F1Talks and many of the folks over on F1Technical.net's forum are concluding that this is indeed an aperture in the surface of the wheel (as indeed did I at first glance, until I looked deeper at the past design of the Mercedes wheel).  Now going from what the eye see's (or perhaps wants to see) that could be one explanation with an inner structure of the wheel allowing airflow to permeate the inner structure of the wheel thus cooling the wheel and in turn the tyre. It's a fanciful notion perhaps but could a double skin within the wheel not only be strong enough to cope with the forces at hand but also allow air to transfer from one chamber to the other dissipating the heat?

Personally I don't think so I simply believe they have learnt from their experiences so far this season by coating the inner face of the wheel black and adapted it for use with the 2012 construction.  Afterall we know that Mercedes decided to drop their 'Coanda' exhaust after Austin last year as they were over heating the shoulders of the tyres.  Of course they have developed their 'Coanda' exhaust hugely for use on the W04 but it could still be a concern with a change back to 2012 specification tyres.


Another lesson in perception perhaps with the black strip simply being a coating to the wheel but it is still something that Mercedes are trying in order to reduce the temperatures and therefore degradation this season.
Tagged
Newer Post Older Post