Some would say the FIA have taken swift and decisive action in order to avoid a repeat of the incident that befell FOM cameraman Paul Allen during the German GP.  However the problem still remains, all that has changed is the likelyhood of someone that's not part of the pit crew (ie wearing protective clothing) being struck by an erant wheel.

So what went wrong?

Since 2010 (Post refueling era) the teams have looked for ways in which to speed up the process of changing wheels during Pit Stops.  This wasn't such a problem during the refueling era as the car would be stationary for many more seconds getting fuel than was needed to change the 4 wheels/tyres.

All the teams have similar retaining devices now but as it was a failure on Webber's car, lets look at Red Bulls 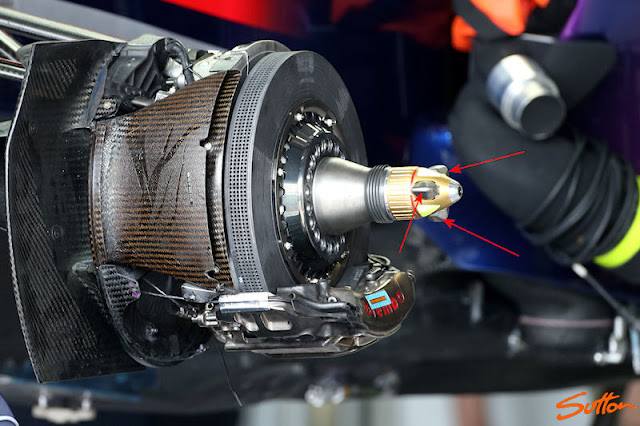 In Webber's pit stop it would appear that the wheel was placed on the rear right of the car but the gun failed to thread the wheel to the axle.   However more importantly as the retainer's weren't in their locked in position as the gun came off the axle, the wheel spun off the axle and careered down the pitlane.

So what's changed to make these Pit Stops quicker than pre 2009?

Pre 2010 the retainers used on the axle were different to the ones we see in use today, with a clip in the end of the axle required to be operated by hand after the wheel was attached.  As can be seen in this video below (Scroll  through to 3.24)


This adds a further element to the process of the pitstop and so to generate quicker stops the teams abandoned it for what we see now.  But is it time to mandate how quick a stop can be?  Reverting to this style of wheel retainer is one way of adding an element of safety back into pitstops as it's additional procedure for the pit team to undertake.  However by virtue of that exact same statement it's another element of the stop that must be completed to get their driver out of the box as quick as possible and could be missed or fail.

So what else can be changed to prevent this kind of Safety issue re-occuring?

You could argue that with around 18 team members crowded around a car it is too many, but with fewer personnel the pressure to complete the tasks at hand only increases. I was fortunate enough recently to try out a pit stop scenario when I went to Red Bull's Openhouse.
Armed with the wheel gun my task was simple enough, remove the nut with the gun so another member of my team could take it off, another mounted a fresh wheel and I use the gun to put the wheel back on.  Sounds simple doesn't it.  Our first attempt was around 11 seconds, some distance from the 2 second world record we've seen Red Bull achieve and yes of course we were not using current equipment or the correct gun pressures etc but it becomes apparent very quickly where the time gets eaten.  Our best stop was just over 7 seconds (best of the day was around 6.5) and felt extremely quick but I'd still say we had the ability to go quicker.  We hovered around the 7 second marker for 2-3 attempts before I had an issue with the nut coming out the end of the gun.  Having watched in slow motion as it fell to the ground I scooped it up, placed it back in the gun and completed the stop in 13 seconds, not bad having had an issue.  However it brings to light how things can and will go wrong, we didn't have the pressure of a race driver sat waiting for us to do the job, the intense heat emanating from the car or perhaps most importantly the car coming to a stop from the pitlane speed limit.

The FIA did make some efforts to slow teams pit stops down when in 2012 they banned the use of Helium for driving the wheel guns.  Helium was being used as it is of a lower density than air and so spun the gun quicker giving rise to the opportunity of a quicker pitstop.  Since then teams have continued to make strides in this area by virtue of the guns design and the thickness/diameter of the piping used to transmit the air to them.

As Pit Stops represent both a human challenge and an engineering one, the latter could be removed with Wheel Guns and associated equipment spec'd by the FIA.  All of the teams currently use Dino Paoli manufactured guns anyway (along with the GP2, DTM, WSR etc field) but their spec varies dependent on the team.  Dino Paoli do have a Torque sensing gun with built in Torque sensors that illuminate when the correct torque loading is seen and could or plausibly already have been integrated into the teams traffic light system pit release boards.  These illuminated pit release boards have been controversial since their inception with different levels of success as the technology has improved, for me though they offer no difference to a lollipop as the human element is still involved at the end of the process giving the signal to proceed.

The last and perhaps only real way of reducing incidents is introducing a time component into the stops, with stops averaging 3 seconds but errors/failures increasing this time exponentially it could be argued that the pressure of generating the quickest stop ever would reduce some of the error factor.  A mandatory time stationary would enable the pit crew to complete their stop without the pressure they currently face leaving the driver to leave the pits in a more controlled manner.  The teams could continue to complete their stops as quickly as they desire but a stop/go system controlled by the FIA would signal whether they were free to leave in the mandated time.  It's difficult to quantify but with the stops we are currently seeing, even double (6 seconds) should be enough to control the pit crews pace and reduce errors.  I'd however be inclined to see a 10 second stop and go, to cover other eventualities.

I'd enjoy your comments on how you feel Formula One could reduce the risks involved in Pit Stops and as always will do my best to answer any questions you may have.
Tagged
Newer Post Older Post