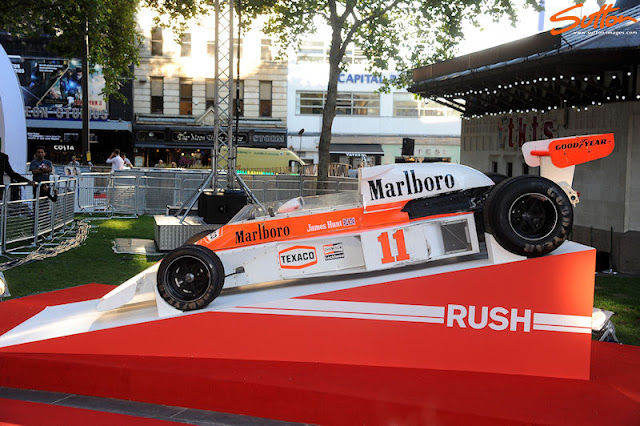 Ron Howard is a director that gets involved with projects you can't help getting excited about, however when I heard he was making a film about the 1976 Formula One World Championship battle between Hunt & Lauda the skeptic in me became aroused. Motorsport films have been somewhat of a damp squib in the past as the excitement that builds from the sport itself is often more engaging than a re-creation. One film/documentary that has been able to transcend this recently was Asif Kapadia's Senna, this however used old footage cleverly cut together to tell the story of the late great Brazilian in a quite unique way.

In contrast Rush is a typically Howard stylised feature film breathing life into a script that bears a significant resemblance to the actual events that unfolded in 1976. Obvious liberties have been taken in order to embellish on the already tempestuous relationship that surround James and Niki but this doesn't detract from the raw feel of the film. Finding a balance between the story telling element and the on track action is always an issue for motorsport films and that's why their rivalry works. I'm left impressed though that Howard et al managed to engage in other build up relationships like James' with Lord Hesketh and Niki with BRM / Clay Regazzoni rather than just engaging in the all killer no filler approach of the '76 season.

In terms of the racing some great scenes / footage is presented throughout the film that will not only engage the race fans amongst us but the general movie goer too. The battle between the heart and the mind is a strong element running through the core of the film with references made to the dangers of motosport. None more so than the scene of the decimated Tyrell and that of Niki's Ferrari 312T2 on fire having ruptured it's fuel tank in the crash at the Nurburgring (having replaced the high airbox 312T at the Spanish GP). From here on in the film strives to show the battle between triumph over adversity with Niki recovering to pilot the 312T2 at Monza.

Technically the film covers aspects of the sport beautifully like the problems encountered by McLaren when their car was deemed to be too wide following Hunt's win in Jarama. Of course the eagle eyed fans will probably note that certain aspects aren't right to which I tried to shut off and just watch the film rather than do my usual anorak level of car deciphering. After writing this review though I find myself pondering whether the Ferrari shown on screen was always a 312T2 as I don't recall seeing the taller airbox of the 312T in the early race scenes. (I guess when I watch it again in 10 or so days time I'll be looking out for these foibles)


Formula One remains a difficult sport to portray on the silver screen for the reasons I've mentioned above but I applaud what has been done with Rush and encourage motosport fans or otherwise to give this film a look.