Allianz have been working with the Mercedes team and drivers on a series of video's highlighting the processes involved in producing a race winning car, the transferable technology that can be utilised in road cars and the increased safety the sport now operates with.  I last covered the series when they looked at the importance of seat design, for this episode though the focus is on the Monocoque / Chassis.


As explained in the video above the carbon fibre monocoque is now a ubiquitous design element of the F1 car.  It was first introduced by McLaren in 1981 with their MP4/1 and has since changed the landscape of both design and safety within the sport. 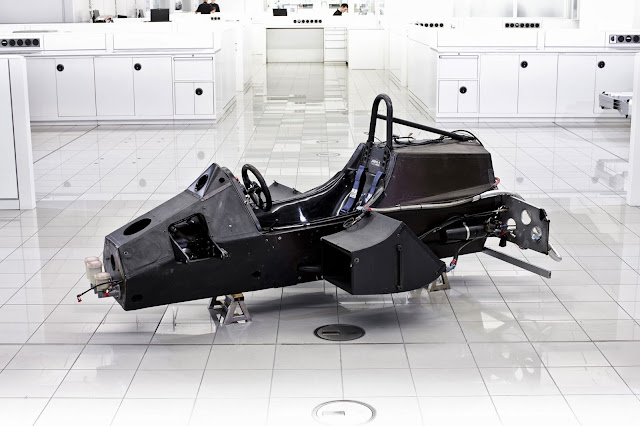 It's predecessor would be made from aluminium which although fairly strong doesn't have nearly the same type of tensile strength it's modern counterpart has.  Although both material will deform under load the carbon fibre monocoque is made up of many layers, with the carbon being laid up in many opposing directions to increase it's strength.  This invariably allows the material to flex absorbing load/impact that a singular material like Aluminium simply cannot achieve.

It's also important to realise that due to the way carbon fibre is worked with at the factory the chassis can be designed in ways that simply aren't achievable in a material like Aluminium, further increasing it's strength and safety for the driver who sits within it.

Although the sports technical regulations restrict many areas of the chassis' design each team will still utilise their own design concepts to extract further performance from it.  Be it aerodynamically, safety or rigidity each teams chassis is catered for different needs.  Safety of course remains a paramount concern with the rules being constantly amended in order to decrease the risk of injury in an impact.

The Allianz Drive Safely campaign looks at many facets of how the team and drivers approach design and safety within Formula One.  A look at everything from helmets, HANS devices, tyre philosophy, strategy etc etc can be seen in more detail here:  https://www.youtube.com/AllianzDriveSafely with members of the team and both their drivers using relate-able methods to explain the intricacies of the sport.