F1 races and indeed Championships have been won and lost by the tiniest of margins and so it's often the small elements implemented by the teams that add up to make a difference over their competitors.  In my last article on Red Bull I surmised that a 'perfect storm' is the reason for Red Bull's sudden meteoric rise to the top of the grid.

There was still something bugging me though, something I'd clearly missed and was contributing toward their pace / tyre management since the change of construction by Pirelli.  Red Bull's dominance throughout the regulation set that's been in place since 2009 has largely centered around their ability to extract more performance than the rest of the grid from the Diffuser.  Performance is clearly being extracted from many facets but at this GP 1 photo has made things a little clearer on what the team have changed in order to extract more performance.

Before we look at that photo lets look at a picture of the car from Hungary as this was the last GP with which the team ran their old Diffuser configuration. 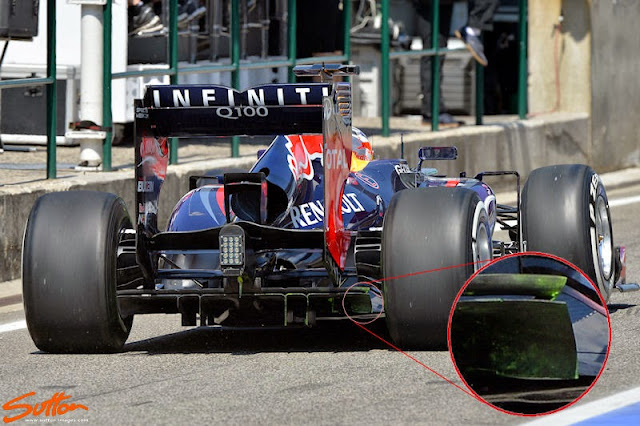 In the picture above we can see that the team have the same full length perforated Gurney they'd ran on the car since the start of the season.  The Diffuser's outer design had been designed to cater for the softer sidewall of the early 2013 tyre's construction which compromised the Diffuser's ability to create consistent downforce. (Ride Height changes)

Lead and response time to the change in Pirelli construction was too short after the controversies of the British GP to have new components ready for Germany & Hungary.  This meant that as the team prepared their car for the Belgian GP they were doing so in reaction to tests they had conducted in those preceding GP's (Flo Viz and Pitot Tube Arrays / Rakes used during Free Practice sessions).

Furthermore with Spa and Monza being both medium to low and low downforce configuration circuits respectively their configuration is bound to differ when compared to the Singapore and Korean GP specs. 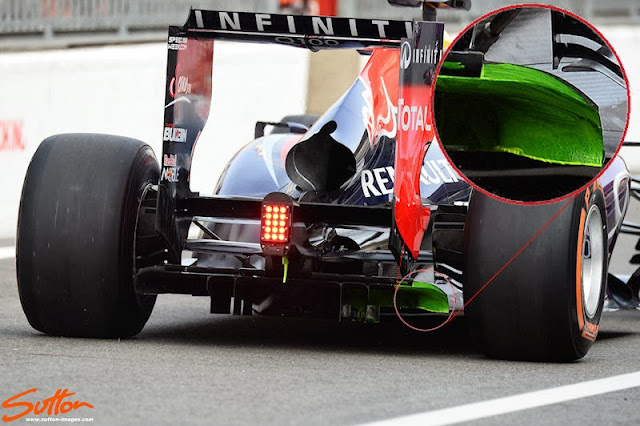 As we can see in the picture above the Spa & Monza configuration featured a Gurney that was only perforated in the central section with a more traditional blunted outer portion.  This I believed was that the team were happy with the Ride Height efficiency of the outer portion of the Diffuser which was now being sealed more effectively/consistently with the change back to 2012 construction tyres.  This is because the idea of the perforation in the Gurney is 2 fold, it not only reduces an element of drag (although drag generated at the Diffuser is always less than that of it's Wing counterpart) but increases the efficiency of the Diffuser over a wider Ride Height / Speed threshold.

What I missed has become apparent to me over this GP weekend and that's the inclusion of a upturned curved element in the outer footplate.  (After looking at the images below take another look at the one from Monza and you can just see the scroll poking around the periphery of the Diffuser) 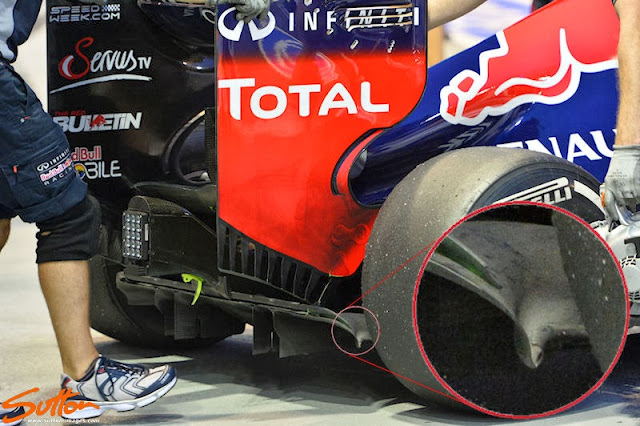 In the magnified section of the image above from Singapore we can see how the footplate has received a footplate scroll, the winding of this section at the tip of the Diffuser will be extremely beneficial in creating additional downforce.

Why? you ask, the Diffuser relies heavily on the edge vortices it generates to create downforce, the Diffusers angle, size and it's height from the ground are all heavy influence-rs on downforce generated by it.  The outer portion of the Diffuser is perhaps the most important section of the device with the spacing and orientation of the inner fences or strakes also a contributing factor in how these vortices are managed.  Many studies have shown that as ride height decreases the edge vortices enhance the downforce generated until such a point the vortex bursts and a loss of downforce occurs.  Taking this into account and the fact that Red Bull work in opposition to the trend (High Rake) we must assume their intent is to increase the edge vortices via outside methods otherwise the increased height would mean a loss of downforce.  This of course comes in the form of the exhaust gases which are directed at the outer footplate of the Diffuser energising the vortex's vorticity. 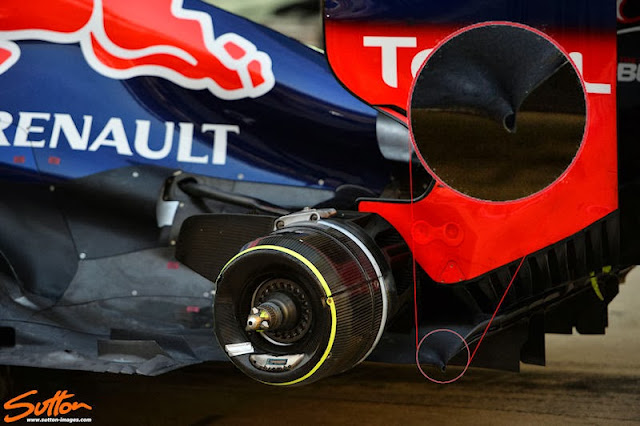 The scroll that has been added to the outer portion of the Diffuser should capture and re-purpose the exhaust plume and energise the Diffuser.  By funneling the airflow at the tip of the Diffuser the airflow is itself vorticised and will strengthen the flow inside the Diffuser.  Compared to the Louvres we see used on the Endplates to reduce drag by allowing airflow to migrate between the 2 pressure gradients and stop the roll up of a vortice.  As we can see in the crude diagrams I've put together below this should then entwine itself with the exisiting vortex strengthening it therefore pulling more airflow through the Diffuser. 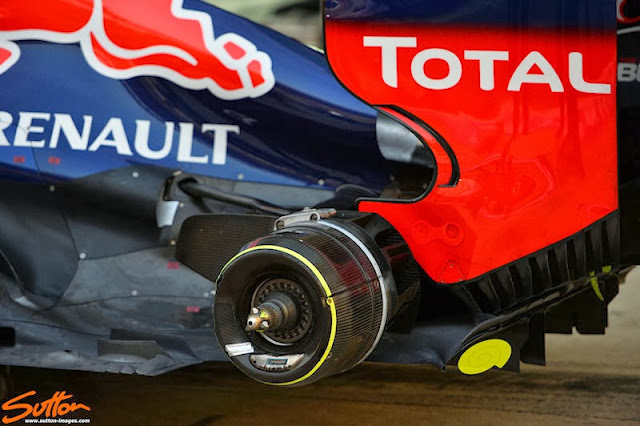 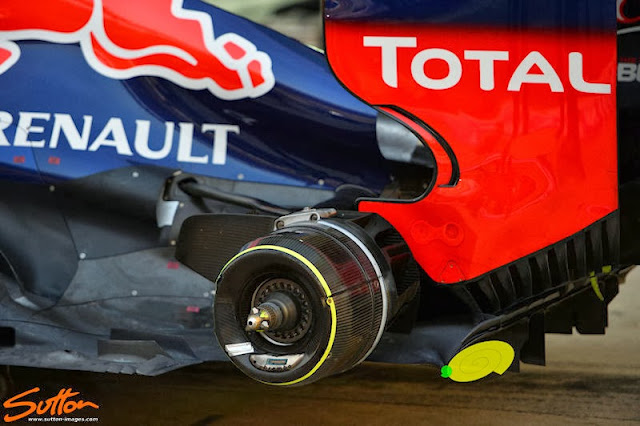 The Diffuser is a complex and hyper sensitive area of the car therefore requiring compromise to be made to entice the best from it.  From what I can see Red Bull have once again found another way to get the best from it's design from incremental changes. The question is, who can replicate it?
Tagged
Newer Post Older Post