Whilst their rivals Renault and Mercedes have released press images and sound recordings of their 2014 'power units' Ferrari have been a little coy in releasing information on theirs.

What little information we have been privy to is that it appears that Ferrari are a little wide of the mark in terms of their fuel consumption targets, even moving to have the 100KG limit per race lifted.  Renault were the largest opposer to a moving of the goalposts with an additional 20kg's of fuel touted as the figure requested by Ferrari.  It's widely regarded that Mercedes are also very marginal in their race simulations and so were sitting on the fence during discussions.

The following video surfaced today of what appears to be either a FXX or LaFerrari lapping the Fiorano test track with a distinctly un-Ferrari like turbo sound and certainly isn't representative of the V12 core engine either of the aforementioned usually run.

Is it the Formula One engine the team are due to run for 2014 being put through it's paces early on inside a test mule? I don't know and moreover probably not but it certainly asks the question, it is also worth noting that Ferrari are looking to install V6 Turbo engines in some of it's line up as a nod to the new F1 car (notably the 458)

It's certainly an interesting idea if Ferrari have decided to use LaFerrari as a mule especially as Rory Byrne helped design the carbon fibre chassis for the car that adds 1/5th of torsional rigidity over the Enzo and now resides on the Formula One team looking to return to winning ways.

I'm not suggesting that the use of the new F1 engine housed within a road going chassis would be an easy one to pull off either but it would certainly assist in allowing some actual track running prior to pre season testing which is still a few months away.  It would most certainly require the whole rear end of the F1 car's power unit, gearbox and suspension to be bolted to the monocoque too.

In terms of integration it's also worth noting that it would appear a roof snorkel has been mounted to the top of the car replicating the airbox position on an F1 car that doesn't usually appear on the FXX/LaFerrari. 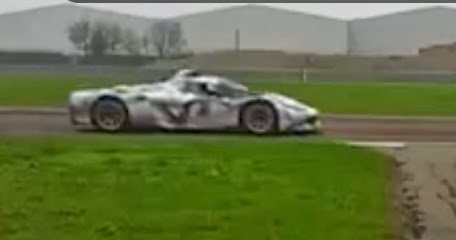 If this is Ferrari finding a way to test outside of the testing restrictions then fair play to them, it's an expensive operation that isn't representative in terms of loadings etc because they are running on track/road tyres rather than F1 style tyres.  However real world running in any form has to give some feedback that might not be attainable through simulation and bench testing.
Tagged
Newer Post Older Post