For 2014 the overall width of the Front Wing is set at 1650mm, 150mm narrower than the specification used since 2009. The idea is to rob the designers of vital frontal area, which will have an effect on both the drag and downforce generated. As we can see from the illustration above with only 75mm taken away it reduces both the physical length of the flaps but also effects the space available for the Cascades and Strakes.


The Front Wing essentially has two jobs, downforce generation and airflow management. Both of which are critical aspects of how the entire car is designed. It is easy to take a component like a Front Wing and in isolation be critical of it's design when compared with another teams. The problem though is the Front Wing is the first component to receive the airflow and therefore shapes the rest of the cars ethos. Bolting the RB9's Front Wing on the CT-03 isn't suddenly going to make it a second quicker and would more likely make it difficult to drive.


It's important that the Front Wing balances the downforce generated at the rear of the car to give good balance and therefore feedback to the driver. It must also provide the necessary airflow structures required by the rest of the car, not least the management of the airflow that spills off the front tyres and can effect airflow downstream. The loss of the outer 75mm of the Wing comes into play here as over the last 5 seasons the teams have harnessed the outer portion of the Wing to manipulate the airflow around the outer portion of the front tyres with a view of also altering the low pressure region behind it.


Many teams have followed a evolutionary methodology when it comes to their Endplate design from 1 car to the next and so it will be interesting to see what teams do with the Endplates moved inbound 75mm. Where some teams have sought to move airflow inbound from the footplate side and energize the airflow over and under the flaps they may now have to adopt the opposing design.


When the regulations were first announced questions were raised over whether teams would look to condition the airflow inbound and around the front tyre but in my opinion it's a no brainer that they will continue to send the airflow outbound. Of course this will require a slightly revised approach to how they turn this airflow but I believe we are already starting to see the signs of teams playing with these options. 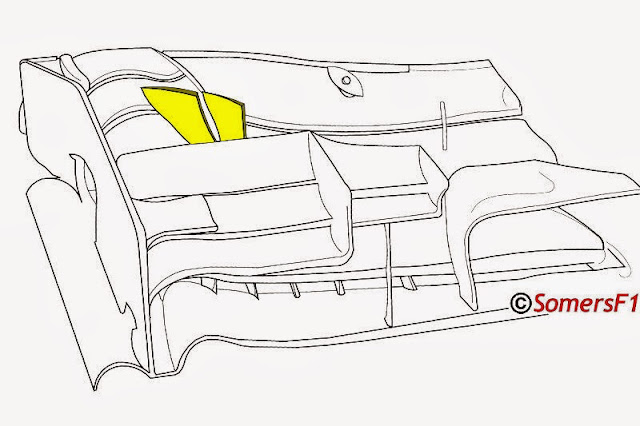 Above: Red Bull's use of the vertical guide strakes in the upper region of the flaps suggest they are trying to outwardly turn the airflow. Whilst investigating their 2014 options it may have become clear that adding these strakes to their current configuration could generate the desired effect. 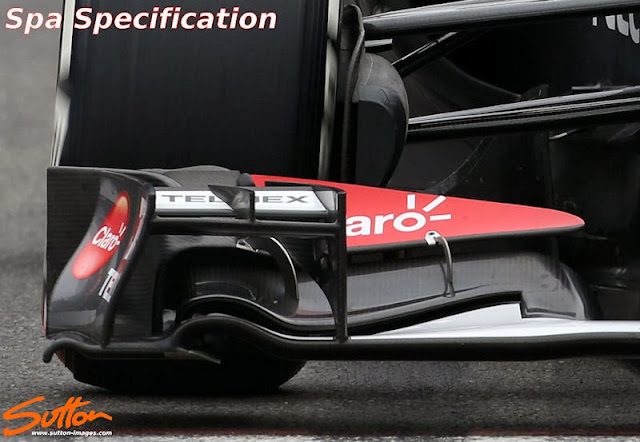 Above: For Spa and Monza, Sauber fitted their Front Wing with Cascades that outwardly turn the upper airflow around the front tyre

So in reality albeit with less width the Front Wings we have seen since 2009 will remain similar in concept.  Of course there will be a reduction in the level/number of flaps, cascades and strakes initially whilst the teams look at how best to navigate the airflow whilst also balancing it to the downforce achievable at the rear of the car.  Initially expect the complexity of the Front Wing to be less than what we are used to at the moment.

In the next part of this series I look at the changes around the nose of the car for 2014....