The Zoom charity auction, now in it's second year offers fans a rare glimpse into the mind set of those involved at the top echelons of Formula One.  Armed with a camera the stars from both behind the wheel, the pit lane and even Bernie himself allow us to look through the looking glass at their world.  The first auction saw images taken of everything from, the view from the cockpit or pitwall to a shot of Mark Webber's dogs.

Raising money for Great Ormond Street Hospital the auction of signed copies of these photographs gives people the chance to own these unique insights.  However if you don't fancy bidding against the star studded crowd that frequents the event you can purchase the accompanying book that's released after the event.  The last event saw the collation of the images into a well packaged 100+ page book, that also included a small editorial from the photographer on the context of the picture they shot. 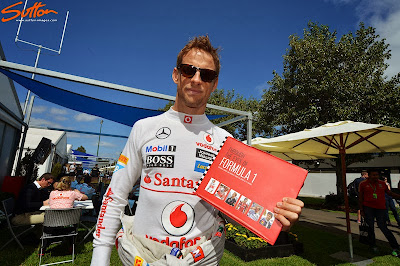 For the 2014 auction (7th February) not only will the images be available but event sponsor Nikon have provided 7 of their Coolpix S9500's, that have then been signed by legends past and present, including Damon Hill, Sir Jackie Stewart, Alain Prost, John Surtees, Jacques Villeneuve,  Kimi Raikkonen and Sebastian Vettel.  This years images include a raft of great action and artistic shots but perhaps none more iconic than Fernando Alonso taking a picture during the podium celebrations at Monza.

Once again all the images will be collated into a book that will be available for purchase after the event making it an ideal gift for the Formula One fan(s) in any household.
Tagged
Newer Post Older Post