The use of a Monkey Seat has been prevalent in Formula One for many years, it's normally associated with a high downforce configuration and popular belief is that it generates downforce. Although this is true to a small extent it's actual purpose is to assist the Rear Wing in creating downforce and aid in stability. In previous seasons an area 75mm either side of the car's centreline allowed for the use of these Winglets, this has been increased to 100mm in 2014 due to the exhaust now exiting into that region. 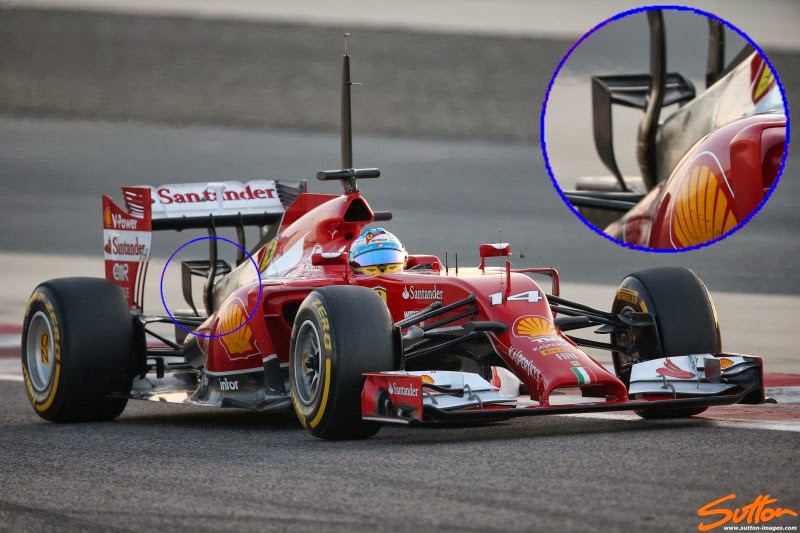 This effect is magnified by the placement of the exhaust as the energy dispatched by it can further enhance the Monkey Seats properties, helping to generate downforce and smooth the aerodynamic transitions that take place when the driver is off throttle or cornering. The addition of the Monkey Seat will usually be allied to a steeper angle of attack on the Rear Wing planes allowing them to generate more downforce without the angle becoming too severe for separation to occur. The downside is a proportionate amount of drag which will of course curtail top speed, this makes for careful planning by the team when choosing which setup to take. It will be interesting to see how this area evolves throughout the season as the placement/orientation/sizing of the Rear Wings support pylons ahead of the Winglet will also effect it's performance, in the case of Ferrari the team have mounted their Winglet on top of the crash structure and we find it bends outwards to meet with the full 200mm width.  The Winglet / Monkey Seat was not used through the whole of the test but did find it's way onto the car whilst the team tested several configurations.
Tagged
Newer Post Older Post