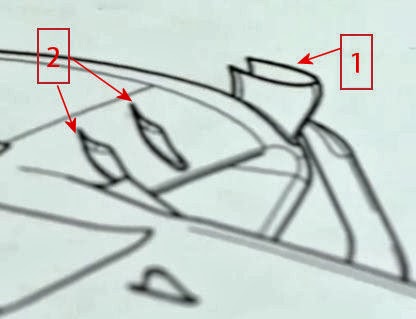 The McLaren MP4-29 shown at the teams launch differed in Sidepod specification to the one shown in the video's that accompanied the launch (See above). From this it was fairly safe to assume that the physical item was a placeholder and the components used at the first test would actually be representative of the true specification. When the car arrived in Jerez it was clear to see that the items missing from the launch were indeed on the MP4-29. 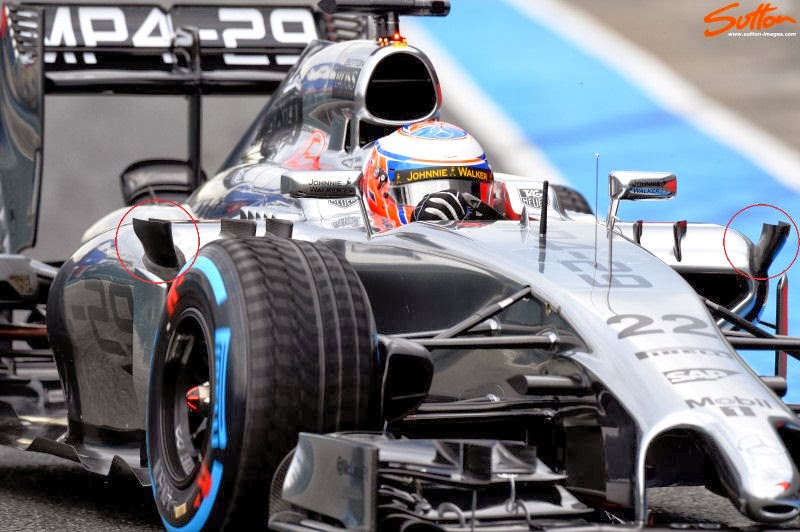 Even though the Vortex Generators adorning the top of the Sidepod are interesting, as it alludes to the fact that McLaren are using the top surface of the Sidepod aggressively, the outbound 'Chimneys' are more intriguing. Cooling as we know is an important factor this season not only because of the thermal demands of the engine, but because of the increased form drag that is associated with additional cooling exits. Therefore you'd immediately question why McLaren would want to place a cooling exit in such a critical area.

When you have a problem (like cooling in 2014), sometimes you have to use the disadvantage to leverage an overall advantage. McLaren's use of the Horseshoe Chimney on the edge of the Sidepod is likely a carry over from a lesson learnt by Matt Morris. The ex Sauber man joined McLaren at just the right time to have some influence over the direction taken with the MP4-29 (A similar design concept was used at Sauber in 2011 on their C30). Above: Please excuse the rudimentary diagram as it is only meant as a guide, there are many flow regimes combining in this area and so this is just meant as a small guide to the immediate area.

The 'Chimneys' themselves are using the hot airflow dispatched from the sidepods (Red) to invoke an aerodynamic chain reaction, situated on the shoulder of the Sidepod they are in an area that is affected by different flow regimes. One of the largest influences ahead of the device is the front tyre, of which the 'Chimneys' are looking to protect and enhance the airflow directed at the Sidepod from. I'd suspect that the intention is for the low energy/pressure airflow dispatched from the chimneys to entwine with the higher pressure energy making it's way around the sidepod (Yellow), creating a sort of air skirt along the periphery of the top edge of the sidepod. 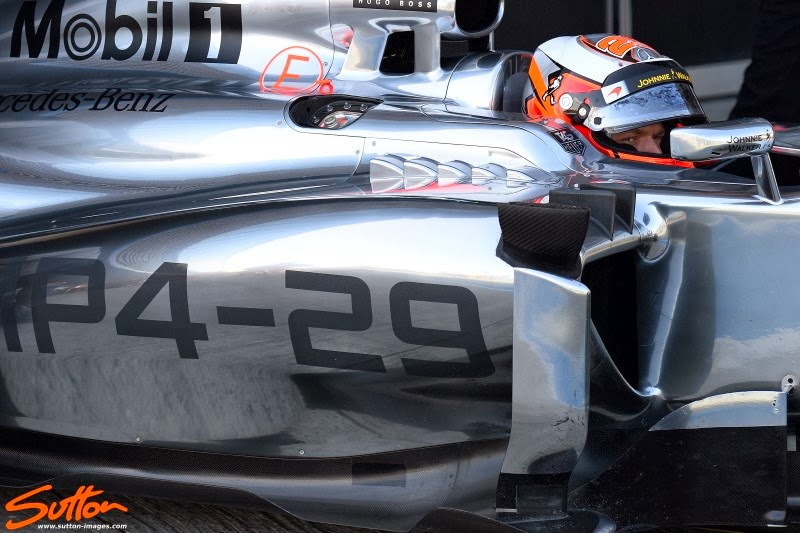 The use of the Chimney's has also led to the shortening of the sidepod airflow conditioner's ahead of them who's job it normally is to protect that section of the sidepod from the influence of the tyres wake (especially in yaw). Their job is now aimed squarely at protecting the airflow structure designed to navigate around the sidepods undercut to the rear of the car.

This solution when considered just in terms of the Chimney's may not be ideal but when you stand back and look at both the thermal considerations and the overall aerodynamic structures it neatly ties up several problems.
Tagged
Newer Post Older Post