The Sauber team have already highlighted the fact that they plan to introduce a large upgrade package for the 2nd pre-season test in Bahrain. I won't go as far to say that the C33 looked basic but at Jerez the car did look a little sparse when compared to it's predecessor and their opposition. 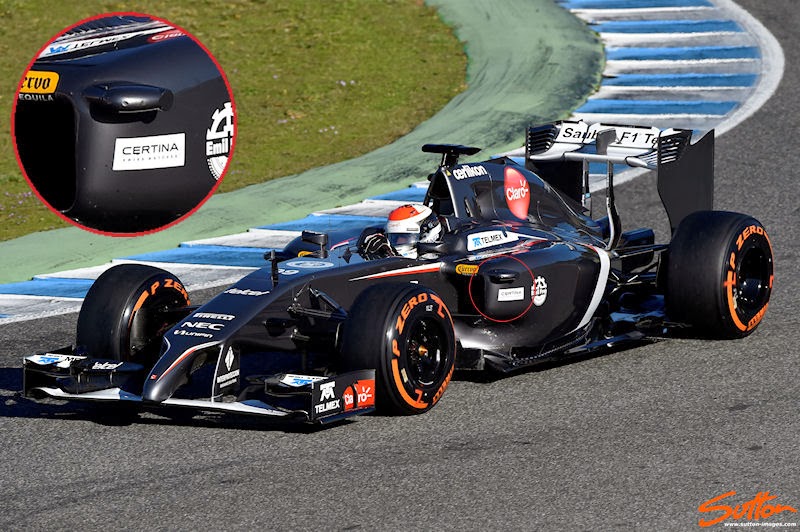 The thing that sprang out for me was the lack of sidepod airflow conditioners, whilst the shoulders of the sidepods were fitted with a small bullet shaped appendage (Inset). The C33's sidepod profile is atypical from the rest of the field with a very square outer edge providing a boxy outline to the C33's sidepod. That being said the sidepod still features a decent inlet undercut allowing airflow to move around the sidepod to the rear of the floor into the coke bottle region. The flat side surface of the sidepod is conducive to isolating the flow below it and encouraging flow to stay within the boundary of the top surface of the Sidepod. The 'Shoulder Bullet' meanwhile will aid in this regime, deflecting the airflow dispatched by the front tyres and utilising it longitudinally along the sidepod. At the rear of the bullet we find a flattened section that seemingly houses a detachable panel. This may simply be a connecting element the team will use to affix an Airflow Conditioner to in their upgrade package, or it's viable it could be uncovered and used as a cooling chimney, releasing internal airflow from the sidepod (as previously used by the team on the C30 and by McLaren this season on the MP4-29)