McLaren's electronics arm has been supplying Formula One teams with several components specified by the FIA for some time now. 2014 obviously entails a raft of new challenges for which a new SECU (Standard Electronic Control Unit) had to be specified, this will monitor and control all of the new parameters required for the new powerunits.

McLaren have been busy readying another device, the PCD-8D is an all new cockpit display that is capable of showing many more parameters to the driver. A little larger and heavier (230g rather than 130g) than it's predecessor the new component is an option that won't be taken up by all teams.

The larger display is able to convey more on one screen than it's predecessor, meaning the driver doesn't have to cycle through a series of button presses as often. 100 pages of customizable information can be utilised on the PCU-8D opening up more possibilities for the driver in terms of the availability of information and how it's presented. (I've often wondered if the static red display colour of the PCU-6D's digits are an annoyance to some drivers for arguments sake). The new display also opens up the option to display certain criteria in a graphical format that is otherwise made numerical on the older display. Furthermore CAN messages can trigger warning screens enabling the driver to back off before a catastrophic failure.

The centralised 15 led rev display is retained at the top of the unit along with the placement of the warning flag leds either side of the display.

It's questionable that in a year where change is so prevalent in F1 as to whether changing the drivers interface is a step too far and so some teams or drivers will continue to use the PCU-6D.   Consider it like upgrading from one Playstation or Xbox to the latest gen though, with more power you need more control and so some drivers will relish it.  Perhaps this is where rookies like Magnussen and Kyvat have an advantage too, not only are they the next generation but are coming into Formula One at a stage when the face of the sports technology is changing and so starting with a blank canvas/fresh perspective could help them no end.

Six of the eleven teams have thus far appeared with PCU-8D units mounted in their steering wheels with Sauber the only team I've been unable to ascertain which version they're using (although with both the other Ferrari powered cars using the new display I'd suggest they're using it too).  I've now found pictoral evidence that Sauber are using the PCU-8D.  In the slideshow below we can see that Ferrari, Mercedes, McLaren, Toro Rosso and Marussia all have the PCU-8D. 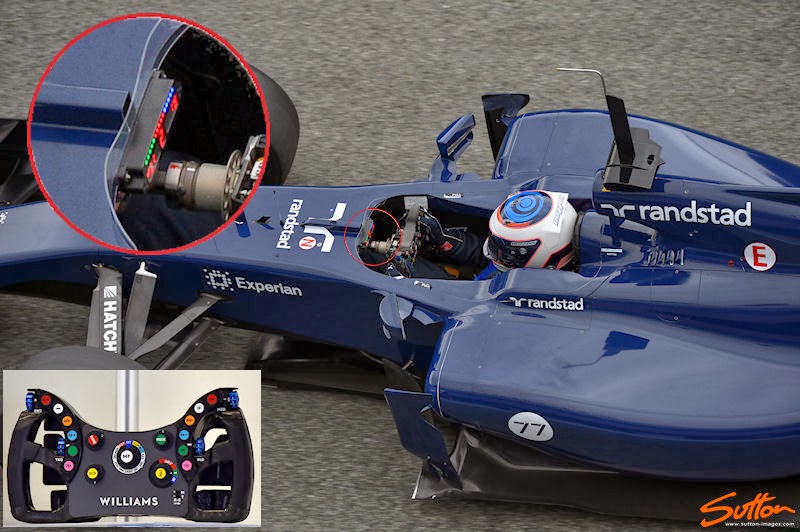 I have requested some more information and if I'm really lucky a hands on with one of the PCU-8D's from MES which I'll share either via the blog and YouTube if they come through.  In the meantime though Peter Windsor has been lucky enough to get his hands on one....