McLaren were criticised in 2013 for their lack of development on their Front Wing with the MP4-28 featuring only an evolutionary variant from the previous few seasons. With other teams seemingly using outwardly more complex wings with multiple ties and deltoid shapes it seemed that the Woking based outfit had been left a little behind. McLaren of course responded but the Wing still lacked the level of complexity of say a Red Bull or Ferrari, however with development curtailed early on last year in order to concentrate on this years car it was expected the team would respond with something a little more radical.

It's clear that the team have clearly enhanced this area of the car but they are staying fairly close to their ethos at the same time. The thicker profiled 3 flap arrangement (mainplane and two upper flaps) remains but with the mainplane now sliced into 2 sections and both the flaps having slots added at the outer sections the wing bears a much closer resemblance to Red Bull or Ferrari etc. The Cascades used by McLaren are orientated at pushing airflow up and around the top corner of the tyre whilst the Endplates attachment only on the footplate alongside the mainplane, means airflow aft of this can converge with the elongated vortice that's being generated with the arc'd outer section of the flaps. 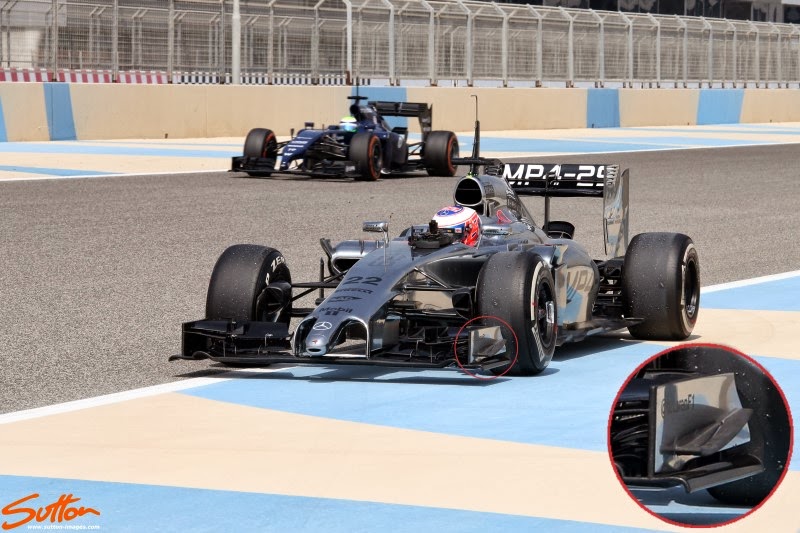 Something that went un-noticed by me, (until I checked back) on the final day of the last test and once again at this test the team have also added a vane that protrudes from the endplate, over hanging the footplate. A similar vane can be found on the WO5 but it's firstly much larger on the McLaren, has a slot placed along it's length but is also placed in the opposite diagonal direction which will therefore affect it's pressure gradient differently. Although they have the their differences both teams vanes look to do a similar thing, create a pressure gradient. The slot placed in the vane helps to create a vortex that pulls on the airflow structures inbound and will aid in the turning of the airflow outbound of the tyre. These flow structures are crucial as they will once again impact the car further downstream as the wheel wake tries to impinge on the floor performance.
Tagged
Newer Post Older Post