Mercedes had the luxury of bringing aerodynamic refining parts to the last test with the team having covered significant ground in the previous two tests. 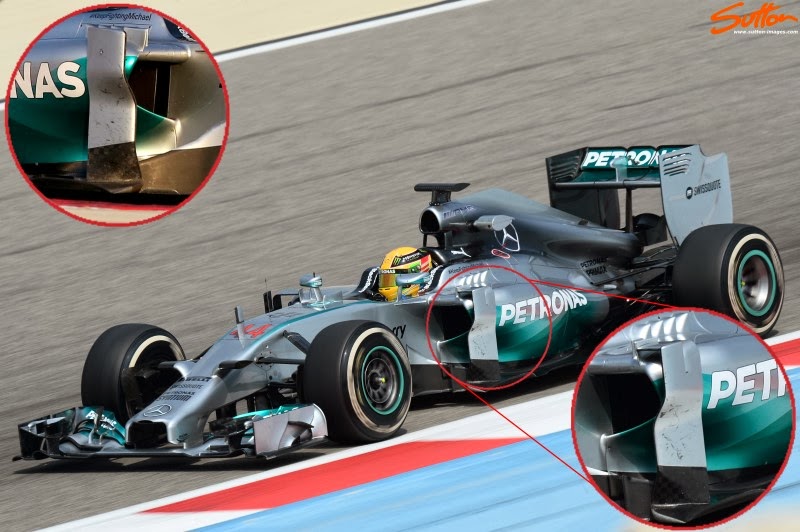 As part of these refinements we find a new set of Airflow Conditioners alongside the Sidepods of the W05 (old version in top left inset). These more complex conditioners are split into two with the forward element retaining it's vertical stance whilst the rearward section arc's over to reach the Sidepod's shoulder / outbound vertical vortex generator. The creation of a two part element has already been done by several of the teams rivals and so it's no surprise that the team has at least evaluated the part for their own challenger.

That area of the car is quite sensitive especially in yaw, with tyre wake impacting the flow both over and around the Sidepod. Furthermore as the teams try to use the Sidepod's large aerodynamic surface to affect the performance of the car it's crucial to keep it operating in as wide a performance window as possible (over a wide speed threshold). The splitting of the conditioner into two elements will help to both control the front tyre wake and it's impact on the airflow around the Sidepod and create vortices that will both manage the impingement of airflow further downstream and increase the efficiency of the airflow structures in that region.
Tagged
Newer Post Older Post