The team from Milton Keynes that dominated all but the initial phase of the last regulation phase (arguably better than BrawnGP once their car had a Double Deck Diffuser installed) is struggling to convince even themselves they can take the chequered flag in Melbourne, let alone be competitive. A list longer than my body, let alone my arm awaits the technical team as they re-assemble post test.

There seems to be several key issues at play along with some rather confusing ones to talk about in regards to both the RB10 and the teams approach pre-season.

It's only a small point, but one worth making, the RB10 used at all three tests thus far would be illegal if it were to start the race in Melbourne. 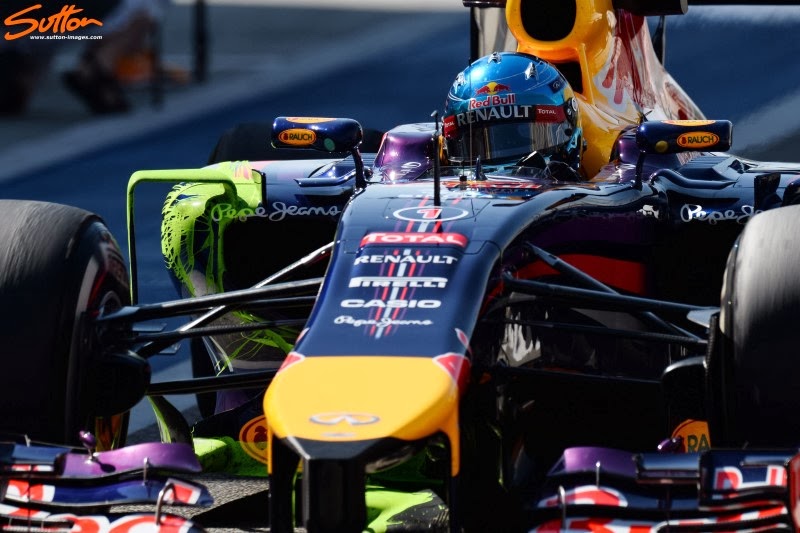 Since the RB10 was unveiled it has been devoid of the FOM camera's on the side of nosecone, now this may seem like a trivial matter but it points to the fact that the RB10 isn't being shown in a competitive guise. Can we therefore infer that Red Bull have another nose design that they aren't willing to show to their competitors until the very last moment? Or are they being considered such low performance differentiators that they'll just place them on the side of the nosecone come Melbourne? Lest we forget that Red Bull have been a team over the last few seasons to have leveraged these items for an aerodynamic advantage like no other. Placing the camera's in several locations to best suit the circuit demands (Nose tip: hammerhead position, Between the front wing pylons: taking advantage of the restricted central section of the mainplane and lastly in the most neutral position on the side of the nose) and moving the airflow in different ways. 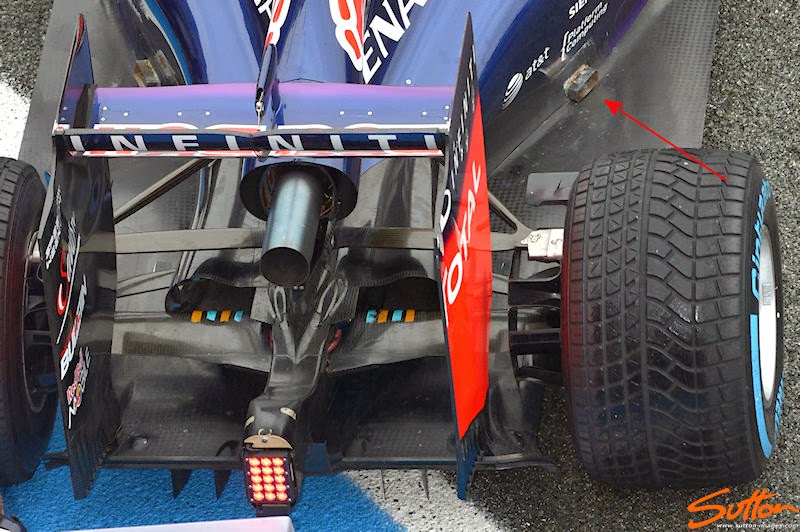 When I first analysed the RB10 I remarked at how basic the rear end of the car seemed in comparison to some of the teams opposition, expecting the team to revise the concept throughout pre-season testing. This however never came to fruition with the team doing some rudimentary cut away and piping work on the original bodywork to quell the thermal issues caused by such tight packaging. 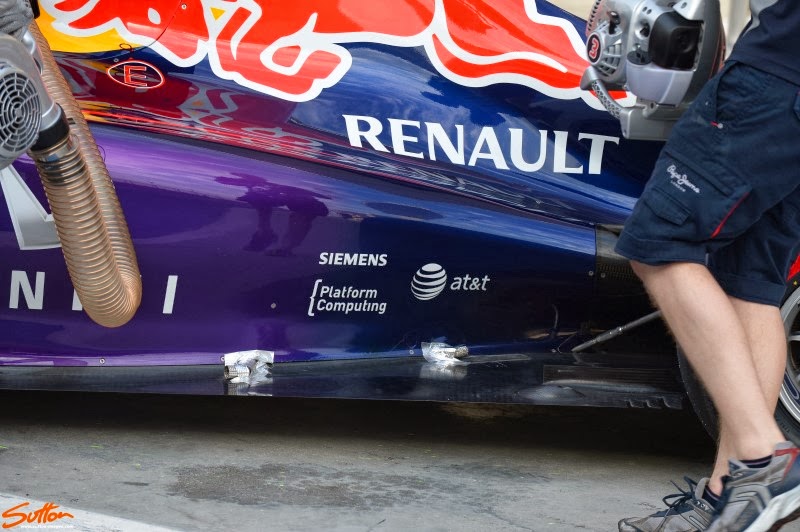 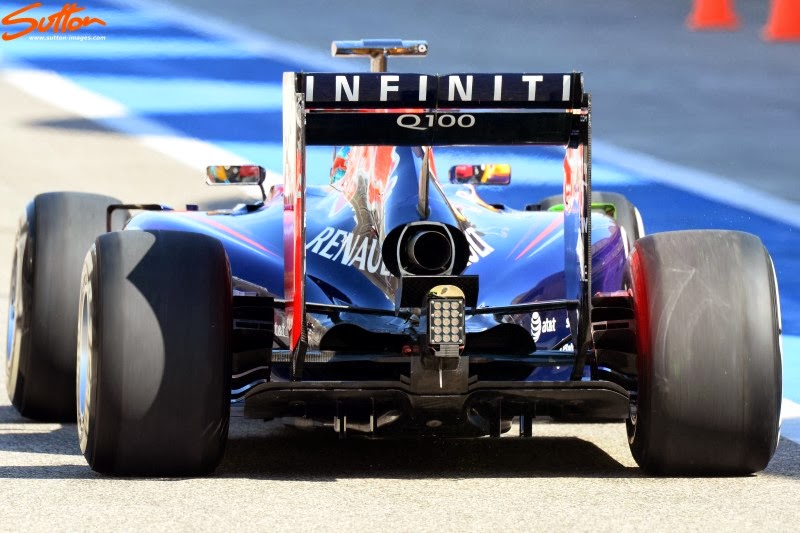 The downforce losses associated with the rule changes has led to many teams taking a sledge hammer to a nail whilst Red Bull appear to be using a tack hammer. Whilst the other teams are desperately proliferating the area above the floor with aero trinkets aimed at mitigating the loss of the Beam Wing, Red Bull have a relatively sparse floor etc. What is obvious though is that everything has its place, with the shrouded halfshafts within the lower wishbone placed directly behind the lower cooling outlet. Above these outlets we find the extremely shrink wrapped section of bodywork 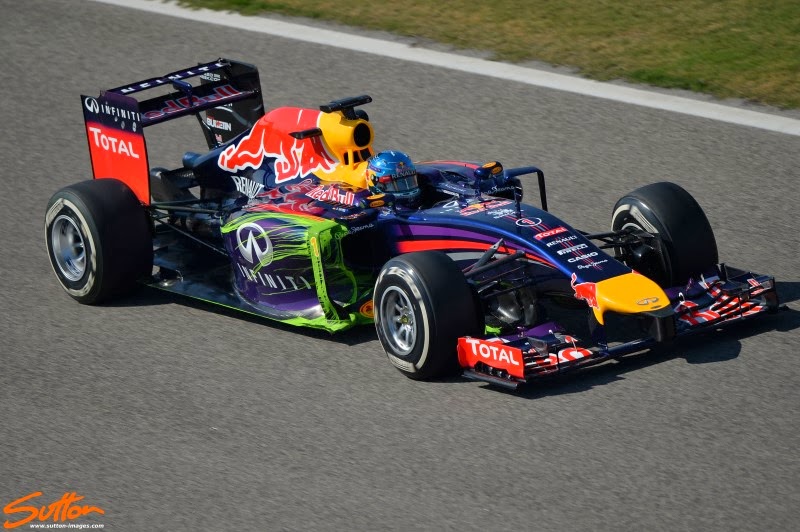 converging the airflow from the upper surface of the Sidepods and focusing it on manipulating the exhaust plume above it. The Rear Wing is devoid of leading edge tyre wake slots as seen on the RB9 and most of the 2014 field (with some teams increasing to two per endplates) and seemingly points at the team concentrating their efforts at outwashing the rear airflow and entwining it with the low pressure behind the rear tyres. This less complex rear end will of course likely lead to less drag and could be one of the reasons why the team have taken the strange decision of not running louvres in the upper quadrant of the Endplates. Usually used to reduce the pressure gradient at the outer portion of the wing and therefore reduce drag they have become a go to for all the teams and so it seems strange to see Endplates without them now (apart from low angles of attack setup such as Monza).

We all know that the new powerunits are insanely complex and that due to the reduction in engine capacity (2400cc V8 to 1600cc V6), inclusion of a turbocharger and the increase in performance demand from two energy recovery systems that the car's thermal footprint has increased. Cooling therefore has become a massive priority to the teams and this comes in the form of several heat exchangers too: The ICE is cooled by the conventional radiator(s) whilst the inlet charge (turbo) is taken care of by the intercooler(s), there is then a plethora of oil coolers taking care of the ICE, Turbo and Gearbox. The quantity, sizing and orientation of all these heat exchangers have an impact on the car's weight and design. Having seen the layout being utilised by Toro Rosso and Lotus (ICE radiators, Intercoolers and Oil Coolers mounted in both sidepods) it's clear that Renault have designed their Turbo to receive cooled air from two sources (an intercooler in either Sidepod) whilst the extremely tight packaging displayed by the RB10 alludes to something different, with the team likely following their usually extremely marginal arrangement.
I'd suspect the team have tried to use an asymmetric layout with an Intercooler placed in one Sidepod and the ICE radiator in the other, with the core thickness of the intercooler being substantially larger than it's radiator counterpart it would allow for the stacking of oil radiators to be done with the ICE radiator, retaining uniform packaging. In terms of cooling this perhaps isn't too much of an issue although the pipework may cause somewhat of a conundrum when returning the charge back to the turbo.

One of the key components of the changes for 2014 and that will feature heavily in both team and driver excuses, whilst becoming a firm fixture in commentary is: Brake-by-wire. The brake-by-wire system is a legacy of the increased performance being extrapolated from the MGU-K this season and puts a demand on both the engineers and drivers in getting it right.

Brake-by-wire put simply is an electronic system that sits on top of the hydraulic braking system in order to regulate the amount of braking done by both the ERS/MGU-K and the standard mechanical braking system. This is due to the fact that the MGU-K must now harvest 5 times the amount of energy per lap than it's KERS predecessor (2mj's rather than 400kj's). This additional braking force from the MGU-K requires much more focus in terms of balancing the front to rear brake bias and so this where the electronics step in. The driver will still select the amount of bias he requires for each corner, but rather than using the old mechanical setup that you're used to seeing them reach for on the left hand side of the cockpit, they will instead make changes via the steering wheel (additional paddles or buttons). These changes are metered by the amount of MGU-K harvesting happening at that given moment, allied to the amount of pressure applied to the brake pedal.

This requires a level of compliance between the driver and the software (which has been pre-written by the teams engineers), at this stage many of the drivers are still finding problems with this and are complaining that they have a lack of feel. Red Bull are believed to be one of the teams having issues with their code and have likely been trying to push the performance envelope too early.

In terms of performance gains from one team to another who utilise the same powerunit there isn't perhaps huge scope in 2014, with homologation encompassing almost the whole powerunit. One area that was left open for inter powerunit gains however was the Energy Store and this is apparently where Red Bull tried to steal a march on their competitors but appear to have fell a little short. As we know over the last few seasons Red Bull have been plagued by problems associated with KERS, with the blame largely falling on Adrian Newey's shoulders for the extreme packaging he requires for aero. For the past few seasons the team have run with a split system that required a battery pack placed in the sidepod and a set of supercapacitors placed around the gearbox casing. The team did this not only for performance gains within the KERS but also to assist in the cooling and overall packaging of the system.

For 2014 however the ES has a prescribed position under the driver and will likely be encased by the fuel cell too. To continue to gain an advantage over their fellow Renault competitors and they hoped over the rest of the field the boys from Milton Keynes had decided to invest in their own battery technology. This appears to have been one of the teams biggest faux pa's and has led to the low mileage during testing and numerous stoppages throughout. When installed and allied to the Renault unit they've had a difference of opinion, this has a massive effect as not only does it affect the physical installation of the ES and associated cabling. It also has an effect on the software code that has been written, especially the way all the sub systems (Turbo, MGU-H and MGU-K) have to work in perfect harmony this season.

For the final pre-season test in Bahrain it appears that Red Bull finally bit the bullet hard and switched to the Renault ES as used by Lotus, Toro Rosso and Caterham already and led to the increase in mileage. The problems associated with this will have led to compromises in installation and packaging though that will take some time to rectify and will likely never be quite right. Furthermore the code that had been previously written by the team to control the turbo, MGU-H, MGU-K and brake-by-wire systems will largely be classed as junk and have to be re-written. “Why so different?” I hear you say, well it was to do with the way the original Red Bull ES was able to receive, store and transfer the energy and so intrinsically led to different energy pathways and a possible performance advantage that is lost now they've had to revert to Renaults.

Red Bull are clearly several steps behind where they wanted to be but as they've proved in the past, they are more than capable of overcoming hurdles put up in front of them.  With so much reliable and consistent running displayed by their opponents however I wouldn't expect them to be close in the first part of the season and they may be rubbing their hands together over the prospect of a double points finish at the final race.
Tagged
Newer Post Older Post