The diffuser has been an area exploited by the Red Bull team over recent seasons with them exploring the use of blowing it's outer edges (2010-11 Exhaust Blown Diffuser and 2012-13 'Coanda' exhausts). With this practice curtailed in 2014 by the centreline placement of a single exhaust outlet it's no surprise to see changes in this area.

For Melbourne the team have revised the inner vertical strakes, adding slots to the lower section of the elements, the strakes also feature a more aggressive curvature ahead of the slots which will manipulate the way in which the air flows around them. The strakes purpose is to aid the diffuser in yaw, creating pockets for the airflow to collate, maximizing the performance of the diffuser in its entirety. The slots will allow airflow to bleed off under rotation, further maximizing the pressure gradients at play. 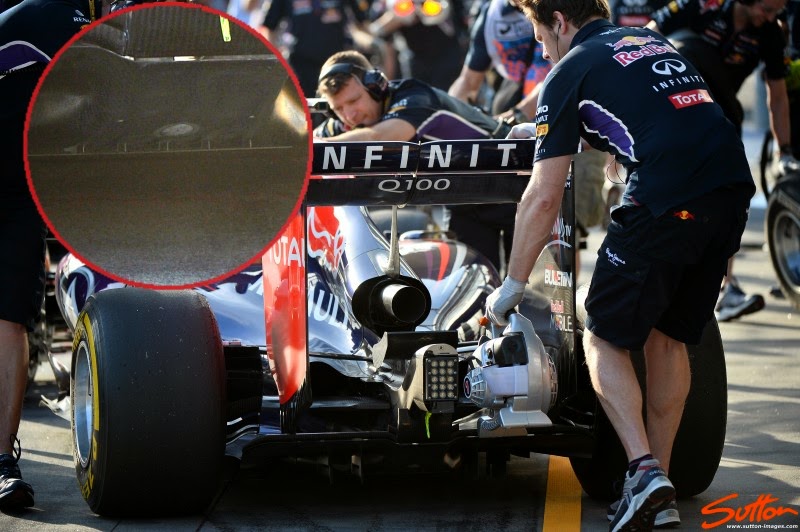 During pre-season the team have also been utilising some small Vortex Generators at the transition between the flat section of floor that houses the plank and the upward curvature of the Diffuser.  These were used in Melbourne and are a likely response to the loss of the starter motor hole as a way of injecting airflow into the central portion of the Diffuser.  The Vortex Generators will aid in overcoming the sharp transitional incline, allowing the airflow to operate more effectively over a wider speed threshold.