Red Bull Racing arrived at Melbourne on the back foot, problems during the pre-season tests curtailed the mileage covered by the team, scuppering their assessment of aerodynamic solutions.

One of the standout exclusions by the team during pre-season testing was the placement of the FOM camera's on the side of the nose. Several conclusions had been drawn but although I'd thought about what we now see as Red Bull's plan I scoffed at the morality of it. However as we have seen over the years if the rules are ambiguous the teams will take advantage. The regulations that pertain to the new nose camera positions were to create further aero neutrality than had been seen in recent years, with teams using the camera housings over the last few seasons to make gains.

For instance teams would mount the camera housings in between the pylons and behind the mainplanes neutral centre section. This is an area of the car that the FIA have desperately tried to limit the aerodynamic capability of due to the net effect that can be seen downstream at the diffuser. Placing the cameras in a certain way offered some teams an advantage. Red Bull played with the housings in several positions throughout the last ruleset with the aforementioned one of these an option, whilst the 'hammerhead' position (placed either side of the noses tip) was another favourite. This not only created a desirable aero structure off their outer edge but also created a little more front end downforce with which to balance the car. 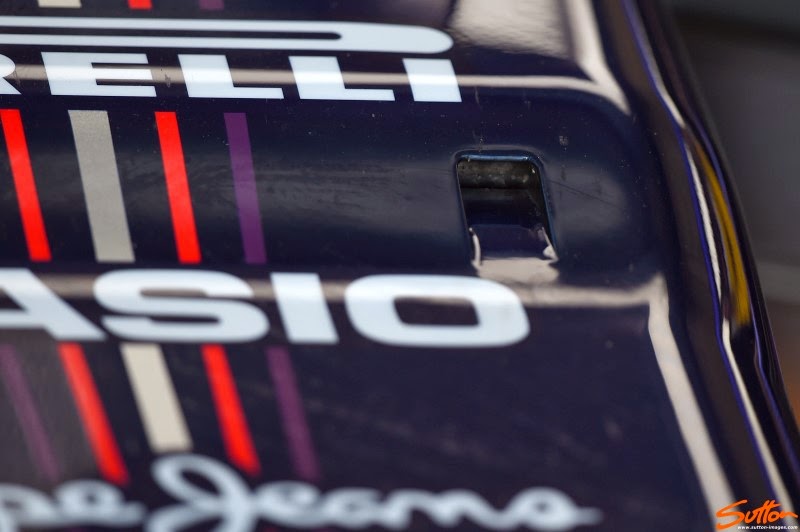 As we have seen in Melbourne, Red Bull have chosen to run their cameras mounted within the nose, which for many will be seen as a clear smack in the face to the regulations. However I can confirm the legality of what has been done by the team as 20.3.1 (technical regulations) states:

Referring to Drawing 6, all cars must carry (i) a camera in position 4 and (ii) a camera or camera housing in positions 2 (both sides), 3 and either 1 or 5.

Article 20.3.4 takes care of the new dimensional constraints designed to limit the placing of the cameras:
20.3.4 When viewed from the side of the car, the entire camera (or dummy camera) in position 2 shown in Drawing 6 must lie within a box formed by two vertical lines 150mm and 450mm
forward of the front wheel centre line and two horizontal lines 325mm and 525mm above the
reference plane.

What this article fails to take into account is the positioning of the camera(s) from the cars centreline and therefore allows the placement of the cameras within the nose itself.

I guess you're wondering why only one camera has been made visible by the team and I refer you to the rest of article 20.3.4:

The opening in front of the left hand camera therefore brings the team inline with this regulation, whilst the regulations mean the right hand side can be covered minimising any additional aero deficiencies.

Lastly I suspect you're wondering how it's possible for the team to have a hole placed in this position on the nose, this falls under the regulations pertaining to vanity panels (a remnant of the 2013 regulations to hide step noses). You'll note a small bump has appeared on the RB10's nose just ahead of the camera peephole and this is due to the inclusion of the vanity panel. The bump isn't a dramatic aerodynamic issue for Red Bull due to their inclusion of the rear facing 'S' duct which will aid in the re-attachment of the airflow as it passes over the bodywork (Coanda effect).

Whilst it would be easy to imagine that the team would have to place the entire camera housing within the nose, all they need do is place the camera's within, this will also have a marginal weight saving (1.2kgs in total or 0.6kgs per housing).

I'm quite sure some of the other teams will be looking at this as a means of disposing of their own camera housings but this will rely heavily on if they are trying to leverage an aerodynamic advantage from their current position (Mercedes and Ferrari).