As we have seen throughout pre-season testing the teams have already assessed a multitude of options to keep their cars cool. The problem however is as soon as you start opening up bodywork it has an impact on other aero structures, usually leading to a rise in drag due to the way the hot, slower airflow interacts with the flow regimes. With efficiency always being a prime concern McLaren arrived in Malaysia with a new sidepod and floor arrangement that is reminiscent of the one trialled by Lotus in Melbourne. 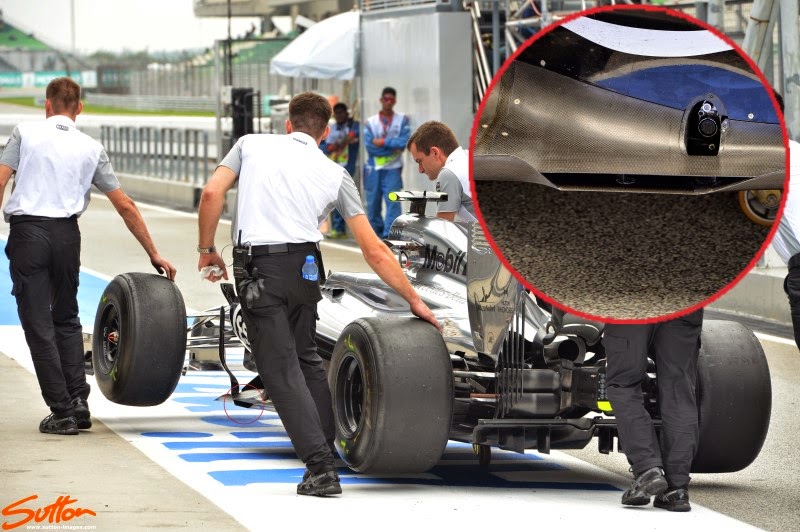 Unlike Lotus though, McLaren have the ducts present on both sides of the car dispatching hot air from the car into a region that it can be better utilised and re-purposed. The duct is formed by an additional section of bodywork that sits above the floor which connects to the Sidepod, this duct resides between the two floor scrolls which will undoubtedly work in unison with the duct to re-energise the airflow. Meanwhile the entwining of a vortex in this region in itself will create some drag, the upshot however is that the vortex could help to protect the floor from the wake produced by the front tyre.

The increase in heat being generated by this years powerunits is predominantly due to the increase in electrical energy transfer. KERS capacity was 400kj per lap whilst the ERS can store upto 4mj's per lap, energy is harvested in AC (alternating current) but to be stored needs to be converted to DC (direct current). A byproduct of this exchange is the generation of heat and is likely what McLaren are looking to alleviate with these ducts.