There are many battles going on up and down the field in Formula One and Marussia are one such team busy making an impression on their closest rival Caterham.  At one stage the battle for supremacy between the two 'new' teams had swung in Caterhams favor, having established relationships with both Renault and Red Bull that allowed them to concentrate on other areas of the cars design.  However with Marussia now enjoying a technical partnership with Ferrari for their powerunit and gearbox it's allowed them to express themselves on the rest of the car, focusing their efforts on delivering performance, rather than micro managing issues.

For those of you that aren't aware Marussia battled on to the very end of the V8 era utilising the Cosworth V8 only taking on KERS for their 2013 challenger (MR02) utilizing Williams technology.  The problem for Marussia was they were the last Cosworth team standing, with HRT folding and Caterham moving over to Renault power it left the team shouldering the bulk of the R&D.  Although minuet engine data isn't shared between teams things like off throttle blowing and the 'coanda effect' exhausts development was driven en-mass by all the teams using the same engines.  I'm not saying that Cosworth simply gave up the goose but with only one team, development is always going to be a little behind the curve (unless you have wads of money to throw at something).

Marussia's use of the Ferrari products has therefore yielded advantages in terms of time spent developing mechanical components, affording them more time to concentrate on setup and aero performance.

For Barcelona the team arrived with a revised nosecone, sporting an elongated 'finger' extension that terminated under the nose.  Lest we forget that although a new car is designed from the floor up, the experience garnered from its predecessor will always have an impact on how the car is laid out.  Marussia therefore have tended to follow a path which dictated a lower nose and so I was initially surprised to see that the team had opted for the 'finger' extension nosecone.  However in order to enable more scope and certainly the ability to get more flow to the rear of the car (read as downforce) the team took the option of running with the higher nose.  The extension of the 'finger' section will of course reduce the mass flow available under the nose, but this isn't always a bad thing in all conditions.  We have to remember that airflow has to be conditioned differently at different speeds and so although this option may not give peak performance it may offer better efficiency at all speeds. 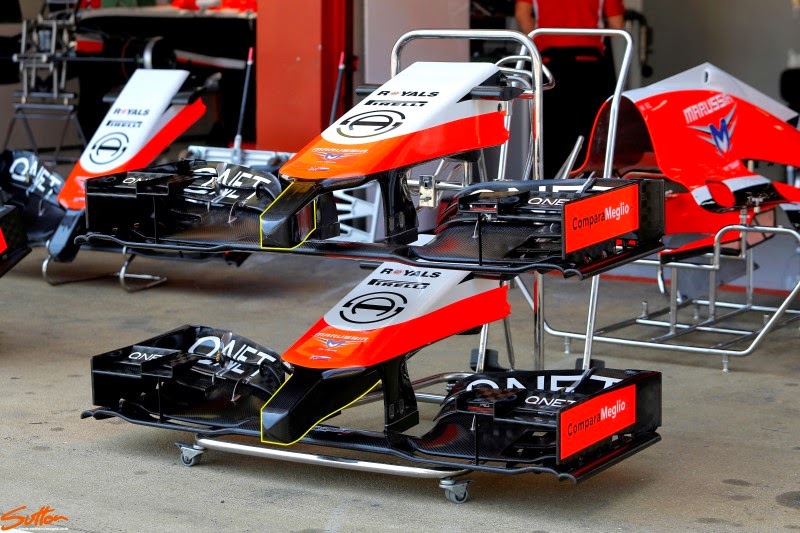 Above: Both the old nose (top) and new (bottom) shows the difference between the length of the 'finger' extension