Ferrari have started their 2014 campaign much the way they finished last season, the third best team and although Red Bull and Mercedes may have swapped places the Tifosi won't be best pleased with the scarlet outfit that promised better for this season.

In Barcelona, Ferrari had arrived with plenty of new parts to assess, what they can take solace in, is the fact that the parts they bought haven't ended up back in the parts bin like those they bought to many races last season. This further proves that the correlation between what the team is seeing in CFD and the Wind Tunnel is now as it should be with parts bearing fruit when presented on the car at the circuit.

For Barcelona the team revised their Rear Wing configuration taking on board some of the design considerations seen by other teams this season, whilst still continuing to break ground themselves. 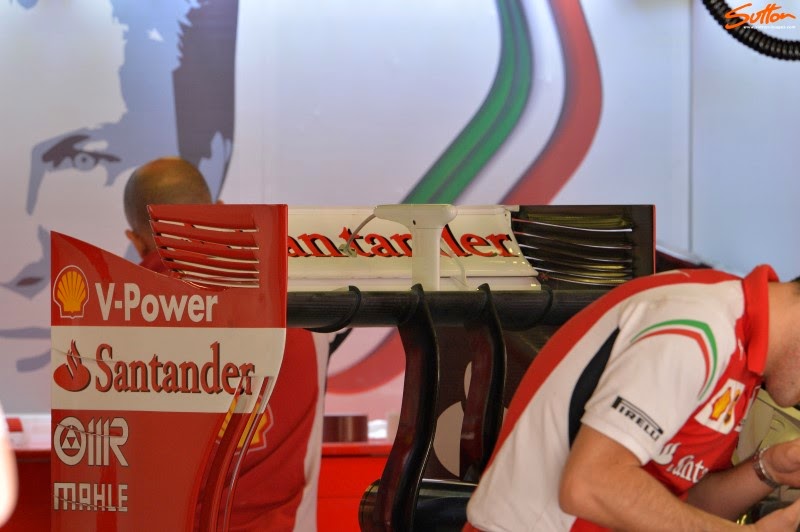 Instead of the twin rear wing support pylons previously employed by the team (above), Ferrari installed a singular centre line pylon in the inverted Y configuration (Y-Lon) as we first saw from McLaren/Marussia (below). The configuration has since been copied in one guise or another by Red Bull and Toro Rosso and now Ferrari. The inverted Y's sole purpose is not just to surround the exhaust but to act like an aspirator, using the exhaust to pull the airflow over and through the Sidepods, shaping/tailoring the inverted Y therefore is critical to each teams configuration. 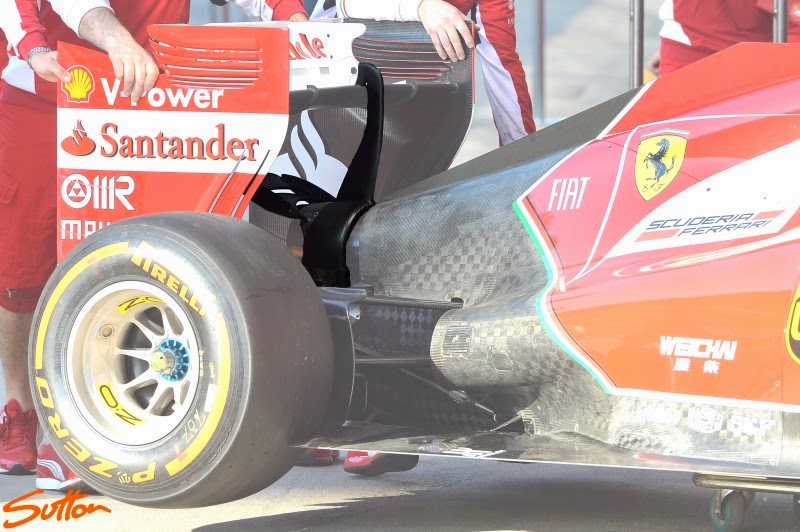 Attached to the inverted Y section that surrounds the exhaust we also find a Y100 Winglet / Monkey Seat reminiscent of the McLaren solution. As always the idea of this winglet is to promote the interaction of flow structures between the diffuser and rear wing flaps, creating a more unified/balanced structure. The shape of the winglet is designed to upwash the airflow being drawn through the Y section by the exhaust and upwash it.

Ferrari have gone the extra mile on how their new pylon mounts to the Rear Wing, understanding that simply mounting the pylon to the underside of the mainplane can cause disturbance and separation that leads to the wing stalling (especially in Yaw). To minmise this impact Ferrari have pulled the pylon forward, to perhaps the maximum allowed position given the ban on bodywork ahead of the rear wing that prohibits systems like the F-Duct. The pylon therefore mounts on the top of the mainplane adding rigidity but not drastically interfering with the airflow, much like the swan neck style mounts used in WEC. This means that the rear wings mainplane has also been changed with the mainplanes leading edge previously upturned to mitigate the use of the two pylons now reduced in height with the exception of the area around the central pylon. 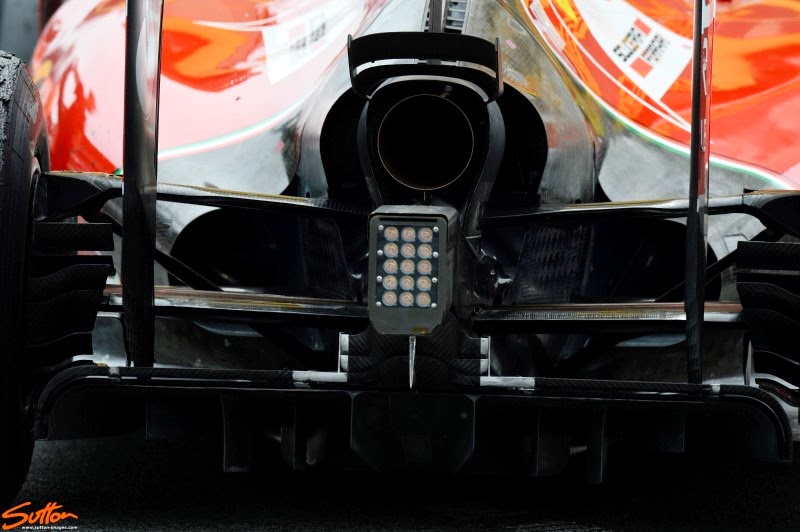 The change of solution around the exhaust also comes with a change in size to the exhausts tailpipe,
increasing it in diameter likely to match the requirements of the Y-Lon which will undoubtedly give a rise in aerodynamic performance.