The circuit de Catalunya provided the backdrop for the second of the 2014 post race in season tests, but what was learnt? Well for starters we got the first look at the sports attempts to increase the decibel level of the new powerunits, which was a little disastrous to say the least. A foolhardy attempt at increasing the exhausts tailpipe was the first rudimentary attempt at increasing the noise emitted by the powerunits.

The FIA and Mercedes decided to trial the 'megaphone' style exhaust outlet during the post GP test in Barcelona. The 'megaphone' is simply an attempt to amplify the noise already produced by the powerunits, it is simply a means of extruding the pipework so the result is minimal, raising the level of noise emitted but the sound doesn't carry as far. 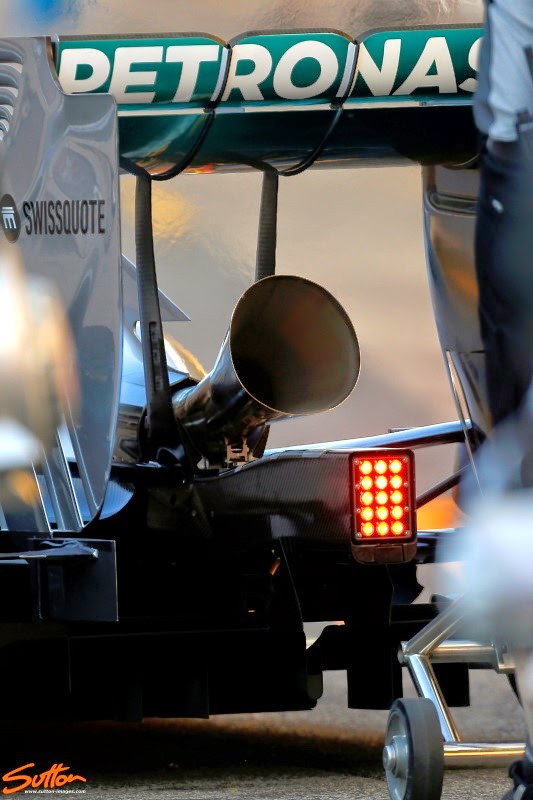 In reality all I can say is the noise we have is really down to the regulatory changes that were implemented. A turbocharged engine will always produce significantly less noise and be lower pitched than its naturally aspirated counterpart, for two good reasons: The turbo's job is to take the wasted energy normally dumped out of the exhaust, part of which is noise and re-energise it. This means the noise that is normally generated is dampened by the turbines impeller, using that energy (and noise). By virtue of the turbo, turbocharged cars are able to make power at much lower rpm, leading to around 6000 rpms less than with the V8's. (Lest we forget the old dogs were actually able to rev out and make more power past 18,000 rpm) This drop of 6000rpm is a major factor in the audible battle especially as gear change drop off / max performance was actually above what the new powerunits actually rev out to (somewhere between 11,500 to 12,500rpm dependant on team/manufacturer/map choice) making it easy to see why their shrill was much louder / higher pitched.

This latest decibel debacle is another in a long line of comedic episodes created by the sport that calls itself 'the pinnacle of motosport'. For all intents and purposes Formula One is the pinnacle it is a breeding ground for the very best engineers, designers, drivers and one could say manufacturers. However as always Formula One finds itself arguing with how relative it wants and needs to be.

This storm in a teacup could have been avoided some time ago but instead the sport (as it always does) has left itself open to criticism, can't or won't defend itself in a technical matter and instead panders to the neigh sayers. The architecture of the current regulations was not simply dreamt up overnight and in their current guise have been largely available since circa June 2011. The brainchild of former FIA president Max Mosely the original regulations (2010) called for an even more aggressive downsizing of the ICE (Internal Combustion Engine), calling for an inline 4 cylinder 1600cc engine like you would find in most hatchbacks (at the time).

The plan to switch to inline 4's (originally earmarked for 2013) was met with objection from Bernie and Ferrari, who believed the radical change in engine architecture may well help to drive a change in the motor industry but was too far removed from the spirit of Formula One. The biggest losers in this debacle was those that had already invested time, money and R&D in the inline 4 concepts, to get ahead of the competition for the planned change in 2013. Renault, Cosworth & even P.U.R.E had actively driven resources in this direction, to steal a march on not only the current F1 suppliers (Mercedes & Ferrari) but any other manufacturers that had been enticed by these new regulations. This was real world investment that was essentially shelved, making way for another costly development in the shape of a V6 1600cc ICE. The change in ICE architecture was also met with a years delay in regulation change affording the manufacturers more time to develop the technology.

This in my opinion was the first blow in what has become a cascading change to the landscape of how the regulations are shaped. Ferrari has always held firm in its stance that Formula One needs Ferrari as much as Ferrari needs it but over recent seasons other teams have adopted this stance too. The teams now have far too much power to influence the direction in which the sport is taken and essentially meet their own needs, even if those needs are greater than the sport itself. The sport is constantly looking to be something different and that suits all parties rather than those parties conforming to the construct.

The Strategy Group is the latest in a long line of initiatives that see's the power of the sport placed in the wrong hands. The group consists of just six members (Mercedes, Red Bull, Ferrari, Williams, McLaren and one floating member based on finishing position, currently occupied by Lotus) from the sports eleven teams giving a poor representation of what is needed in the sport to create balance. Of course one of the five other teams is represented, as Toro Rosso's say will be the same as Red Bulls. This leaves Force India, Sauber, Marussia and Caterham without a voice, as they're the teams that are probably most affected by any regulatory change due to their lack of resources compared to the other teams, I'm sure they find this an extremely bitter pill to swallow. The aim of the strategy group is to create a dialogue between the teams and the FIA, paving the way for changes to the sport. This is a slippery slope in my opinion with the regulatory body (the FIA) the only party who should be involved in the decision making process. The strategy group are making thinly veiled attempts at passing off some of their recommendations as being aimed at increasing the show for the public, however as always I'd suggest this is really an attempt at driving forward their own agendas.

Going back to the sound of Formula One and it's easy to see that the noise we have now is based on the architecture of the technology in use, any changes to improve the sound will either be frankly ridiculous (like the exhaust tested by Mercedes) or require regulatory change. The latter isn't viable, even with the PU's being re-homologated for 2015 their design is already well under way, changes now would be catastrophic. This makes life difficult for Bernie who is under pressure from the circuit owners that have contracts with Formula One and feel they aren't getting what they paid for. I do empathize with them but they too must have been naive, not able to think for themselves or have people around that are technically inept in order that they didn't understand the switch to the new powerunits would lower the volume. Afterall it's not like we haven't been here before and seen downsizing, furthermore this technology is new to Formula One and so I'll guarantee that there is still some movement in terms of both performance and therefore the audio, changing the sound of F1 as the teams begin to understand it (just think about the machine gun sound of 2011 when Formula One used off throttle blowing to garner more performance).

I remain ok with the sound, as I'm hearing much more of what's going on with the car, like tyres squealing under load and the plank bottoming out.  However I do think FOM could do a much better job of working on the sound levels to give the broadcasters more to work with, afterall I prefer to hear the car than some of the mistakes in the commentary ;).