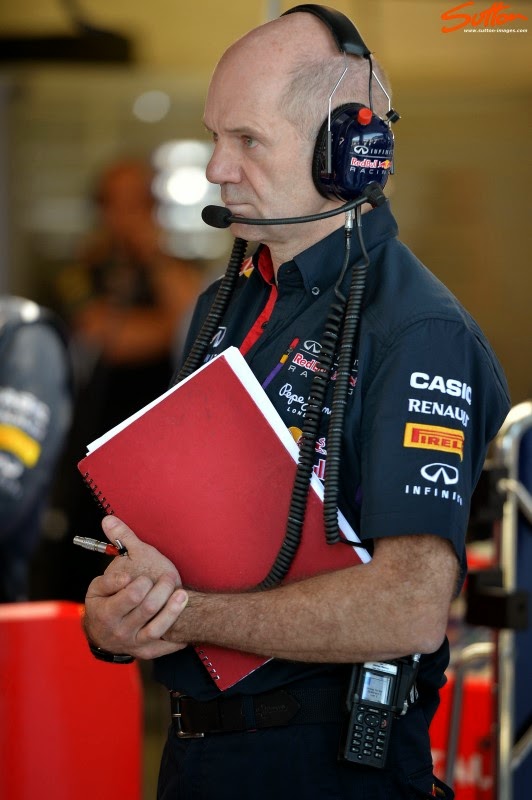 Red Bull have today announced that Adrian Newey has infact signed a new deal with them after mounting speculation that Ferrari were trying to entice him to work for the prancing horse, reportedly worth around £20 million per year.

The release in full:

Red Bull is pleased to confirm that it has extended its successful relationship with Adrian Newey with a new multi-year agreement.
As part of this new agreement, Adrian will work on new Red Bull Technology projects, as well as advising and mentoring Infiniti Red Bull Racing as it develops its Formula One cars over the next few seasons. The details of the new projects will be announced in due course.
Adrian joined Infiniti Red Bull Racing at the beginning of the 2006 season as Chief Technical Officer. In 2010 the team won its first Drivers’ and Constructors’ World Championships; the Austrian-owned team has retained the titles ever since, winning both Championships again in 2011, 2012 and 2013.

Adrian has already alluded to his disdain for the regulations that prohibit Formula One this season and so for me it is of no surprise that he is looking for new challenges.  Already linked heavily with building an America's cup vessel and eager to work on other projects outside Formula One, Newey's involvement in the Formula One team will clearly be lessened.  It's a shrewd move indeed by Red Bull allowing Adrian the time, space and resources to follow his other ambitions, taking him off the market and out of the grasps of other teams eager to align with his expertise.

That doesn't mean he's stepping away completely and will still advise the team as they look to challenge for more titles but essentially Red Bull are now in the market for a new Chief Technical Officer.  Their junior team Toro Rosso luckily acquired the services of the promising talent James Key in 2012 and has likely impressed, as he has restructured the Italian based squad with less resources.  James is the most likely successor to Adrian in my opinion with the Red Bull teams transferring talent from one squad to another just as they do drivers.

Adrian's decision comes off the back of a relatively poor start to 2014 but that's in comparison to 4 consecutive championship winning seasons and so they're still not in bad shape, with most of their performance deficit down to the ailing Renault powerunits.  It also aligns with the loss of Peter Prodromou to McLaren and the inevitably reshuffle of the pack (including Dan Fallow's return to Red Bull and the ensuing fall-out with McLaren).  Adrian, has undoubtedly been a pivotal figure in Red Bull's rise, with no other Technical Director able to eclipse his credentials but he is just the cement in a well built wall.  Others largely out of the limelight have to come together to achieve the success that the Red Bull team have enjoyed over the last 4 seasons and so the right person could continue his good work.
Tagged
Newer Post Older Post