The Mercedes team presented the W05 with a new rear wing in Spa, reducing the level of downforce that could be achieved but perhaps more importantly reducing the drag too.  Monza provides the teams with a  unique challenge, with the longer straights putting even more emphasis on drag reduction.  With this in mind Mercedes have arrived with a similar wing to the one they used in Spa, however it does feature several subtle differences. 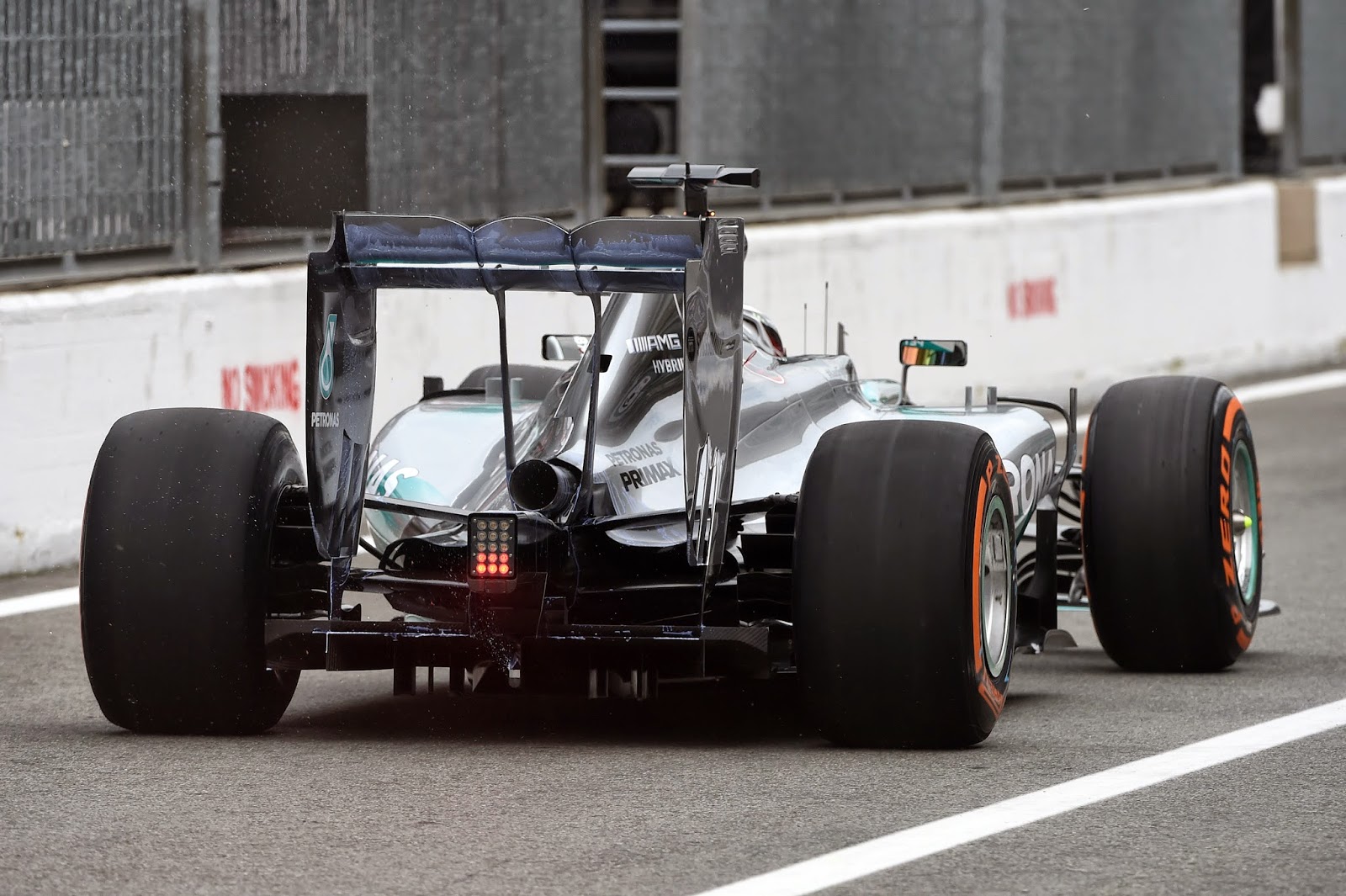 The Mainplane has been flattened out, reducing the wings overall angle of attack, whilst the length of the mainplane is also reduced (note the distance from the edge of the endplate, (below) places the mainplane much further back than usual). 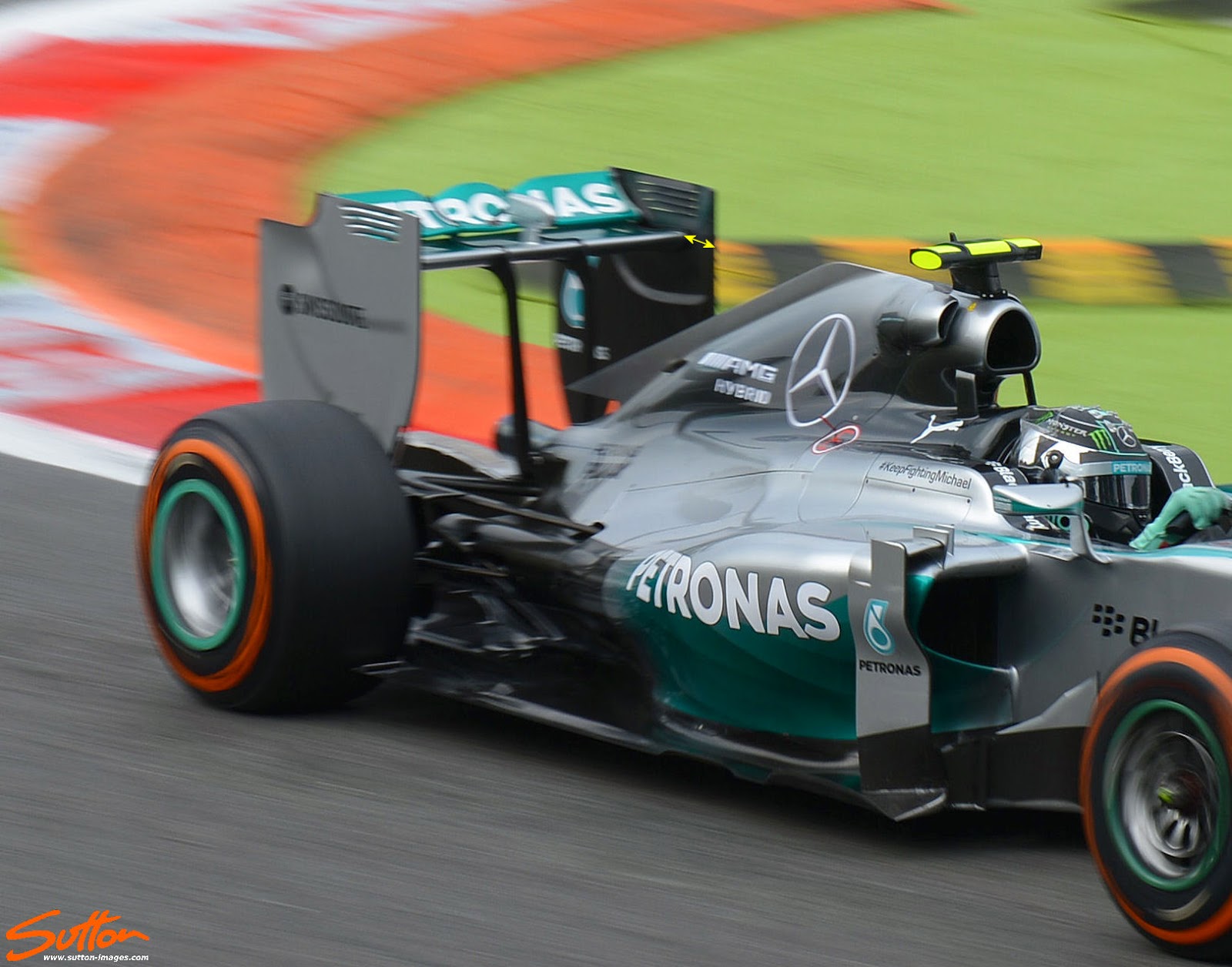 This reduction in the mainplanes length means that the team have also had to re-design their support pylons, with more substantial appendages in use, arc-ing back to reach the mainplane at their uppermost point. 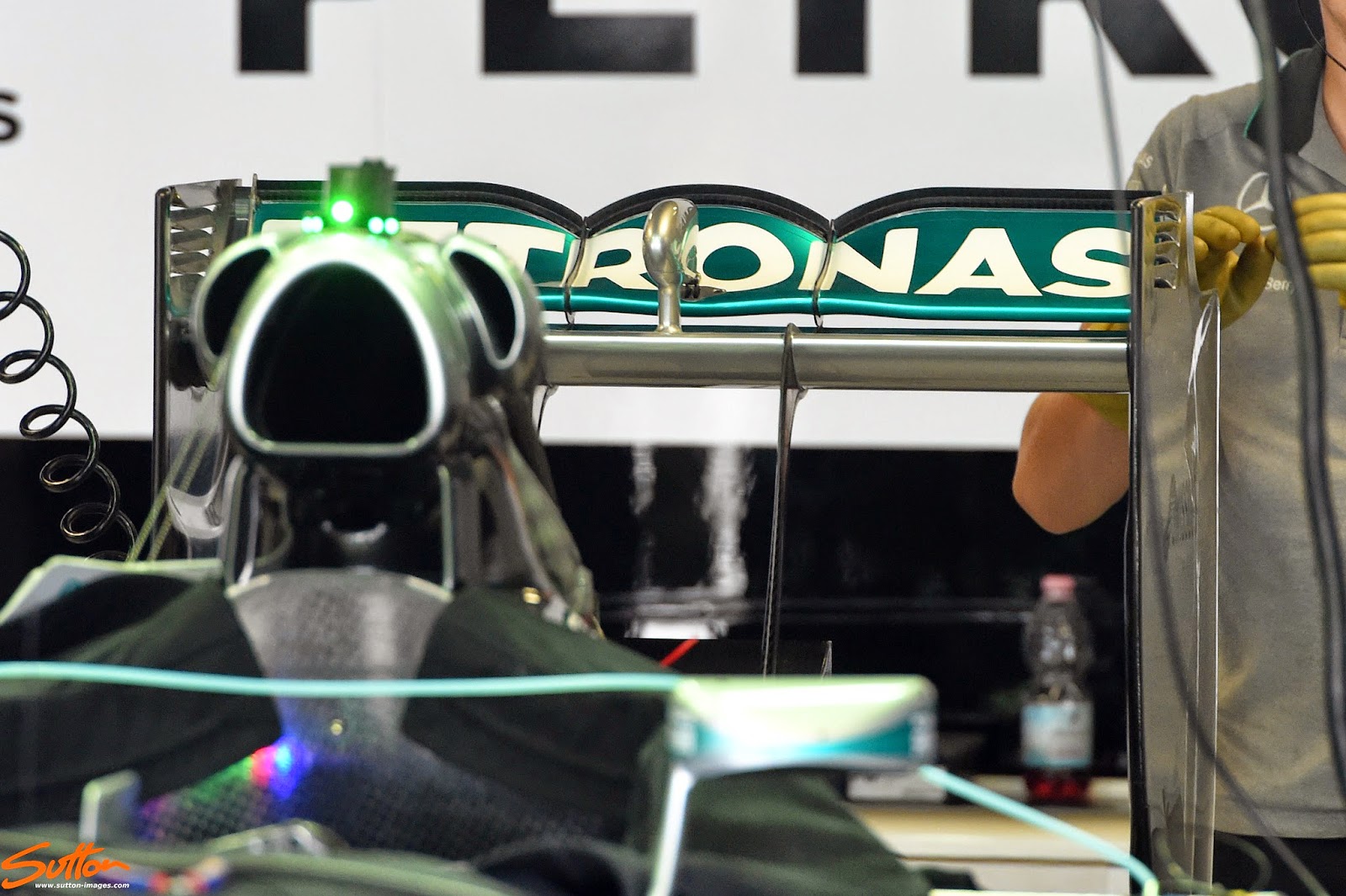 The upper flap must be shorter in chord length by regulation, but as we can see the two are quite close, meaning DRS will still have some effect should they need it.  The upper flap also features larger V grooves and a curved lower edge which work in a 3 dimensional sense to achieve both maximum downforce for the least drag.  (To appreciate the curvature of the wing and v grooves it's important to look at it 3 dimensionally).

The top flaps outer edges have reverted to their regular straight edge, rather than the curved ones used in Spa as drag reduction is also being taken care of more centrally.  The loss of AoA also puts less emphasis on the louvres placed in the endplate with their number reduced from 5 to 4.

The team have also removed their Y100 Winglet / Monkey Seat as with the rear wing sporting a shallower angle of attack it doesn't necessitate the winglet to overcome the attachment issues at low speed.

Having removed the upper Gurney Trim from their wing in Spa and in an effort to cut drag further, both drivers are trialling the wing with and without the gurney before qualifying.  The gurney is used as a fairly blunt method of increasing downforce/balance but comes at the cost of increased drag, obviously at Monza it would be desirable to run without one but the drivers may prefer the extra balance in the slow speed corners. 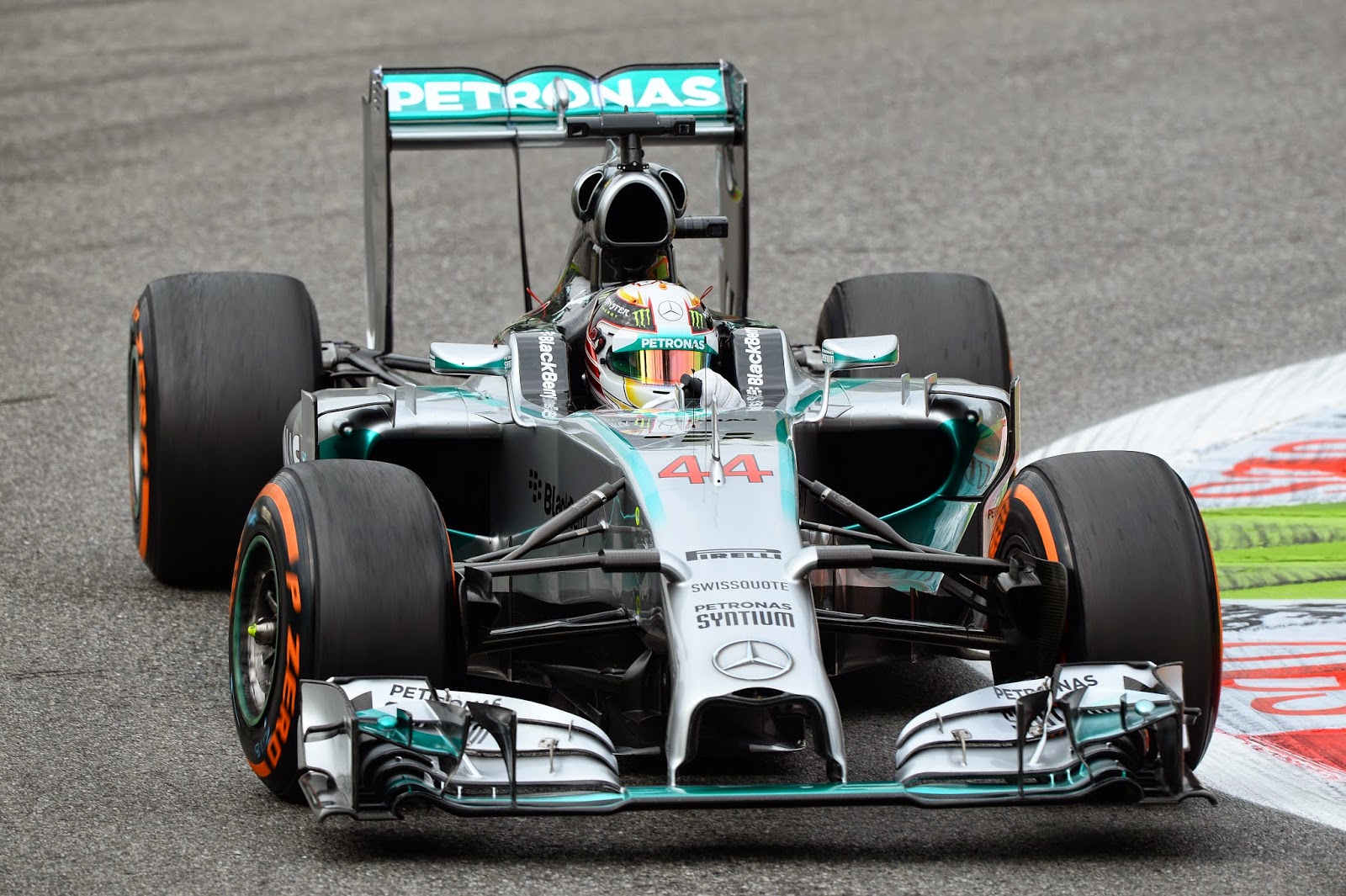 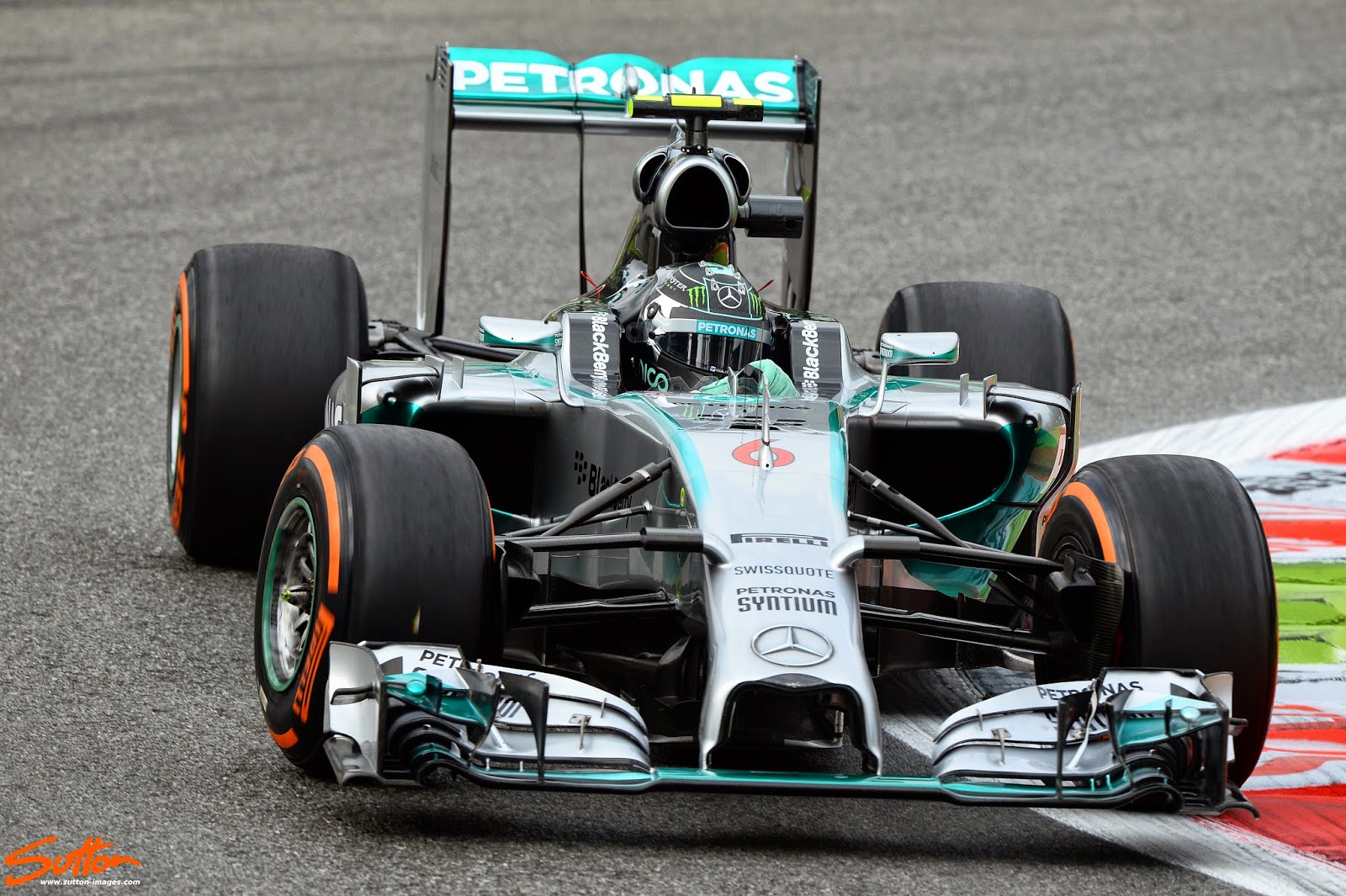 The teams approach is outwardly more complex than some of its rivals with the team clearly using more angle of attack, thus incurring more drag and needing to find other design cues to rectify it.  However the team are still right at the top of the speed traps, making it clear that the powerunit is having to overcome some of this deficit.