Caterham: A (not so) brief history 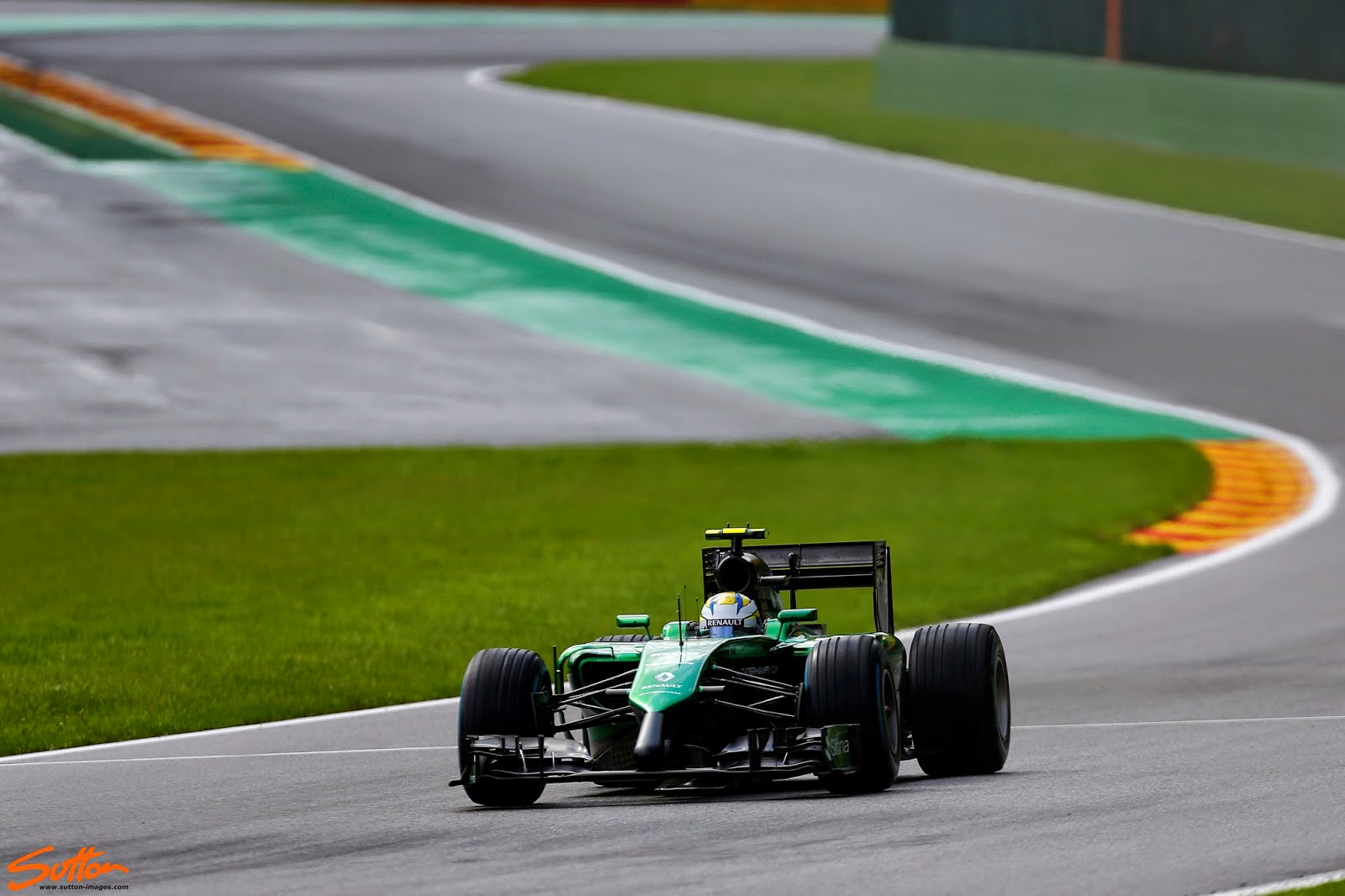 Lets take a look at the chequered history of the team we now know as Caterham and try to read between the lines of the current issues and its haunting past.

Cast your mind back to 2009 if you will and the genesis of Fernandes' dream to take on the might of Formula One and win.  The landscape of the sport was a little different from the one we have now but just as unstable, having lost manufacturers like Toyota, Honda and BMW in the wake of the financial crisis.  The latter two were saved by figureheads of their respective teams but another ripple was about to be set in motion.  Max Mosley was in charge of the FIA and had seen the writing on the wall, in an effort to save Formula One as we knew it he decided that a two tier set of regulations were to be drafted and implemented for 2010.  This was an attempt to lure in new teams, with the incentive of more open regulations should they be able to stick to a £40m budget cap.  This left a bad taste in the mouth of the remaining teams who joined together to re-nounce Mosley from his presidential position and install their own (hidden behind a firewall) resource restriction.

Having already elected to submit applications to the FIA under the proviso of a Budget Cap 3 teams were granted additional entry to the 2010 Championship: Campos META, Virgin Racing and USF1, the latter failing to make the mark and was replaced by the Fernandes entry on 14/09/09.

Fernandes entered the Formula One stage (2010) under the guise of Lotus Racing a moniker he had on license from Group Lotus (more on this later).  Heralded as a return of the 'classic' Team Lotus, Fernandes had ambitions of rapidly ascending to the top.  With Mike Gascoyne previously of Force India employment at the helm it was remarkable the team made it to the season opener, but from there it was pretty clear that being competitive was going to take some serious effort.  At this point it may be worth pointing out that Gascoyne's involvement in the project had come after a bid worked on by Gascoyne for Litespeed had failed.  This also led to a lengthy court entanglement in which Gascoyne/1Malaysia Racing/Aerolab etc were implicated in the infringement of Force India IP.  The case was overturned but it did damage the teams credibility in the interim.

Although the team raced as Lotus they actually traded as '1MALAYSIA F1 TEAM (UK) LIMITED (Company No. 07042086)' with the team changing their UK company registry as such on 04/11/2009.   At this stage it became apparent to me that Fernandes was using the Formula One team as a Trojan horse, a means to leverage Lotus cars away from Malaysian government that owned Group Lotus, with which he had dealings with when he acquired Air Asia.  Unfortunately for Fernandes, at the time Dany Bahar was at the helm of Group Lotus, trying to shape the Lotus brand in a way that it could surmount a challenge of the company he'd just left: Ferrari.

In 2011 the 'Lotus' war began with Fernandes having acquired 'Team Lotus Ventures Ltd' as he tried to not only renege on the licensing agreement he'd had with Group Lotus but also claim to be the true 'classic' Lotus team.  Group Lotus' reaction and moreover Bahar's was one of disdain and subsequently led to both a protracted court battle over the naming of Fernandes team but also a sponsorship deal that entangled the Enstone based team: 'Lotus Renault GP'.  The fallout is still visible today as Lotus F1 Team are merely racing with the moniker, whilst Group Lotus retain the exposure without investing in the team. (a situation caused by the loss of revenue if you change names midway through a Championship, whilst Lotus remain resolute even without their support it brings extra prestige to their team)  In fairness to Fernandes he had found a way in which to run in isolation from the current Lotus and retain some of the original Colin Chapman teams heritage, something which the judge supported, allowing the continued use of the Team Lotus moniker as long as the use of 'Lotus' wasn't used in isolation, as this in turn would compromise Group Lotus.

After a protracted battle and clearly with no chance that Fernandes was now going to take charge of Lotus cars he decided to re-visit another of Chapmans associations, purchasing Caterham.  This offered a springboard for Caterham cars to make use of the worldwide appeal and exposure that Formula One grants with the team renamed Caterham F1 Team in 2012.  Meanwhile the wheels had been set in motion for Caterham to be entered into other series with another name change: '1MALAYSIA RACING TEAM (UK) LIMITED' (note the loss of F1 within the name).  On 02/12/13 the companies house register was amended once more with the company to trade as: 'Caterham Sports Limited'.

2014 offered up another opportunity for teams to make gains on their competitors owing to the biggest regulation shake up the sport has ever seen.  This for Fernandes was the last hurrah, having ploughed millions into the team his reward thus far had been to trundle around at the back of the field, essentially making up the numbers.  As he addressed the staff at Leafield before the 2014 campaign commenced he had this to say:

“My message to the 250 people here is we have to go for it this year. This is it – the final chance,” he said. “We’ve given you the best infrastructure, the best potential drivers, but it is now down to all of you to go and do it.” . . . “If we’re at the back I don’t think I’m going to carry on. Nothing is set in stone, but after five years with no points there is a limit to one’s patience, money and motivation so it’s an important year.”

The writing was on the wall, to find somewhere in the order of 2-4 seconds (which is what they'd have needed to do from the previous car) would be a monumental feat and one that was indeed too far for the Caterham team.  This led to any further interest in the team wavering, supported by his purchase of QPR and making it altogether easier for Fernandes to jettison the struggling outfit when the opportunity presented itself.  This came in the supposed shape of a rescue package from 'Swiss/Arab investors' (Engavest SA), spearheading the takeover were none other than Dr Kolles & Mr Ravetto, previously of HRT (the last F1 team to fold) and Mr Willmer.

The new team registered with Companies House on 23/09/2014 as 'CF1 Motorsport LTD' whilst the current company 'Caterham Sports Limited' had the termination of its current directors and installation of new ones completed as early as 02/07/2014 (see below), not the June 29th date that Engavest SA stipulated yesterday (although a couple of days to make the paperwork changes could be seen as permissible) 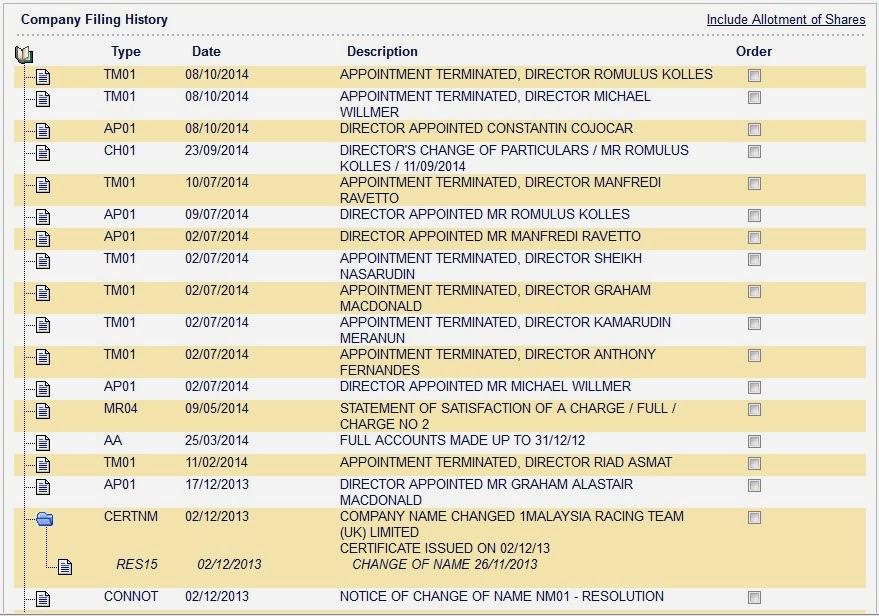 As we can see Ravetto terminated his directorship almost immediately (10/07/14) whilst it took Kolles and Willmer a significantly longer period (08/10/14) to terminate their involvement, meanwhile installing their fall guy Constantin Cojocar who now remains the sole director of Caterham Sports Limited.

The thing that really muddies the waters in the whole debacle is that although the company has traded under various names (changes with Companies House) in the UK, the Malaysian company 1Malaysia Racing Team sdn bhd owns the license to race in Formula One.  The administrator that locked the staff out of Leafield yesterday (23/10/14) was doing so in order to resolve the issues surrounding 'Caterham Sports Limited' who own the assets including the cars that the team wanted to ship to Austin.  What isn't clear is what Engavest SA (the ones who supposedly have the Swiss/Arab money) have actually purchased, in its statement yesterday (below) they claim to have signed a sale and purchase agreement for the shares in 1Malaysia Racing Team/Caterham F1.  This raises the question, did they simply think they were buying the license to race? 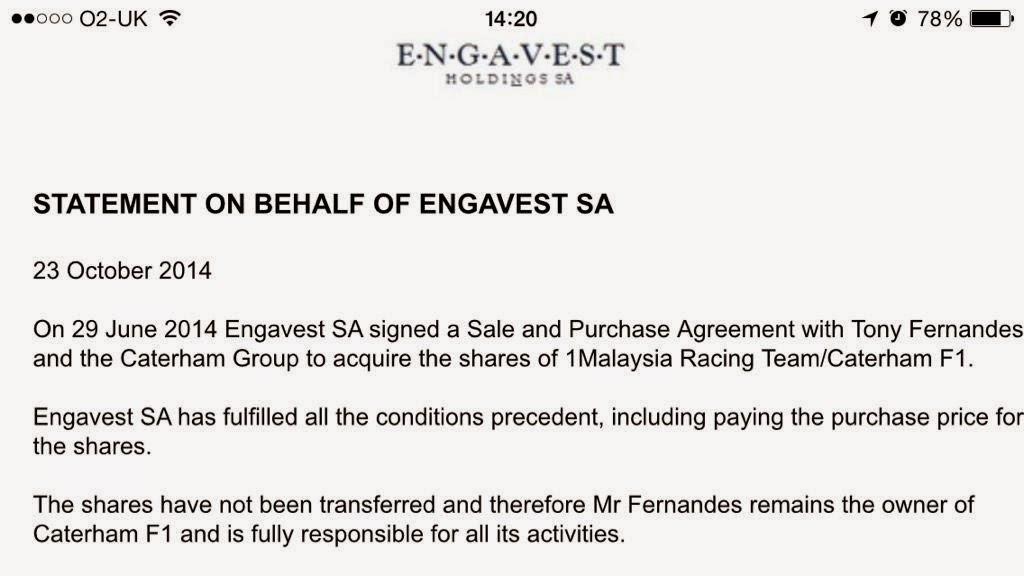 In a statement by Fernandes he contradicts this information citing that Engavest would pay all existing and future creditors including the staff. 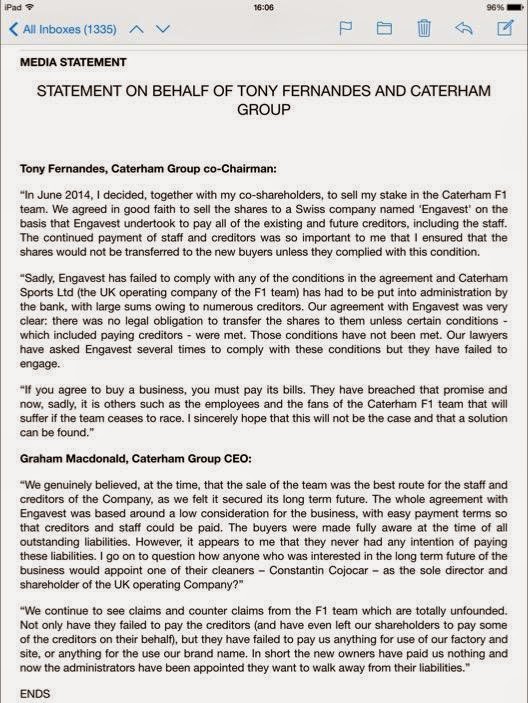 The creation of 'CF1 Motorsport LTD' by the new owners is something that nags at me, as only a change of name from the original company 'Caterham Sports Limited' with companies house was really necessary.  Was their desire to sell some of the assets to the newly formed company on paper?  The problem for the administrator in this case would have been assessing market value of what had been sold.  As we know the production of parts for a team can cost considerable sums, however when purchased in isolation they could be seen as having far less value.  (Recently sold assets must be done so at fair market value otherwise the administrator can lay claim to them)

The crux of the problem is that the whole affair has now become a public spectacle with one party blaming the other and nobody taking responsibility for either the debts accrued or the impact the companies loss could have on 250+ staff.  The administrator looks like the bad guy having stopped staff from entering the building, however his remit is to look after the interests of the creditors and with little to no money coming into the company and the ownership dispute it makes his position impossible.  With debts thought to be in the region of 20m, a rescue package to save the team is going to need a good structure and some substantial financial clout, all of which the new owners were supposed to provide.  Now it seems its only savior could be a wealthy investor or control being fully handed to the administrator, with the former propping up some of the initial debt and allow the team passage to Austin resolving the debt and restructuring the team over the coming months.  The biggest problem is that with tomorrow (25/10/14) being the shipping deadline for Austin and staff not allowed on site, getting there will be nigh on impossible.  One would hope that Mr Ecclestone could make some concessions in terms of the shipping but inevitably time still remains the largest factor in play.

The biggest losers in the debacle are the staff at Leafield, for whom I hope a resolution can be found.

Having just concluded this post a statement has been issued via the Caterham F1 team clarifying that Fernandes / Exim bank have agreed to hand-over management of the team in the higher interest of the team, allowing continued operation and time to prepare for the forthcoming events.
Great news in the short term as it allows time for the team to prepare the cars and race at Austin etc, however in the long term a financial rescue package and new owners still need to be installed.

Going into administration is not the end for Caterham, as it stands (feuding owners & mounting debts) it was the only real course of action
— Matt Somerfield (@SomersF1) October 24, 2014

The administrator will act in a way which is in the best interest of the creditors, drawing a line and selling the assets or keeping cash
— Matt Somerfield (@SomersF1) October 24, 2014

flowing into the team via its continued running are the only viable options in the absence of a buyer.
— Matt Somerfield (@SomersF1) October 24, 2014