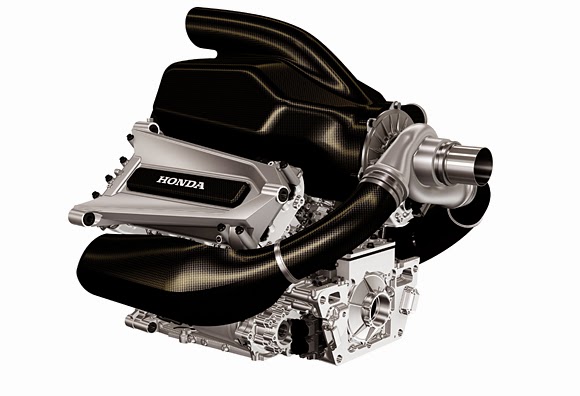 Using the Japanese GP as a springboard (and why wouldn't you) Honda have released the first image of their 2015 Powerunit.  They've also provided some information on their progress and how the new powerunits work in general on their website: http://world.honda.com/news/2014/c141001Formula1-Power-Unit/index.html?from=r

So what can we learn from the image provided by Honda?  Well, probably very little, as with the other engine manufacturers did prior to 2014 I don't see any reason for Honda to supply an actual image of their PU ahead of schedule.  This would simply provide their competitors with a glimpe, all be it small but nevertheless insightful as to their direction.

As I posted the image up on my Twitter timeline first this morning the initial reaction was one of "That looks like the Mercedes PU".  Coming to the party a year late has given Honda a glimpse of what everyone else has done before them and so they can use that and place it in their own Powerunits architecture.  Furthermore, as the Powerunits have specific dimensions mandated by the FIA especially in terms of their mounting (this was done initially so that teams could switch easily from one supplier to another) outwardly the PU's all look very similar.

IF the image were to be representative we could conclude that they may have chosen to run the split Turbo configuration used by Mercedes this season, with the Turbine at the rear and compressor at the front of the ICE with the MGU-H running between the V.  However I'd suggest that the design is more of a halfway house between the Mercedes and Ferrari, as the former place the Turbo much lower in the V.  The height of the turbo in relation to the V may indicate, like Ferrari that the compressor lies within the V putting less emphasis on the strength of the shaft that connects the two, and the design of the MGU-H that resides between them.

The airbox snorkel also makes up the ballistic shielding for the turbo, hiding where it joins to the compressor and the inlet layout from prying eyes.  Whilst in a similar vein to Renault's mockup the exhausts are shown encased in a carbon shroud closely aligned to the exterior of the ICE.  No wastegate(s) are visible either just as we saw with the other mockups.

As we know Powerunit architecture is not only important in terms of producing power but also have ramifications to the packaging of ancillary components, whilst aero design must also be considered.  It's therefore of no surprise that Honda have decided to base their operations in Milton Keynes, not far from the team they'll supply, allowing ease of communication on the project.  Honda's arrival a year later into a new regulation run can be seen as both a good and bad thing, with the other 3 manufacturers having huge quantities of real world data to work with.  Meanwhile it has afforded Honda a glimpse into the direction that would serve them best, with a fresh sheet of paper to design their Powerunit whilst the rest may only change 48% of theirs for 2015.

I look forward to the re-emergence of Honda within F1 and hope that the successful partnership they once shared with McLaren can re-ignite their challenge too.
Tagged
Newer Post Older Post