Audi arrived at the 6 hours of Spa with a revised aero package to test ahead of Le Mans, Spa is the ideal setting to test out the lower downforce configuration, allowing the team to gather vital data.

In this post i'm going to walk you through some of the changes made by Audi for their lower downforce/drag configuration, please remember that the images are of a much higher resolution than those visible in the post, clicking on them will take you to the full res version.

Firstly I'd just like to say that the level of detail changes on the R18 between the two variants is staggering, they are basically two different cars.

Let's start with the front wheel arches (yellow) as some of the shaping detail may not initially seem that different.  However, as we can see there is much more surface area afforded to the low downforce (LD) configuration, with the front face of the arch being taller and having a smaller radius.   The idea of course is to smooth the airflow rather than using the shaping to create downforce.  This also falls inline with the movement of the compulsary wheel arch cut outs toward the rear of the arch (green).  At the rear of the arch you'll note the elongated extension as the arch converges with the sidepod which itself is now shaped differently (I'll cover this more later).

The change in shape has also led to other changes, including a revised set of headlights (blue), the shaping of which is led by the change in ductwork.  Rather than the singular large inboard duct the design team have implemented two smaller ducts, which continue to serve the purpose of controlling how the air flows around the front wheel / tyre toward the sidepods turning vanes.  The quantity of dive planes (red) were shown as reduced from two per arch to one too, with the angle of attack also being reduced, clearly another attempt at reducing drag in the studio released image.  However, at Spa (Below) Audi ran with two dive planes, albeit with the upper one reduced in length owing to the ducts interaction with it. 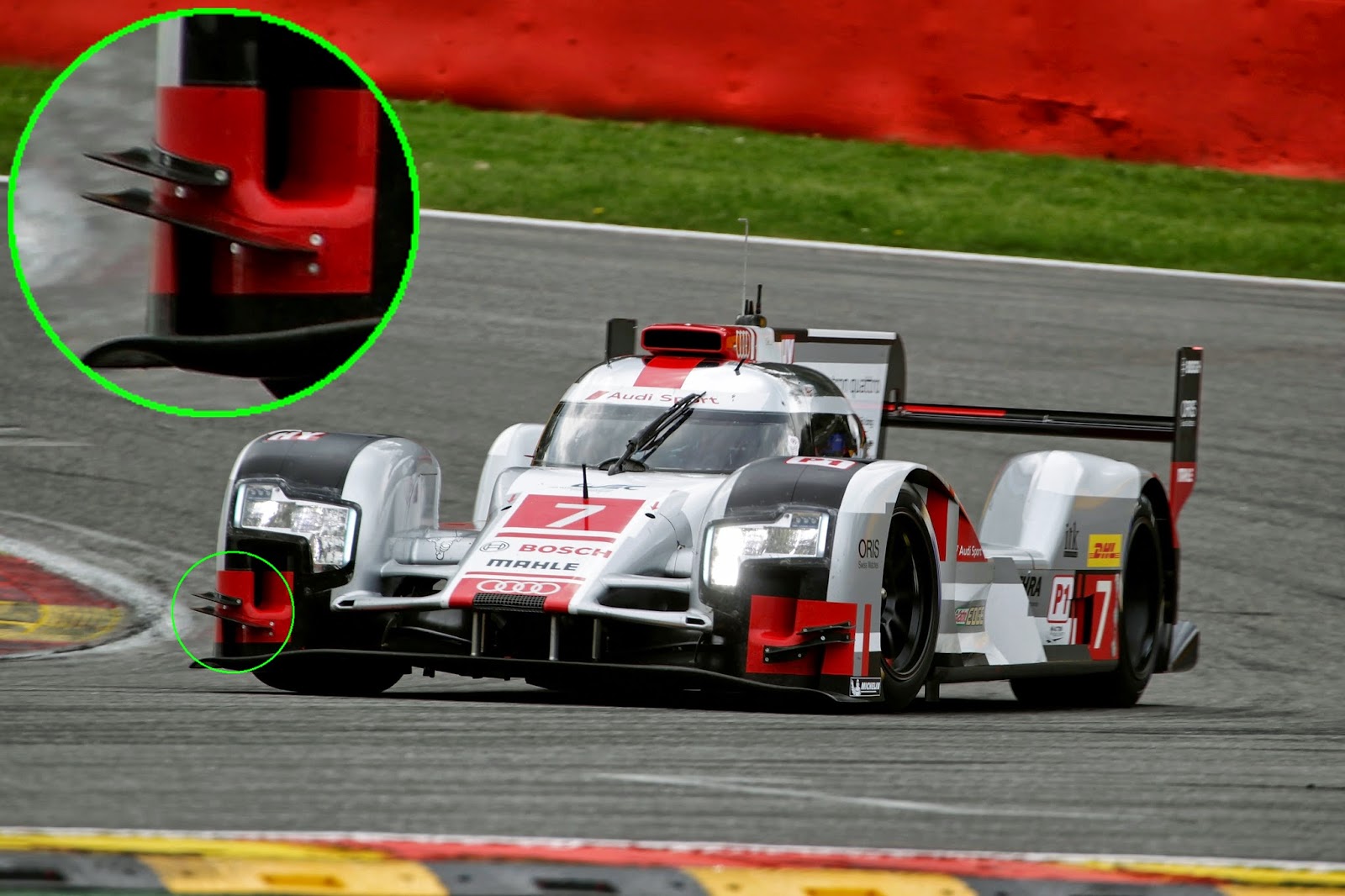 The nose section of the R18 has also seen heavy revision, along with the suspension covers which double as aerodynamic profiles.  These have been reduced in their surface area, AoA and height in order to change how the air moves under and over the rest of the car.

Meanwhile the nose itself, previously shaped with a 'Pelican' underbelly to create downforce from the floor is now more wedged shaped, reducing drag.

From the side view we can see a quantity of changes made to the bodywork in order to change how the airflow moves around the car.  The change of wheel arch at the front of the car is met with a change in ethos behind the wheel too (yellow), with the previous radius arch exhcanged for an almost straight leading edge, which is shamfered to lead airflow outbound from the wheel arch.  Furthermore, where that section of bodywork previously ran almost the full length of the cars side at the base it is now a very short section that allows airflow collated inboard a more immediate exit.  This has enlarged and reshaped the secondary control panel (blue) which is shaped similarly to the previous forward (yellow) panel on the the HD configuration, albeit with a smaller tail section.  Meanwhile the shortenening of the forward panel means another control panel in the central section (red) mirrors the secondary panel from the HD configuration. 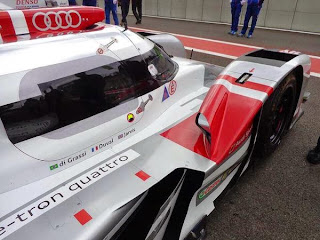 Above: Image via @Sabbatini

The change of arch shape also means a shallower transition on the upper surface of the arch with the team moving and reshaping the bulge that sat alongside the mirror in the HD configuration, but houses the mirror in the LD configuration.  This also leads to a small change in the length of the sidepod (purple) as more of the surface becomes exposed.

Bodywork changes at the rear of the car are extensive too, you'll note a inboard duct has been added ahead of the rear wheels (just infront of the #7) which assists the flow around the rear wheel. A change in height and radius has been applied to the leading edge of the wheel arch (yellow).  This elongates the flat top section, whilst widening the surface too (note the loss of the outbound sculpting).  Meanwhile the mandatory arch cut out (green) has been reshaped, with a reduction in length and increase in width applied.  The arch leads into a narrower rear end (purple), which can be determined by the diffuser that remains at full width (red).  The narrower rear end means that the rear wing endplates (blue) have found a new mounting point and feature a sculpted lower trailing edge, rather than the straight trailing edge the HD configuration features.

Rear end images of the R18 LD configuration are a little thin on the ground at this stage but once I get hold of some I may update this post.

The changes made by Audi ahead of Le Mans are about reducing drag, however, they weren't particularly slow through the tighter, twistier middle sector in Spa and so clearly weren't giving up huge chunks of downforce, relative to the opposition.  Efficiency is the name of the game at the end of the day and so it appears they have been able to retain similar levels of downforce for less drag, making the package ideal for Le Mans.
Tagged
Newer Post Older Post