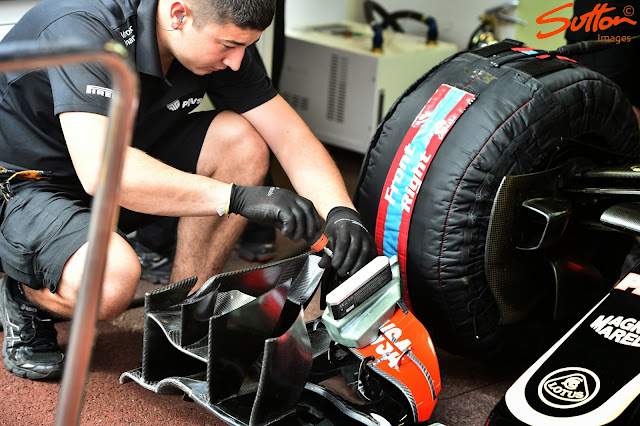 The FIA have reportedly issued a technical directive to the teams, suggesting that they will introduce a new front wing deflection test, incorporating a trailing edge flap test for the first time.

Details of the new test were exposed by Motorsport here: http://www.motorsport.com/f1/news/fia-toughens-up-front-wing-deflection-tests

The crux of the new test are as follows:


'A 60NM point load will be applied to any part of the trailing edge of any front wing flap.

The load will be applied normal to the flap at the relevant point, and the deflection may not exceed 3mm when measured vertically at the trailing edge in order for the wing to meet the regulations.'


We have suspected for some time now that teams are using flaps that deflect under load to improve the overall efficiency of the car.  The onboard footage of flap deflection on the Williams FW36's front wing in Spa 2014 aroused suspicions with just about everyone about how their wing operated: http://www.gfycat.com/MiniatureYearlyGar.  Of late I have noted from the onboards that Toro Rosso's front wing flaps deflect in a similar manner and whilst flap deflection is inevitable, as pressure builds, the way in which this seems to be happening on these and other cars is not natural.

The front wing designs we see now are compartmentalized, with the outer section used to deal with outboard tyre wake, whilst the flaps deal with generating downforce and the Y250 vortex. Observation of the flap movement suggests that the flaps decline, which would suggest that the teams are looking to reduce drag. What should be considered is that the gap between the flaps may also be being reduced, leading to a 'stalled' situation, with the airflow unable to sustain the angle of attack. Meanwhile, the change in the flaps tip angle also changes the way in which the Y250 vortex operates too, changing airflow downstream.  The overall idea is a reduction of drag and increase in efficiency but as always it's easy to think about the direct consequence of a component but in reality there is always much more to the story, especially when it's the front wing in play....
Tagged
Newer Post Older Post