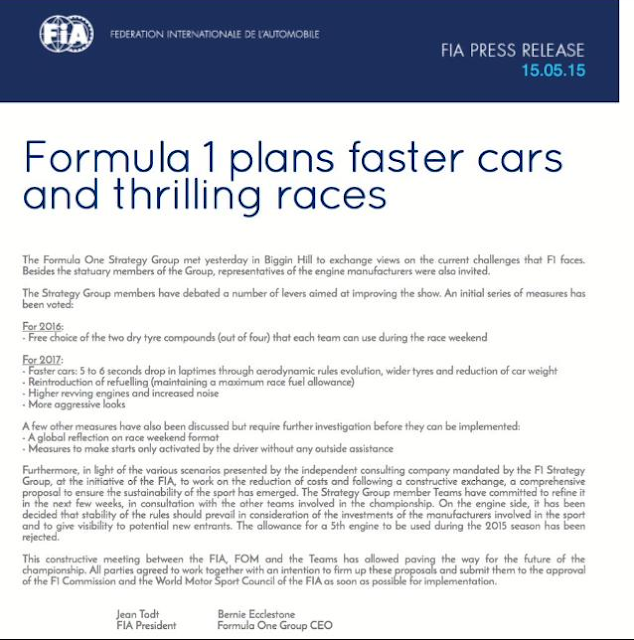 Ok, so everyone is reporting the results of the Strategy Group (SG) meeting and what the discussed changes could have on the sport (just as I did here: http://www.planetf1.com/driver/3260/50399/Problems-Not-Solutions).

Firstly, I think it is important to say, we'd all like to see cars that are 5-6 seconds a lap quicker than we currently have, especially with many complaining that the drivers don't drive flat out all the time.  Frankly though, they never will, as there is always an element that requires race management, for the betterment of strategy.  The teams understand that sometimes to go faster you actually have to drive slower, meaning we get drivers driving to a delta and saving a pit stop, fair enough this has been exacerbated by the maximum fuel weight but I'd bet a sizable chunk of money that the drivers aren't starting the race with that maximum fuel weight.
That might sound ludicrous from the outset but fuel is weight and weight can be detrimental to lap time.  If you can complete a race distance in lets say 1hr 29 minutes by driving slowly, with 80kg of fuel owing to less tyre wear and therefore less stops, why would you take 100kg of fuel, take one more stop and complete the race in 1hr 30 minutes?  The example is obviously an exaggeration but it is something that must be considered.  Even in the V8 era drivers conducted fuel saving, it just wasn't so apparent, as there was no maximum fuel weight limit the trade off could be mitigated.

I'm not going to suggest I'm right or others are wrong but what I'd like to do here is make some suggestions on the direction I would like to see the sport go.  As most of you know I'm in favour of the current regulatory format but there are numerous tweaks I'd like to see to improve the racing.

The most complained about element of the current generation of Formula One cars, with many suggesting that the V6 hybrids were a mistake on several levels.  The powerunits (in most cases) actually provide a little more peak power than the outgoing V8's but also weigh considerably more too, reducing the power to weight ratio.  Reduction of the weight, however well intended by the SG's manifesto, is a fools errand, with the minimum car weight dictated by the dry weight of the car and powerunit.  Weight reduction is only really viable with their refuelling caveat, of which I'm really not a fan, as I want to see these guys racing out on circuit, rather than duking it out via strategy in the pitlane.  Personally I feel a return to refuelling may sound like a good idea from the outside, ie having less weight onboard, which allows the drivers to push, but instantaneously it leads to engineers thinking about preserving stint life, rather than pushing, just as they have come to do under the current regulations.

I'd actually suggest that the fuel weight for each GP be increased to 125kg's, allowing a slightly wider performance window, enabling the drivers scope to push, although I think you also then have to have a minimum fuel weight too, as otherwise it'll sometimes be faster to be slower, ie less time in the pitlane changing tyres that you've worn out pushing hard.

Meanwhile the formula at 10,500rpm that currently dictates that the powerunits can't achieve usable power beyond 12,500rpm(ish) should be adjusted to allow the engines to rev out to the full 15,000rpm.  If fuel flow isn't sufficient to facilitate this then this be amended too.

ERS be expanded upon too, increasing the Energy Store from a maximum capacity of 4mj's to 6mj's, whilst increasing the upper power release from the MGU-K from 120kw's (roughly 160bhp) to 175kw's (roughly 235bhp).  This retains a similar formula to the pre-existing one but takes into account the extra electrical energy that can be harvested braking from higher speeds and the additional energy the MGU-H will require to assist the turbo.

These changes will require the homologation matrix to be relaxed and re-instated after the powerunits re-birth, as although the regulations permit 15,000rpm many of the components are currently designed with tolerances below this.  The changes should also increase the sound of the powerunits to a more acceptable level to both fans and track organisers.

I don't care for the introduction of 18" wheels/tyres, if this is the only reason for Michelin to return then they shouldn't.  F1 has done enough pandering toward road relevance, after all when was the last time you saw a 200+mph open wheel road car?  In my opinion 13" wheels are fine and mean that the teams don't have to spend money developing suspension that can handle the change. IF we must increase wheel diameter then 15" would be the maximum I would suggest.
Pirelli have come in for some pretty harsh abuse over the years but did provide what was asked for.  Should they stay on as supplier past their current contract, which runs until the end of 2016, perhaps some revision of the rear tyres width could be made, something in the order of 425mm-450mm (up from the current 380mm) but this will clearly have an impact on the wake produced by the car, requiring some thought on how to counteract this through aerodynamic regulation changes.  Furthermore, I'd be interested to see proposals from Pirelli, specifically on how they'd like to improve things, perhaps expanding upon the number of compounds at their disposal to better cater for the varying track characteristics.  I'd also like to hear their ideas on a qualifying tyre, maybe a compound more aggressive than the lowest race compound, to increase qualifying pace.

A complex department that doesn't have a strict answer, whilst many are calling for more downforce to be added, all I remember is that it took the technical working group numerous years of research to come up with the 2009 regulations, resulting in a car with significantly less wake than its predecessors but still not enough to close the racing up.  This is why a technical working group (TWG) needs re-establishing, in order that research and simulation be conducted to assess what will and won't work.  Simply making bold statements like, 'More aggressive aero,' is fruitless, aggressive in what way? aesthetically or aerodynamically?

One of the blanket statements I see touted around the most is, 'We should return to ground effect," which appears to stem from an understanding that underfloor aero is free of drag and wings are just plain evil.  There is of course truth in that, but for F1 where extreme competition breeds a need to push the design envelope, the result could be catastrophic.  Just like the dimensional constraints currently placed on the diffuser restrictive regulations would need to be placed on the creation of venturi tunnels.  This is all feasible but requires R&D and an outside hand in the regulation framing.


DRS and other moveable aero has always been contentious to fans, and even more so to the hardcore element who find the whole concept an abomination.  Unfortunately, the wake currently produced by Formula One cars makes its use a necessary evil but something for me that no longer performs the function for which it was originally intended.  In my opinion DRS currently provides the means for a car on fresher tyres to dispatch one which is on worn tyres, returning the cars to the equilibrium they were in before the pit stop phase, which is not the systems original intention.  Its strategic deployment was neutered when the FIA stopped adjusting DRS zones after FP1 and prevented unlimited use during qualifying.

In my format I'd suggest that 'activation zones' be retained, but rather than allow only the chase car to have it at their disposal allow free use for any car.  The caveat is that drivers have a pre-determined time usage for DRS throughout qualifying and the race making it a tool for both defence and attack, whilst also a strategic device for qualifying, performing the undercut, a blitz lap out of the pits, etc etc.

I'd also suggest that the re-installed TWG look into the adjustable front wing design used in 2009 and canned in 2010 owing to the double deck diffusers, with the possibility of its reinstatement to facilitate close racing through the corners.

Formula One's fan base is in decline and has been for some time, the racing can only be blamed in part for this, with viewing factors also coming into play.  Other sports conclude proceedings in a short time frame which holds the attention span of the viewer for that fleeting moment.  For example the typical football (soccer for my Amercian readers) match is 90 minutes not taking into account stoppages and/or tournament rules such as extra time and penalties.  Formula One's race alone can exceed this time frame and whilst most fans don't engage fully with Free Practice sessions, just as most football fans don't go to their teams training ground to assess their performance ahead of the game, we also have to consider qualifying as an important phase of a GP.

I understand that FOM and the FIA have other factors to take into account such as time zones and complimentary series' such as GP2/3 but I would imagine that the protracted race weekend is a factor for the younger generation.  FormulaE has circumnavigated this issue by compacting qualifying and the race into a single day and although this is also due to logistical issues with city centre racing it'd be interesting to see what a similar change would do to increase F1 viewership.  I'd therefore suggest a change of scheduling format with qualifying and the race on a Sunday, with a time gap between the two allowing other series and events to feature.  Furthermore, I'd make Free Practice two long time slots on Saturday, (rather than the current 3 session setup, split between Friday and Saturday).

This is just an idea for a shorter format (and something that would most certainly need adapting) but isn't only aimed at facilitating a spike in interest from a new audience / younger generation, but as a way of re marketing Formula One for the circuit promoters.   Fans will tell you going to a race is an expensive affair, not only do you have to find the funds for a the ticket(s), you either need to travel to the venue each day from home, which incurs costs, or you need to stay in a hotel which is even more costly.  Shortening the race weekend, should reduce the cost to those who wish to watch each session, whilst the inclusion of qualifying and the race on a Sunday makes the ticket more-or-less worth its face value.

There are no easy solutions or short cuts, putting loads of ideas in a hat and drawing them out randomly certainly doesn't fix F1.  Take stock, realise what we have isn't that bad and take measures to rectify its inefficiencies.
Tagged
Newer Post Older Post