I've decided to create a post after each GP from now on, for those that follow my blog or have the RSS feed etc.  In it I'll provide the links to my work on other sites and tidy up any of the other developments that I failed to cover for those publications.

The team will be disappointed that they've been overhauled by a resurgent Ferrari so far this season, however they're still in the mix and able to pick up points when those ahead falter.  In Canada the team introduced a new Y150 winglet, allied to a rear wing flap configuration that sacrificed downforce in favour of straightline speed, something they became synonymous with during 2014.  The new Y150 winglet (left, below) cast aside the complexity of its predecessor (right, below) with just the singular upper element tasked with upwashing the aiflow and exhaust plume in a complimentary way for the rear wing, connecting the airflow structures developed by the diffuser, exhaust, winglet and rear wing. 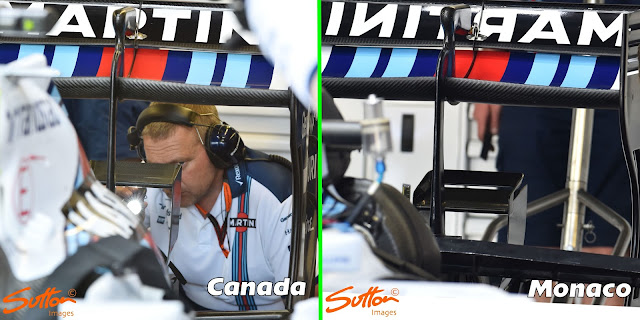 The Scuderia took the opportunity to improve the performance of their powerunit in Canada, spending 3 of the 10 tokens they had remaining for the rest of the season.  Although the FIA promised to include details of the tokens being spent in the GP documents this didn't come to fruition, and so although I'm speculating, it's more than likely they were spent improving the combustion elements, taking onboard the variable inlet system that others did at the start of the season. 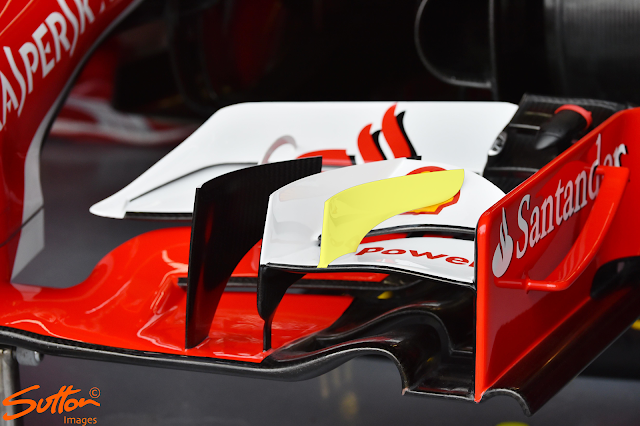 Having introduced their huge update packing in Spain it's hardly surprising that Ferrari didn't have much to bring to the race in terms of aero performance.  However, some small detail changes were made to the front wing, with the cascade winglet increased in size and its orientation changed (marked in yellow).  Whilst the upper flaps were also re-profiled in order to reduce downforce/drag.

Honda also took the opportunity to make changes to their powerunit in Montreal, spending 2 of their 9 remaining tokens.  Their focus was either on the Turbo or MGU-H with both replaced prior to the GP, whilst both of which could change how McLaren-Honda produce more power toward the top end.