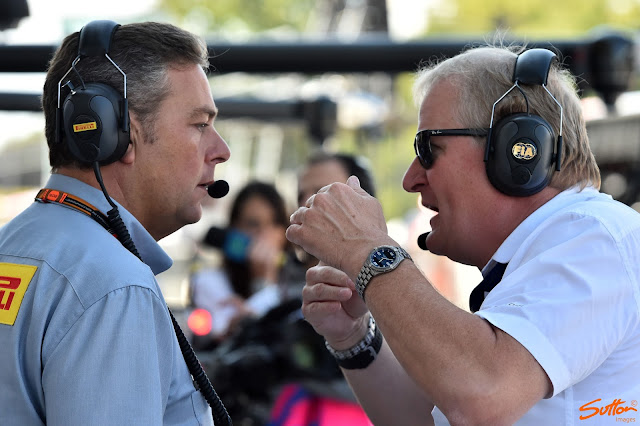 Formula One is a complex sport, for many one that cannot be easily understood.  A myriad of regulations, be it sporting or technical, allow the stewards to govern the actions of teams and drivers. However, on rare occasions there are situations that live in the grey and more confusingly for fans then it becomes about how each person interprets them.

Sunday was one of these such occasions, with it becoming apparent during the conclusion of the Italian GP that Lewis Hamilton's win was in jeopardy.  The advantage he'd accrued to that point had become almost unassailable but with a possible penalty looming the team asked him to push and build a gap to Vettel, Mercedes reluctantly showing their hand in terms of pace on their freshly updated powerunit.

As we know after the GP the stewards issued a statement suggesting that both Mercedes cars infringed on the new protocols laid down by tyre manufacturer Pirelli and the FIA.  Lewis and Nico's left rear tyre were said to be under the new prescribed pressure limit of 19.5psi before the race start ( 0.3 and 1.1 psi respectively).

In the meetings that followed Mercedes argued that a Pirelli engineer had tested the tyres as the cars left the garage to make their way to grid.  At this point the tyres were within the specified limits requested by Pirelli, however, as the 5 minute warning was given on the grid Mercedes engineers unplugged their tyre blankets, allowing the tyres to cool.  In doing so the pressure within the tyre lowers and it is at this point that without the teams prior knowledge to this new protocol Pirelli/FIA conducted another test for pressure and tyre surface temperature.

Mercedes were not made aware of the infringement immediately, rather it passed down the bureaucratic line, to the point where it would be investigated after the race.  The urgency placed on Lewis at the end of the race was in order to cover just one outcome, a potential time penalty that could be imposed on the driver.

So how did we get in this mess in the first place?

The controversy at Spa that saw Sebastian Vettel's tyre fail, whilst in touching distance of completing a one-stop race and collecting a podium, saw both Pirelli and the FIA make admendments to the minimum pressures that the tyres could be run at.  As performance is so heavily linked to the available tread platform an increase in pressures was derided by the teams and as such the benchmark fell throughout the Free Practice session.  Initially they intended to raise the pressure by 5psi, a figure that steadily declined until such point it was a mere 1psi increase.  The intent? well that's where the waters muddy and the one-size fits all regulation 12.5.3 comes into play:

If, in the interests of maintaining current levels of circuit safety, the FIA deems it necessary to reduce tyre grip, it shall introduce such rules as the tyre supplier may advise or, in the absence of advice which achieves the FIA's objectives, specify the maximum permissible contact areas for front and rear tyres.

The result of Pirelli's investigation into the tyre failures of Nico Rosberg and Sebastian Vettel in Belgium centred around a staggering quantity of cuts in the tyres (63), caused by debris that littered the track.  This was given as one of the reasons for the pressure increase, however, as the teams have continued to develop their cars and push the operating envelope of the tyre it was high time to reel them in, especially on a circuit that increases the demands on the tyres at high speeds.  A Trojan horse if you will, as although it does have a bearing on safety this certainly seemed to have some sway toward removing performance too.

So, how did Mercedes 'get away' with it?

As tends to be the case with these changes of protocol they aren't within the regulations framework, making them difficult to penalise.  Furthermore, there is an area of variability in the taking of the measurements because the full protocols hadn't been structured.  Having been given the green light by the Pirelli engineer as they left the garage Mercedes believed their task was complete, conducting their procedures on the way to the grid, at which point the tyres were placed back in the blankets.   The blankets were unplugged around the 5 minute warning, whilst other teams can and will keep the blankets on for longer.  This cooling period for the tyres is simply an operating criteria of Mercedes, they opt to do this as is their choice (we'll get onto why later).  The left rear tyre of the Mercedes and Ferrari cars were then tested for both pressures and surface temperatures, which should be 19.5psi or more and no more than 110 Celsius.

I can only assume that these tests were conducted in grid sequence (based on the chronological images below, copyright FOM/Sky Sports F1), starting with Lewis Hamilton down to his team-mate Nico Rosberg.
The fact these tests weren't all conducted at the same time would allow for the change in pressure between the two Mercedes drivers as the tyres continued to cool, remember this is a moving target regulated by heat, ie it would be interesting to know the difference in temperatures between the two silver arrows at the time the tests were conducted.  These temperatures/pressures would only continue to drop until such point that the drivers conducted the formation lap, exerting energy through the tyres would increase temperatures and therefore pressure.  How each driver conducts his formation lap is relatively precise with the driver following certain procedures in order that the car is primed for the start, with brake and tyre temperatures being of critical importance.  In this respect lower tyre pressures for the race start could yield an advantage for the driver, as maximising the tyres footprint could improve traction.  The instantaneous heat generated at a race start and oft aggressive use of the tyres in the opening laps means that the Mercedes drivers quickly build heat in the tyres which would also raise the pressures, normalising performance, tread platform etc.  It's just therefore one tiny building block in how Mercedes have opted to build performance and one that came under scrutiny from Pirelli and the FIA because of the fine margins they are operating at.

Tyre temperature and pressures are just one of the minuet details measured, collated and utilised throughout a race in order to extract performance.  As such the TPS (tyre pressure sensors) data is available to the teams and FIA, meaning they'll have understood how historically Mercedes have operated the tyres and perhaps even singled them out as they looked to enforce their change of protocols.  Furthermore, this could be used by the team as evidence that the pressures normalized during the race and was likely one of the determining factors in Mercedes not being penalised.

When the news of the infringement first surfaced I thought Mercedes and moreover Lewis' victory were in jeopardy, however, the tests conducted ahead of the Italian GP were far from thorough, lacked protocol and moreover inadmissable given the time delay between each measurement and the requisite loss of temperature.  Therefore, Pirelli and the FIA need to have a rethink.  For this to work on a consistent basis tyre blanket procedures must also be considered, which in itself brings headaches considering different teams use different suppliers.

Even worse the increase in pressure for Monza may be withdrew going forward in any case, simply because they were changed to meet the demands of the high speed circuit.  However, I don't think we have seen the last of this with the FIA/Pirelli likely looking at ways to have better control protocols going forward (think 2016 and beyond).

Pirelli have already insisted on better test conditions going forward should they retain their sole supplier contract and what we saw at Monza, for me at least, was Pirelli flexing their muscles, showing the teams that they won't sit in the shadows if their product is being bad mouthed.  Instead they'll come out fighting, adjusting things to suit their requirements rather than being led down a dark alley by the teams and drivers and coming out covered in bruises.
Tagged
Newer Post Older Post