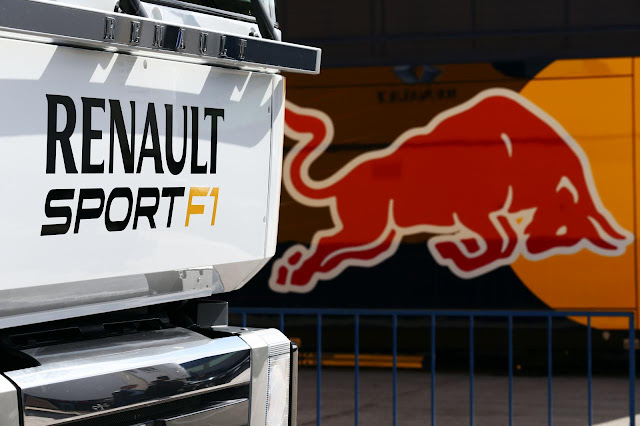 Renault went into the 2015 season having spent only 20 of their 32 tokens allowable for the season.  Had Red Bull and Ferrari been unsuccessful in lobbying the FIA to allow in-season development, owing to the missing homologation date within the technical regulations, those 12 tokens would have either been left unspent or left them rolling the dice on a powerunit specification that may have been worse than what they have.

Whilst the other manufacturers have made use of their remaining tokens throughout the season (Mercedes in Italy - 7, Honda in Canada and Belgium - 2 and 3 respectively (5) and Ferrari in Canada and Italy - 3 and 3 respectively (6)) Renault have yet to spend any of the 12 tokens they have remaining.  The manufacturer had initially targeted the Russian GP as the first time we would see a modified unit, with them likely to spend all 12 in one hit.  This was latterly delayed until the American GP, but now it appears in a story released by Motorsport.com this morning that the new powerunit will be delayed even further.

In honesty I am far from surprised, the less than acrimonious seperation of Red Bull from the engine manufacturer has left somewhat of a bad taste in the mouth of the latter and whilst Red Bull are eager for additional performance, Renault have to think about themselves.  Furnishing Red Bull and Toro Rosso with a new specification of powerunit at this stage may well be counterproductive to their long term objectives as they once again become a 'Works' team and manufacturer.

As the relationship between the two was already on the teetering point it seems that Red Bull's patience run out and the vitoral that they had been spewing about their partner intensified, leading to the inevitable rift becoming a separation.  Armed with the information about the manufacturers true defecit to their rivals it seems Red Bull saw no alternative but to cut and run, seeking out a new partner.  Meanwhile, with Renault investigating their options on a return to 'works' status they began a programme of self preservation.

12 tokens can change a lot of components but they need to be the right ones, the problem therefore lies in the execution of the spend.  It has been suggested that Renault were intending to spend their 12 tokens in one batch on the ICE, forsaking the other components and suggesting that Renault made some poor design decisions from the outset.  This is backed up by the installation of Mario Illien (Ilmor) at Viry by Red Bull, back when the relationship between the two could be saved.  Mario and his team worked on a parallel design to the Renault staff, creating a single cylinder prototype and presenting the results to both Renault and Red Bull alike.  Although pleased with the assistance that Ilmor provided, Renault dismissed the prototype and continued to develop their own, something which no doubt further angered Red Bull.


The 12 remaining tokens will now likely be spent at the one but last or last race of the season as Renault look to their plans for 2016.  Whilst you'd assume a 12 token spend should come with significant gains, given the strides Ferrari have made throughout 2015 with just 6 tokens, it could be argued that Renault will likely compromise the 2015 powerunit for better gains in 2016.  Meaning that the units supplied to the Red Bull teams could be down on power even further than their current counterparts.
Tagged
Newer Post Older Post