During the last few days I've been utilising a new tool developed in partnership with Shell and Scuderia Ferrari.  Their new website http://ScuderiaFerrariUncovered.Shell.com/ is a fantastic way for both new and old F1 fans alike to learn about the intricate workings of both the team and the lubricants that keep the SF15-T moving. 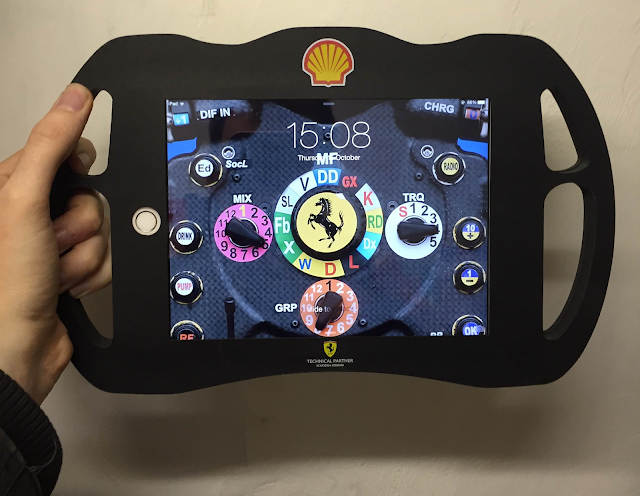 Shell have very kindly provided me with the means to access their platform in the form of an iPad encassed in a steering wheel.  It not only serves a very pleasing aesthetical purpose but as the website utilises a 360 degree FOV walk around environment I can actually use the iPad's gyro to move around too. 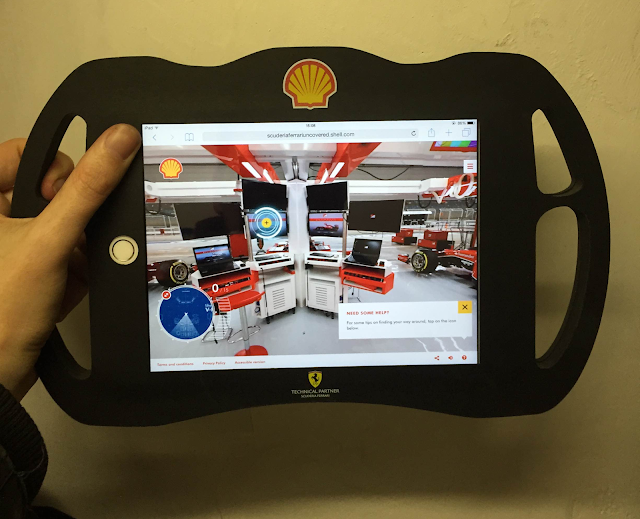 Once you've passed the first prompt screen you'll be whisked into the Ferrari garage where you can move around and delve deeper into what makes the team tick.  The drivers are on hand (in video format) to help you understand some of the more technical aspects of the Shell - Scuderia partnership.

Talking of their partnership, did you know that Shell has been working with Ferrari since the 1930's?  During which time they've amassed 12 drivers titles and 10 constructors championships.

Shell therefore has a track record to be proud of in Formula One, however past glories do not automatically guarantee success and 2014 was one of the toughest seasons in Scuderia Ferrari’s history. The goals faced by the two companies of developing a revolutionary powertrain, and optimising fuels and lubricants to meet last year’s new regulations, proved a real challenge. That challenge continues in 2015, especially as the sport’s governing body, the Fédération Internationale de l’Automobile (FIA), took the decision to relax rules relating to engine development for this year.

Shell’s Formula One project team continues to grow, with more than 50 Shell technical staff now contributing to the Shell Formula One programme with Scuderia Ferrari. These team members work together around the world in Shell laboratories and facilities, at all the race tracks on the Grand Prix calendar and alongside the team engineers in their Maranello headquarters.

Formula One allows Shell to test its Shell V-Power race fuel and Shell Helix Ultra with PurePlus Technology lubricant under the most demanding and controlled conditions. The learnings gained from working with Scuderia Ferrari are transferred directly to the development of Shell's premium commercial products for the road.  So. whilst we consider the fuel powering the SF15-T to be an exotic blend, you'd be surprised to know that 99% of the compounds used also feature in Shell's V-Max unleaded fuel used in your road cars.

Whilst the iPad affords the ability to move around the environment in a different way the website is brilliant fun on desktops and laptops too.  So, if you want to delve into the world of Ferrari and understand how their partnership with Shell helps them to achieve success give it a whirl, you won't be disappointed. http://ScuderiaFerrariUncovered.Shell.com/