Wastegate exhausts to be added in 2016 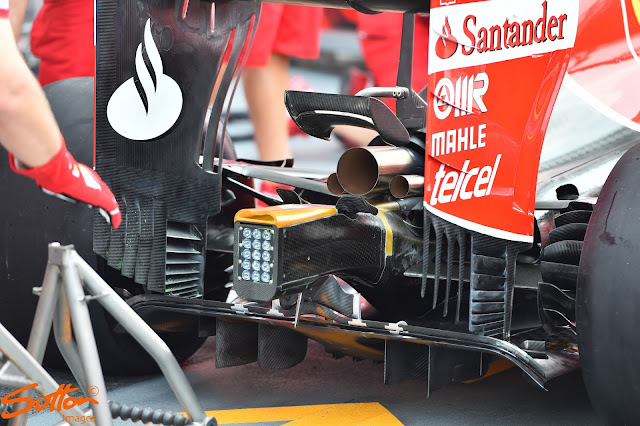 A fresh version of the 2016 regulations surfaced on the FIA website yesterday and provides information on the change to the exhaust regulations.  From 2016 the manufacturers will supply powerunits that have a seperate wastegate exhaust or exhausts:

Before you start jumping for joy at the prospect of a return to edge blown diffusers this won't be happening, as I have suggested in a previous article the FIA have prescribed the location of the exhaust outlet(s) and they remain on the cars centreline:

5.8.4 The last 150mm of each tailpipe must in its entirety :
a) Form a thin-walled unobstructed right circular cylinder with its axis +/- 5° to the car centre line when viewed from above the car and between 0° and 5° (tail up) to the reference plane when viewed from the side of the car. The entire circumference of each exit should lie on a single plane normal to the tailpipe axis and be located at the rearmost extremity of the last 150mm of the tailpipe.
b) Be located between 350mm and 550mm above the reference plane.
c) Be located no more than 100mm from the car centre line.
d) Be positioned in order that the entire circumference of the exit of the tailpipe lies between two vertical planes normal to the car centre line and which

As an aside the wastegate outlet(s) will occupy a much smaller space too:

That doesn't mean that the teams won't try to gain an aerodynamic advantage from the situation and just as we are seeing at the moment, it is likely that the components that surround the exhausts (like the winglets added to the Ferrari in Singapore above) will be shaped to garner an advantage, improving the connection between aerodynamic structures, such as the diffuser and rear wing.  You'll note I've very quickly added a smaller pair of wastegate exhausts either side of the main exhaust tailpipe in the image above just to give you an indication of what the future may hold.

The actual intent of the change in regulations is to improve the sound of the powerunits, although it is unlikely it will have the desired effect it.  Personally I feel there will be more to be gained in performance than there is in decibel level. It will also have a detrimental effect on the wake generated by the cars, harming the chances of overtaking.
Tagged
Newer Post Older Post