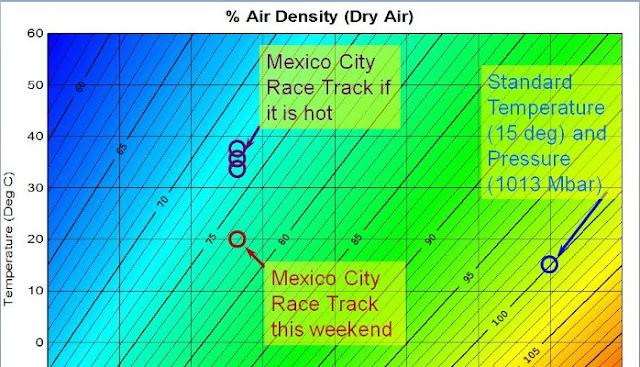 Mexico City (the track actually) is about 2285 metres above sea level.   That means that the actual atmospheric pressure is about 77% of the pressure at sea level.  Brazil is the next highest at 800 metres or about 92%.    Hence, Mexico City has 77% of the density, 77% of the oxygen for the engines (and drivers) but also 77% of the drag and downforce at the same speed.   Pretty simple really.  However.....   The heat created by using the engine and ERS systems may be down a tiny percentage but nowhere near that much.   For the engine, a fair percentage of the losses are created from frictional forces which will be similar.   The turbo will have to compress more volume of air to get the same boost pressure (in absolute terms) which will be difficult so it will need more energy to do its work.    In the end it all means a bit of an issue for the cooling system.   Fortunately, or unfortunately depending on how you look at it, the forecast is for cold wet weather so the teams that have done their homework will not have as much of an advantage as they will have hoped and planned to have....

Still I would not be surprised to see some teams taking extreme measures to keep certain sub systems cool.  The powertrain systems that give the most problems in hot conditions are the ones that have a small delta T.   If you have an oil cooling system that can run at 140 degrees and the air is at 30, a small change in temperature is not such a drama because you have 100 degrees of delta between ambient and liquid target temperature (so the percentage temperature change is small).  Aerodynamicists can allow for that with bigger cooling exits.   If the liquid has to run at 50 degrees, a small change in ambient air means a big percentage increase in cooling capacity (cooler size) to recover that.   When you operate at low air density all systems suffer similarly but those put near the edge, by say high temperature, will be in trouble first.   However, the cool temperatures this weekend should allow even those teams that are not fully ready to find solutions to the problems. 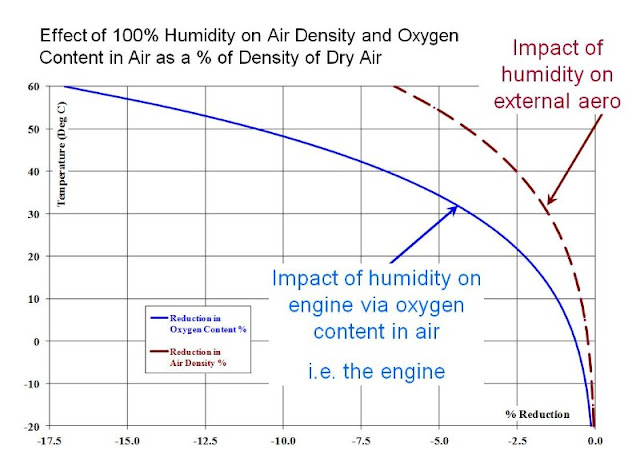 If it ever gets hot and humid together, then the engines will really suffer.  Water vapour is lighter than oxygen (and nitrogen and carbon dioxide) and, when it is humid, water molecules displace other air molecules.   The cumulative effect can be extreme (at high temperatures).   Regrettably though (hey, I like a challenge and a bit of drama now and then) with the cool conditions the teams get out of jail.

Brakes are going to be a cooling issue due to the high top speeds combined with low air density.   The turbo engines still have the same amount of fuel to burn so teams will find ways to burn it efficiently to make speed.  The low air density then resists the speed less and you have more kinetic energy to dissipate.  So lots of braking energy (spread over a slightly longer braking distance than normal because of the reduced downforce) and 77% of the normal cooling from the ducting.   Could provide an opportunity for a team that's ready for this.  Won’t be a race where cooling the rims and the brakes to the max will be a good thing to need.   The cool track temperatures likely for the weekend mean that it is unlikely to be a requirement so teams will be able to focus on brake cooling.

Hope it is an exciting race.   The last one was actually quite good.  Really interesting to see that the Red Bull in particular was good in the wet but, once power became important again in the drying conditions, they fell back.  Ferrari also didn't look so bad in the wet.  Still need a bit more power yet but they're getting there. 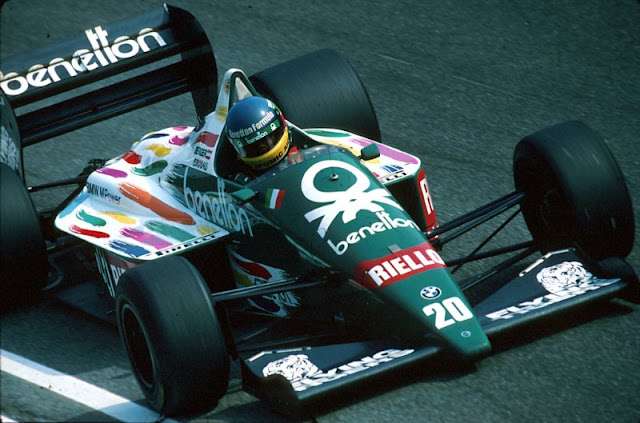 I was with the Benetton team in the 1980’s and the first race at Mexico (1986) was a thrilling one for me.  My lap simulation codes predicted our lap times and my printouts were on the engineering desk when, before any car had turned a wheel, Murray Walker came in to ask the question – “well boys, what lap time are you going to do?”.  He expected a rude answer but Gordon Message, the team manager, stepped over to the small pile of lap time printouts and looked at the top sheet, which said 1 minute 17.x seconds.   Murray was mightily impressed and wrote it down in his book.  He was even more dazzled when we did that time in qualifying (having never been there before).

Benetton were ready for Mexico with special BMW engines (no wastegates for example) and a monster cooling package (crude but effective).  In those days BMW had the most powerful engines – especially in qualifying trim – but they didn’t last long.  The slightly lower boost limit (which was all we could achieve at Mexico) meant that one of the cars finished the race.  The durable Pirelli tyres helped too and the team won the race.  Pretty good for a team that was midfield usually – and the team’s first, and “my” first F1 win.  Proud moments!