This is reblogged from Willem's LinkedIn account with his permission: https://www.linkedin.com/pulse/formula-1-performance-aerodynamics-willem-toet?trk=mp-reader-card 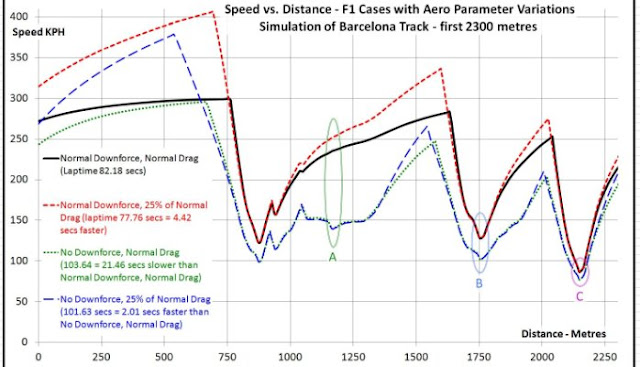 Aerodynamic forces are the number 1 performance-determining and differentiating factor in Formula 1 as well as in many branches of motorsport involving open-wheeled and sports cars.  That’s a pretty bold statement with the present state of powertrains in F1 but analysis says it holds true, despite big differences in powertrains.  There is still more lap time difference from aero than from power.  Red Bull have the problem that they are fighting other teams that also have great aerodynamics.

The plot shows speed (vertical scale) against distance (horizontal scale) for the 2012 F1 car I know well, along with several theoretical cars. The present generation of cars will have similar performance characteristics (but I am not permitted to show this data).

We all know that, speaking generally, the forces exerted by aerodynamics increase with the square of speed.  Perhaps that is why I am often asked “From what speed does aerodynamics make a difference”.   I think from the speed of a tight hairpin bend – in other words from nearly nothing.  You won’t get a big percent speed improvement in slow corners, but you spend “ages” waiting to be able to accelerate so even a tiny improvement will make lap time.  If you look at the plot showing speed against distance, perhaps it isn’t so clear.  So I’ve created a plot of the same data showing speed against time (two traces only).   The problem with a time plot is that the corners move to different locations so it is harder to compare.  However, if you focus on the area around 26 seconds where the “cars” are aligned in time, you can see how much more time it takes the car without downforce to cover this part of the lap.   So the long duration of slow corners means that aero is important there too. 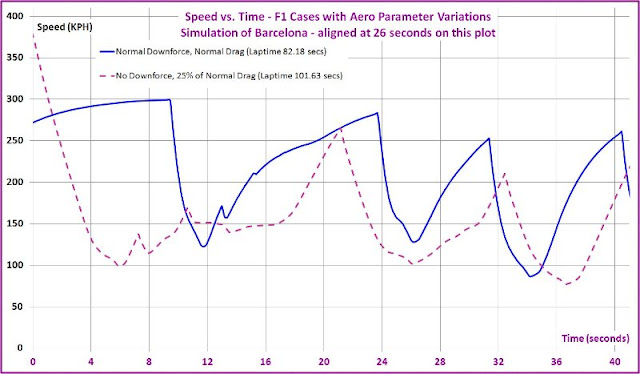 Speed against time.   Much harder to follow because the places on the track move about on the plot but it should be clear that the car without downforce (which also has very low drag) takes much more time to get around the corner centred around 26 seconds than the car with downforce.  The other corners would show the same trend if they were aligned.

Back to the first plot, which shows how downforce and drag can influence the limit speed of a car over part of a lap of the Barcelona track.  Zero downforce is certainly achievable but getting the drag down to 25% of today’s real car values is probably not possible for a legal F1 car.  No problem - what we are trying to look at here is the limit of performance.  That’s why I’ve chosen such an extreme drag reduction (to give drag the best chance I can to influence performance).

The curves are created using lap-time simulation software, which is regularly validated against real-car performance.  It is assumed that other parameters such as tyres are at the same performance level, which is not strictly realistic but that is not that important for the purposes of this discussion.  Removing downforce increases lap time by more than 20 seconds.  Reducing the drag of the car to just 25% of its real value, gives much less than 5 seconds of lap time gain, and just 2 seconds if you have no downforce.  Why does the gain vary due to downforce level?  If you are at the cornering limit because you have no downforce, a drag reduction is not going to help much until you get to a straight and only then once you have enough grip to use all that power.  Alternatively, if you can fly around the corner because you have grip, your average speed is higher and you will have to ‘fight’ drag more, using power – so a drag reduction will help you more in those circumstances.  In low-speed corners little power is needed to maintain speed, so reducing the drag has almost no effect.  In high-speed corners the influence of drag can become quite significant.  However, it makes 10% of the difference you make with downforce and that is with lower drag than can actually be achieved..

In extreme cases, e.g. when all cars are easy flat though a given (very high-speed corner), then the situation changes and, practically speaking, only drag will be important.  Teams take this into consideration when selecting the downforce level for a given race track as the ideal compromise changes.

The designs of the race tracks in many ways drive the compromise teams use for selecting the drag level of the car used for their development work. 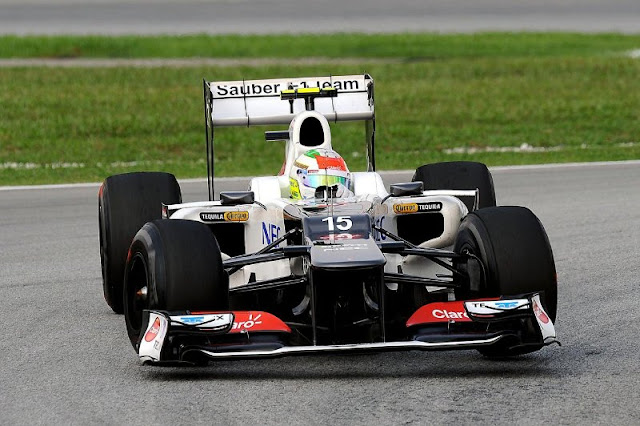 Sergio Perez in the 2012 Sauber Ferrari F1 car – I am not sure who to thank for the picture (Sauber Motorsport I believe).   The designs of the race tracks in many ways drive the compromise teams use for selecting the drag level of the car used for their development work.  Modern tracks tend to be centred around a restricted spectator area.  This means they have more corners and shorter straights.  That drives designs in the more extreme direction of downforce (rather than worrying about drag).

Looking at today’s Formula 1, it is clear that both powertrain and aerodynamics are critical to performance.  For a privateer team, modifying the engine is not realistically an option.  I say realistically also because the engine would need to be re-badged.  This is something that only Red Bull could afford to do.  For a factory team, both clearly need to be at the highest level.  However, recovering from a deficit in powertrain will cost more than recovering from an aerodynamic deficit.

P.S.
Here's an alternative way to see how time plots stretch low speed corners.   The same car plotted from the same start and finish places on the track.   Same data. The two lines are speed vs. distance and speed vs. time.   Time squeezes the high speed and stretches the low speed.   Lap TIME is important.... 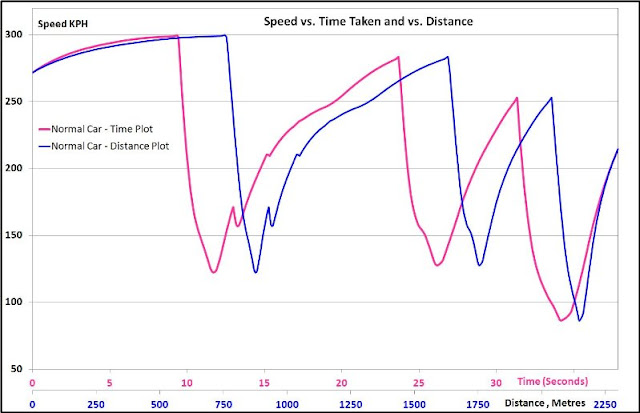