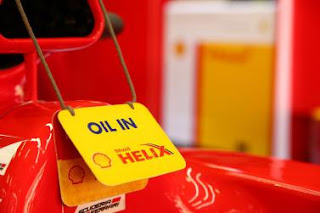 Shell conducted a Google hangout after the Abu Dhabi GP, some snippets of which can be seen below.  One of the takeaway stories from the hangout was when Guy Lovett delivered the news that of the performance gained by Ferrari during 2015 Shell contibuted 25% through the development of their fuel and lubricants.

We've known for some time now just how important fuel and lubricants are in this 'hybrid era' but a contribution of 25% of the total gain during the season is staggering.  Going to show just how important it is for the engine manufacturers and their fuel/lubricant partners to work in unison to improve performance and efficiency.

That 25% increase in performance for 2015 has come via the innovation partnership that Shell and Scuderia Ferrari enjoy, with in-season powerunit development providing a clear pathway to this.  Ferrari deployed 22 of their development tokens before the season commenced, leaving 10 to spend throughout the 2015 season.  Ferrari waited until Montreal to make any changes, deploying 3 tokens on what was believed to be changes focused on combustion.  Undoubtedly these changes were made in consultation with Shell, as together they would be able to unlock further efficiency and performance from the use of different chemical compositions, otherwise not acheiveable with the previous components.

Whilst the FIA failed to keep their promise of informing of us of what the manufacturers were changing, Ferrari used a fresh I.C.E, Turbo and MGU-H for Monza.  We do know they spent 3 tokens at this event, with changes likely being made to the I.C.E and Turbo, releasing further performance from not only the parts that were changed but also from a change to the fuel and lubricants.

The scheduling of token spends also had to coincide with powerunit component usage, so it was imperative whilst Shell and Ferrari sought to improve performance this did not come with the detriment of unreliability.  Any changes beyond the allowable four unit allocation per driver results in a grid drop come race day and so the chase for performance has to be measured against this risk.

With four tokens left to spend, Ferrari initially scheduled a further powerunit upgrade for the US GP, however, they delayed their introduction.  A technical directive issued by Charlie Whiting had cleared up a matter that suggested as long as it could be proven that parts had been bench tested that the tokens could be used without having to run the parts on the car.   So, whilst it outwardly appears like Ferrari left 4 tokens unused, they'll have been spent on developments for the 2016 powerunit.

In its most recent meeting, the WMSC ratified several changes to the token system for 2016 which should help Ferrari to make up ground on Mercedes.  Rather than having to homologate the powerunit before the 2016 season starts, the manufacturers will once again enjoy the freedom of in-season development.  Had they already sought to deploy their full quota of 25 tokens on the 2016 powerunit, they'll be glad to know that the WMSC also cleared all of the manufacturers to spend 32 tokens in the coming season too.

The continued success of the innovation partnership between Shell and Ferrari will be imperative, as it continues to bring additional performance, efficiency and reliabilty to the track.

As an aside I also find it fascinating what the cross-over could be with Shell providing fuel to the World Endurance Championship, especially given how aligned the hybrid powerunit regulations are.
Tagged
Newer Post Older Post